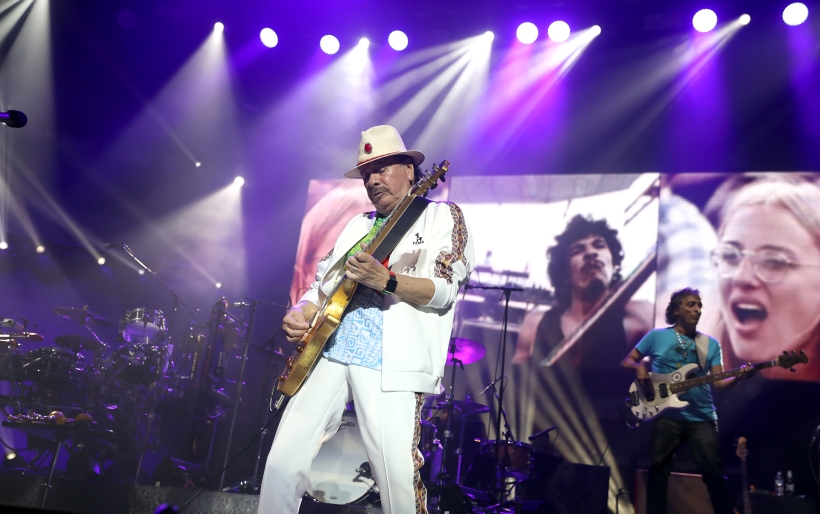 It can be easy to take Santana and Earth, Wind & Fire for granted. Both have logged 50+ years with 20+ albums, basked in the glory of global hits and powered through leaner moments to the side of the spotlight. Their presence in the great conversation of social media ebbs and flows. But putting these rock veterans on a summer shed tour together acted as a potent reminder of their prowess and impact, their collective power to uplift, and the teeming crowd in Camden last night most definitely knew how special it was to be living in a time when both are not only active, but operating in excellent form. 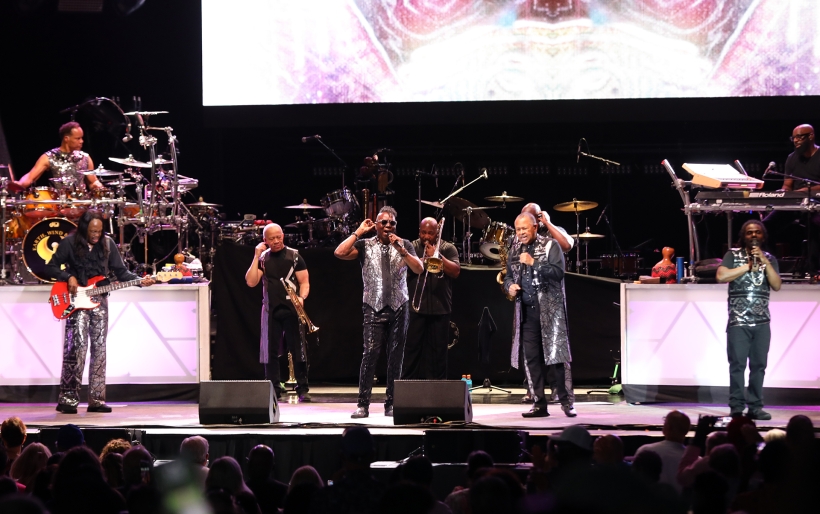 Leading off the bill, the rock and soul army Earth, Wind & Fire veered between funk odyssey, warm sentiment, and dancefloor-packing hit parade. Founding member Verdine White’s bass playing remains a propulsive frenzy 52 years into the band’s career, and a segue from “Let Your Feelings Show” into “Mighty Mighty” into “Celebrate” was quite the workout. As band and crowd caught our collective breath with “Keep Your Heads To The Sky,” singer Philip Bailey asked everyone in the place to light up their cell phones in tribute to loved ones lost during the pandemic; it sparkled in the sundown over the venue’s vast lawn. A swoon-worthy “That’s The Way Of The World” led us into “Boogie Wonderland,” which brought the amphitheater to its feet through “September” and beyond.

In the headlining slot, Santana could have gone any number of ways. Would they lean on their heady pyschedelic jams? Their bouncing cha-cha bops? Their chart-breaking 90s hits? The answer: yes. Walking onstage to a montage of indigenous celebrations cut alongside vintage festival footage, Carlos Santana quietly picked up his guitar and began to shred, easing with his eight bandmates into “Soul Sacrifice,” the solos-on-solos rager that made the band a breakout hit of both the Woodstock festival 53 years ago this week, and of the Michael Wadleigh documentary on the festival the following year. Clips of that iconic performance ran on a screen behind Santana, making for a poignant “how it started / how it’s going” moment — his playing is still nimble and jaw-dropping, legato moans bending and breaking into high-speed triplets — it just has a much higher production value. Classic rock staples “Evil Ways” and “Black Magic Woman” quickly followed, front-loading the show with 70s faves, but equal time was given to other pockets and eras of Santana’s work as the show moved ahead. 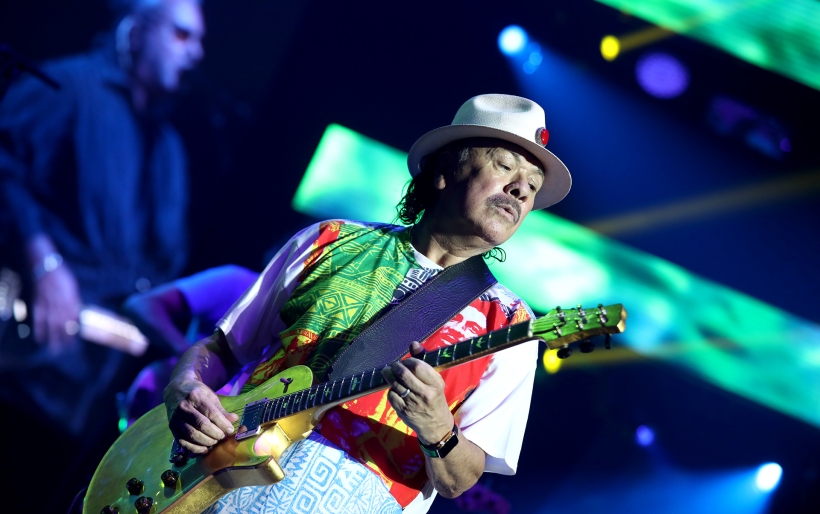 Some eras fared better than others. A sing-and-dance-along to the iconic “Oye Como Va” was followed with a racing performance of the somewhat deeper “Everybody’s Everything,” but the latter saw the band’s grip on the crowd loosening for the first time in the night; “Peace On Earth” was a lot of sappy hope-and-love sentiment from second guitarist and vocalist Tommy Anthony, but it had folks lifting their cell phone lights again; for his part, Santana seemed to love soloing along with both.

He also knew when to step aside and let the other musicians shine, something that could be this revered rocker’s secret weapon. As much as his is the name of the damn band, and as much as different iterations of his face were everywhere in the venue from posters to shirts to album covers, Carlos Santana makes an admirable point of having it not be all about him. His drummer and spouse Cindy Blackman Santana got her first big rhythmic spotlight of the night on “Jin-go-lo-ba”; percussionist Paoli Mejías had time to shine on “Evil Ways”; bassist Benny Reitveld ripped a deep solo on “Everybody’s Everything,” then locked into a funky Primus-esque jam with Blackman. For his part, Carlos stood to the side of each featured instrumentalist, cheering them on. 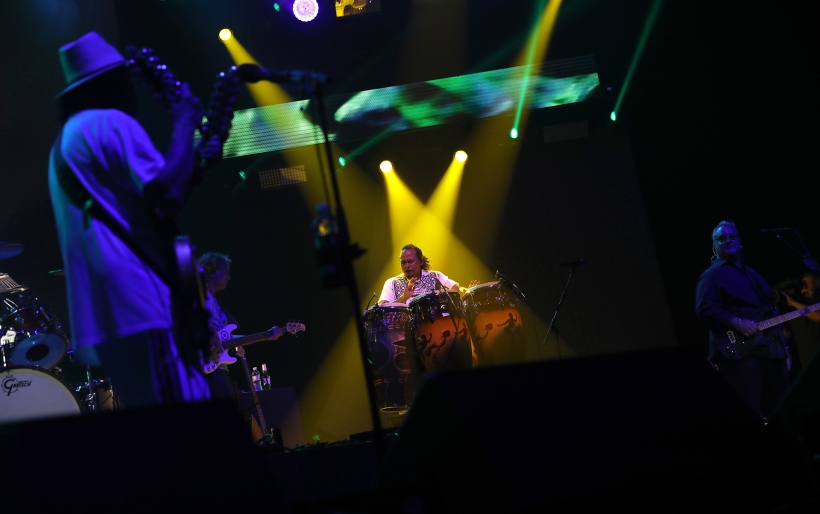 This connection led to a fluid and fun set. “Europa” got a touch of The Beatles, “While My Guitar Gently Salsas” style, while “(Da le) Yaleo” dove delightfully into deep disco rhythms. The latter’s Supernatural counterparts all landed spectacularly, “Corazón espinado” being a late set highlight, and while it’s easy to be cynical about “Maria Maria” and its silly meta-fumble “sound of the guitar played by Carlos Santana” lyric, hearing it and watching the audience groove to it was a delight. Like that album, Santana’s current offering Miracles and Blessings is imbued with collaborations, and though it hasn’t yet generated the chart success of its older cousin, Santana in his banter seemed deeply committed to the project’s vision of “mystical medicine music to heal a twisted crooked world infected with fear.”

It’s a mouthful, but translated rather well into the Chris Stapleton collab “Joy,” and Santana’s message was equally concerned with ideas of faith and spirituality as much as it rejected narrow doctrines that divide humanity. It embraced individuality, being your truest self and loving one another’s truest selves alongside you. “Don’t let anyone tell you you’re less than divine,” Santana said as the show wound down, and clearly this idea of celebrating the multitudes we contain is something he puts into practice, from the cosmic energy of Abraxas’ “Toussaint L’Ouverture” to the unstoppable hooks of “Smooth.”

Check out photos and setlists from the show below; Santana and Earth, Wind & Fire’s tour continues tonight in Bristow, Virgina.