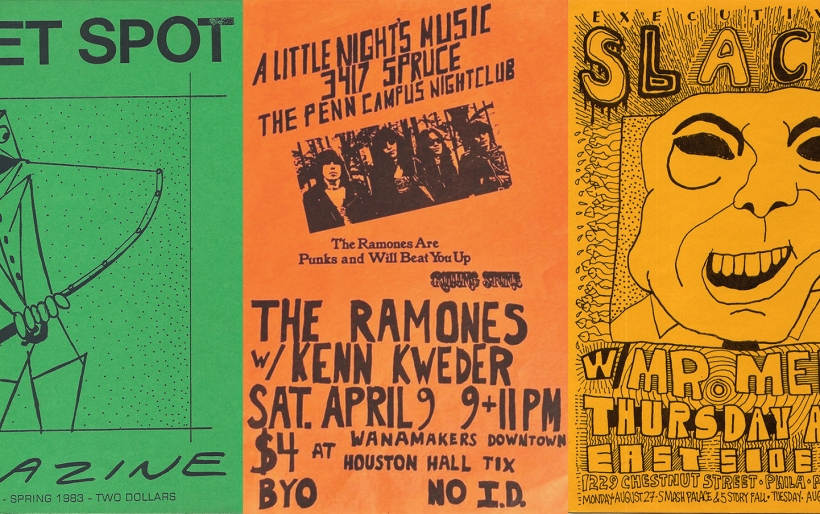 Curated by Shea in collaboration with local musicians from the punk era, the small exhibit is filled to the brim with things to see and hear.

Hosted at the quaint hidden gem that is the Neon Museum of Philadelphia, Art/Rock/Revelry is a wonderful exhibit highlighting the late 70s and 80s era of Philadelphia’s alternative music scene. From experimental music that made the abrasive punk rock look tame to the more “clear cut” artists, the exhibit acts as a time capsule for the musical revolution Philadelphia experienced in the later 20th century, especially when paired with an oral history and archive of music and people whose efforts would have otherwise been lost to time.

Curator Alyssa Shea sat down with me to talk about the origins of the project and how it exploded into something much bigger than expected; with each new person she met came another handful of people she “just had to talk to.” The exhibit also touches on the current music underground of Philly and how the landscape has changed but still has many parallels to the 1980s underground scene. Read on for more; Art/Rock/Revelry is on display through September 18th. 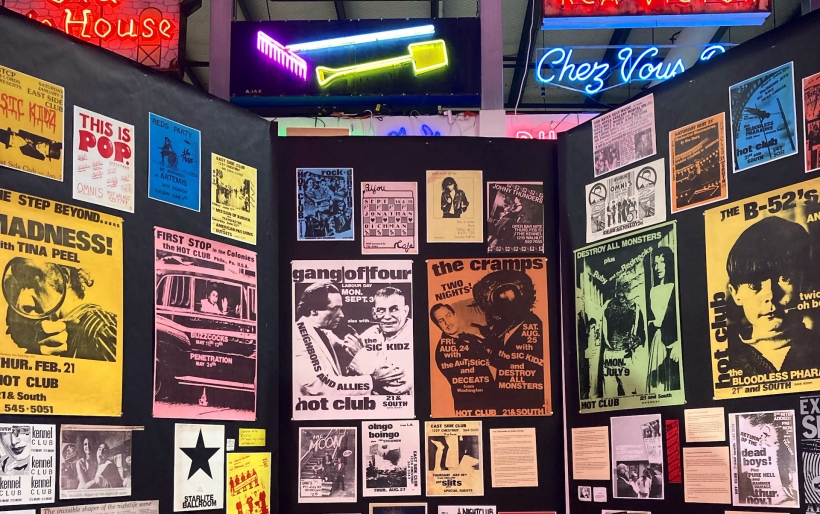 Will Kirkpatrick: What are the Origins of this project?

Alyssa Shea: It started with Max from Brewerytown Beats; he has a label where he does Philly reissues. And through that process is a music archivist. So he came to one of the early exhibits related to the South Street renaissance from the 70s. He said it would be cool to do a Philly music history exhibit and “if you want any help, I have these archives.”

So when we made our plan for our 2022 shows, we decided on doing some kind of Philly Music history. I was put in charge of that and reached back out to Max to see if he had anything in mind since Philly has such a rich history, from the Sound of Philadelphia, Sigma Studios. He said he was picturing something about the Art rock or late 70s mid 80s era because it was such a fruitful era. And the DIY spirit matches the vibe of the museum in a lot of ways. And a lot of people focus on the R&B and the Sound of Philadelphia era, so it would be nice to give some attention to Philly music history that may not be as well known.

Max then said he is holding onto archives from this drummer, Jim Meneses, who played with the Stick Men and organized shows. And invited me to come check out the collection and speak with Jim. So that’s where it started, and it all just steamrolled from there.

WK: So you got most of the collection through Jim and people he knew?

AS: It started with his [Jim] collection and his work, looking at his show bills and seeing the bands along with a double tape comp in the 80s that also covered a lot of the big bands at the time. So I started reaching out to people through someone named Joey Bruno, who runs Joey Bruno Music Archives, [and] started a bunch of Facebook groups dedicated to keeping the social aspect and the memories of some of these clubs and bands alive and archiving that era. He helped me sort out who to talk to and from there it really became an insane spreadsheet of every person I talked to, and [everyone] gave me like five to ten more people I “need to talk to.” I tried to talk to as many people as I could given the time I had.

WK: Even now, thinking if someone came up to me, I could suggest like a million people I’d want them to talk to. And every person has a different story of how the scene affected them. Whether they were a musician, artist or fan.

AS: I really tried to tap into some representation from different sides of it. I have things from musicians in these groups, show bookers, tastemakers; like Bobby Startup who was a DJ and more of a tastemaker at the time and he helped run and book a lot  of the clubs and introduced this new music from the UK to this scene and really cultivated the punk and alternative kind of music.

And there are some people featured prominently who have incredible collections but purely from the fangirl / audience perspective; People who collect all the setlists, people who always ride the rail at the front of the stage and were so deeply involved in that sense. And other people like Jere Edmunds, he helped work at the clubs. So I tried to get a little piece of everyone, obviously I couldn’t get everyone.

WK: What is your goal with the exhibit, is it more to educate or preserve or…

AS: A little bit of both. Overall the Neon Museum itself is dedicated to preserving Philly history that might be sort of outsider. Not outsider arts, but we present a lot of the neon kind of as a folk art its a form of art that takes many many years to perfect and lots of skill. But there is such a handmade quality to it and it’s totally unique and it’s also very much related to Philly history. So in that way I was trying to achieve the same effect with this exhibit. Similar to neon signs, they are made to be commercial signage. They were made to draw people into a shop and might not immediately be looked at as artwork, it might be purely utilitarian in some people’s eyes. But similar to these flyers, when you really start to look at the flyer art, the creativity and innovation that went into creating the art. Like the start of the cut copy photocopier art. Again, purely amateurish in a certain way, but some of these artists went to become very successful working artists. Like Matt Marrello who did a bunch of art for clubs — and there was a commercial sort of purpose behind it, but it stands on its own as art and it goes in Philly history as a really rich contribution to Philly culture.

This whole music scene was quite influential, but it doesn’t necessarily get its due. So there is that educational aspect of letting people know about some of these bands that were quite influential in terms of genre, like industrial rock. The Executive Slacks (Matt Marrello) was this industrial rock group that I believe influenced Nine Inch Nails. So there is an educational component, a preservation component, and just bringing attention, because a lot of the people involved are still around so I really wanted to collect the oral history just as a preservation technique to make sure these stories are captured before people die. And renew some interest in some of this music that might have gotten lost along the way but is still really good.

WK: There is the internet, so the archival work is kind of being done for us, but do you still see a place for something like a centralized database or something? After this is over and for contemporary music.

AS: It’s something I have been thinking about. I basically created all of these “assets” in some way, especially the video interviews. They are good preservation techniques and are files that shouldn’t just live on my hard drive, [but] where they’ll live I’m not sure. Someone came in, one of the musicians involved and he currently works for the Academy of Sciences or something, he gave me the idea to digitally present this stuff after it comes down from the walls. All of these are scans, so I already have these digitally archived already and at this point the logical step would be to turn it into some digital presentation. Whether it be a website or something for people to explore after it comes down. And at our opening I met someone from the Philly Music alliance and I think they are very much interested in pushing forward things like this. They are interested in covering music history beyond the big ones. Maybe there is a life beyond it in that realm. But I am definitely open to any suggestions.

A post shared by Neon Museum of Philadelphia (@neonmuseumofphiladelphia)

WK: There is the visual, music, and posters aspects. It also feels like it has to be a whole experience you wrap yourself in so it is hard to convey it.

AS: People have expressed interest in it becoming a traveling exhibit in some form or another. Again, if someone wants to touch base and run with that idea I am always open to exploring something like that. A lot of people are still working musicians or own record shops around Philly, so there are a lot of ways to continue supporting this scene and its contributors. But in terms of presentation it would be cool if it translated into something more permanent somewhere.

WK: What is interesting is seeing all the different perspectives from these people and also seeing how that affects how they come at the exhibit. Someone younger like me sees this and all of this feels so familiar but it is also so different. And the people from this time looking at this exhibit are looking at this like a time capsule.

AS: And part of what I wanted in terms of styling the whole thing was to make it feel like you are stepping into a life sized scrapbook. It might be visually overwhelming, but the whole Neon Museum is kind of a maximalist playground; put it all up there and let people experience it how they want to. They can read or look as much as they want.

WS: With your own art, how has this inspired you, either as you have been putting the exhibit together or just being a part of the music scene?

AS: It has helped me have a greater understanding of where I came from. I wasn’t really all that into punk in general so it has helped me become more educated in its roots. My own band has a post-punk sound and when people would write about us they would reference this era of sound. And I would look up these names but never dove too deep. Also just the whole understanding of where DIY came from too. Doing it all ourselves because it is so hard to get signed to a label at this point, it is very inspiring to see. There really is power in just doing it yourself.

Art/Rock/Revelry is on display at the Neon Museum of Philadelphia through September 18th. For hours and tickets, visit their website.