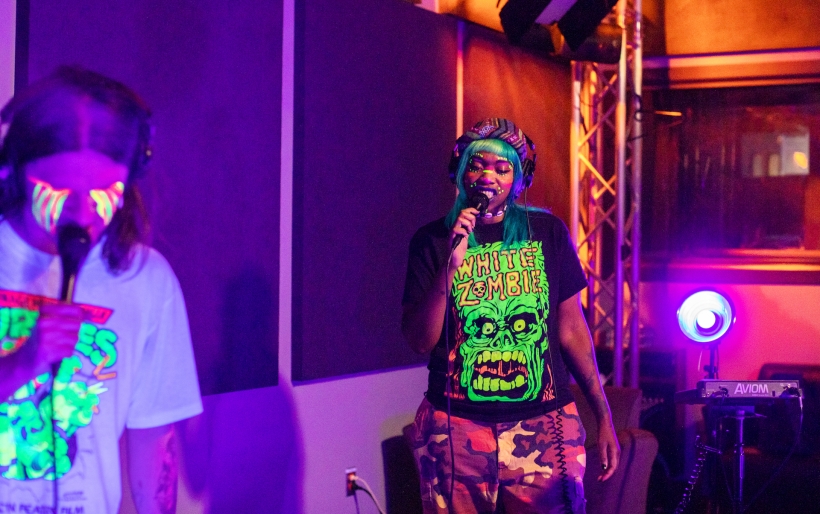 The first time I saw Ghösh was at the legendarily unhinged West Philly spot Cousin Danny’s, where they played a packed house opening for gritty noisemakers NAH and Deli Girls; it was the thick of January in 2020, the floor was shaking, the room was sweaty, and the duo’s high-BPM fusion of electronica, punk, and rap took the energy higher and higher.

Centered on charismatic vocalist Symphony Spell and beatmaker/hype person Zachary Fairbrother, Ghösh has been active since 2018, and released an impressive run of singles on Philly-rooted label Get Better Records; this 2020 interview with Alex Smith chronicles their foundational years, but since the return of live music a year ago, Ghösh’s profile has only expanded. With blown-out drum samples and chopped-up guitar riffs, fierce bars that are stridently pro-party and anti-police / anti-racism, and a look that bathes day-glo facepaint in moody blacklight and vintage t-shirts, Ghösh is an aesthetic unto themselves: part juggalo, part basement show punk, part art gallery provocateur.

And it makes you want to move, whether that movement be slam-dancing or just plain dancing. You can’t not feel the energy listening projects like last year’s Alien Nation, and seeing them perform makes it that much more visceral. For evidence, check out Ghösh’s Key Studio Sessions set below — two songs from Alien Nation, their ACAB-themed single “Dear Daddy,” and the newer Prodigy-esque banger “Testin’ My Raver” — and let that be a solid argument for seeing the duo in person. Next gig: opening for freaking My Chemical Romance this Saturday at the UBS Arena in Belmont Park, Long Island (tickets here); closer to home, you can see Ghösh this October playing Johnny Brenda’s with Screaming Females for Philly Music Fest.