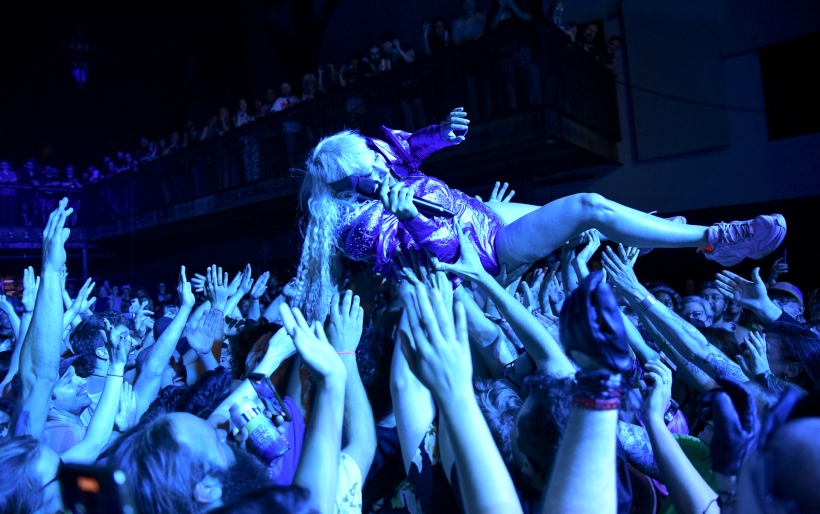 It has been 20 years since the album The Teaches of Peaches reset the culture, forever unlocking and opening thousands of doors to sexual expression and identity in indie music. The teacher herself, Peaches, decided an anniversary tour was in order for her most notorious album. And she was right: Union Transfer was packed with glitter covered Philthadelphians this past Tuesday night. 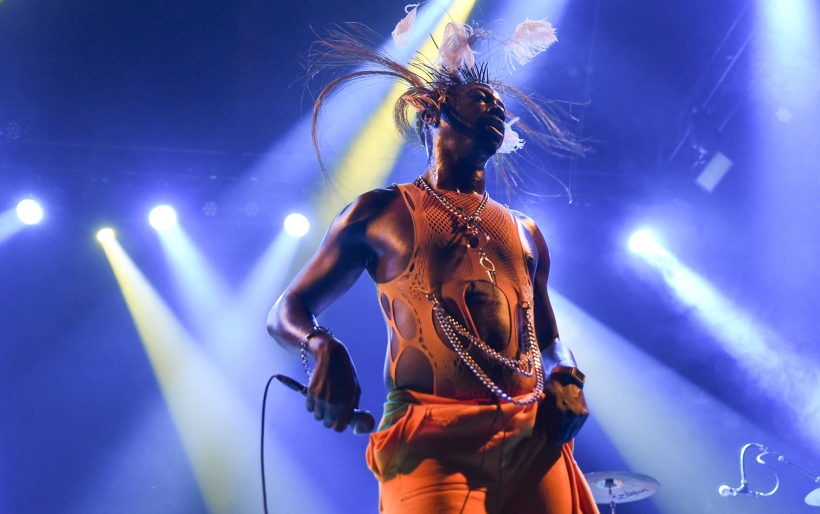 Opening up was NYC rapper/producer/dancer, Kalifa, whose next-level look included a take on an upside down hoodie pair of pants and an earthy headpiece. Their command of the stage was full of readiness, and the songs ranged from melodic playfulness to intense spitfire lyricism. They paired each track with custom-fitted movement that fully captured the crowd’s gaze and refused to let go.

“Buzz” and “Wut” off 2014’s Hey exhibited that range, both undeniably twerkable.“Koi” off Riot Boi is an entity all of its own, thrusting the rush of dancehall songs upon everything in its proximity. In other words, there wasn’t a still body in Union Transfer that night.

Before ending their set, Kalifa jumped off stage to make their way over to stage right where the fans that knew all the words were. In the glow of iPhones, Kalifa and the fans played off each other during the song. 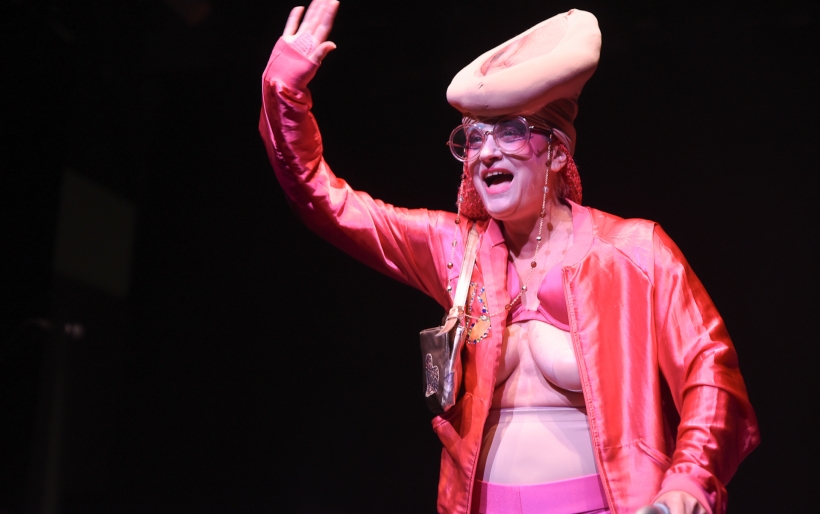 When Peaches entered the stage, she did so with a walker, a gaudy metallic purse and a vaginal headpiece.After facing the crowd and retrieving her glasses and microphone from the purse, fans could see that she was wearing an “aged” version of her outfit for The Teaches of Peaches, a matching hot pink bra and briefs. She also wore a satin baseball jacket with “1966” in big glittery numbers on the back. The skit, which led into “Set It Off”, was that special brand of cheeky self-awareness and flamboyance that sealed the deal for the Union Transfer crowd.

Philly hits a soft spot for Peaches: “You’re all filthy! I’m not calling you Philly, just Philthy!” she said, very pleased with herself.From then on the affectionate nickname for the Union Transfer crowd stuck.

One minute she’s wearing a jacket with hair extensions lining the sleeves and belting her heart out. The next, two of the background dancers with plastic baby faces are being birthed from underneath all pink fabrics sewn together, or a clear inflatable tube rolled out from stage that Peaches walked into the crowd through (the fans were there to hold a foot). One of Peaches exits from the stage was just a lone fart into the microphone. 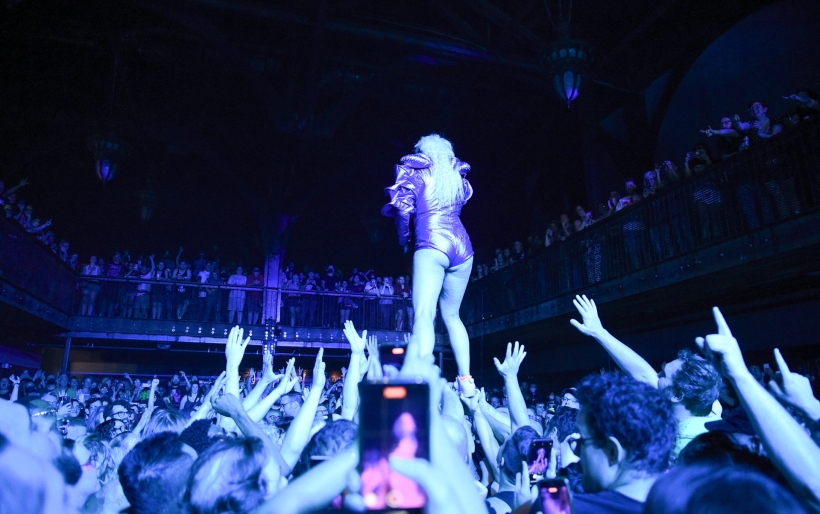 Midway through her set, Peaches decided to do a straw poll by asking if this was their first Peaches show. The majority of the main floor and the balcony raised their hands. In her signature crassness she said, “Well that’s a lot of people to deflower.”

Peaches didn’t just play off of The Teaches of Peaches; the now very sweaty Union Transfer also got the rock anthem “Boys Wanna Be Her” off 2006’s Impeach My Bush, a chunk from 2015’s Rub — like “Dick In The Air”, “Vaginoplasty” and the title track — and last but not least, Peaches’ COVID banger “Pussy Mask,” which ends with a Dr. Fauci name drop.

As the set appeared to be winding down, Peaches teased that they had played everything and nonchalantly exited the stage. After the stage hand hyped up the crowd with a red wig waving a flag with “ABORTION” on it and a surprise woodwind performance by a gentleman Peaches had met earlier that day, Peaches played “Fuck the Pain Away.” 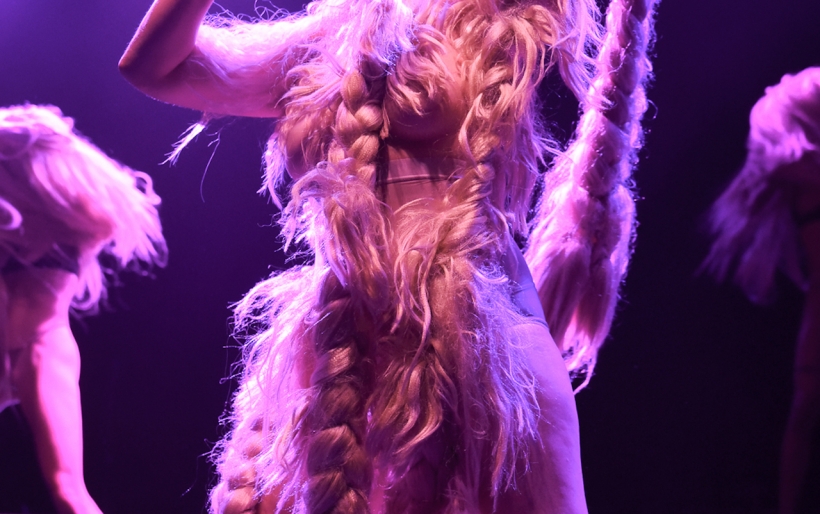 However, in a double fake-out, dancer/guitarist Bláthin and dancer/drummer Teddy rallied Peaches back to the stage. She returned wearing a harness with long strands of blonde hair and silicone boobs attached. As the few piano chords came in, it was clear that a cover in some shape or form of Celine Dion’s “It’s All Coming Back To Me Now” was about to occur.The rendition quickly divulged into Mad Libs territory after she started changing the “touch” in the lyric “touch me like that” to anything one could possibly do with a consenting partner(s).

Peaches played with the crowd by going completely silent after a few bars or leading the crowd in a silent back and forth wave. Each pause would erupt in laughter coming from the crowd and a little smirk from Peaches too.

Even though the crowd knew exactly what was coming during the Celine Dion cover, they relentlessly sang, cheered and called out suggestions for different “touch” substitutes. While some shows fall silent after the band has left and the music stops, Peaches’ Tuesday show ended only when the bubbly conversations and laughing of Philthy could no longer be heard in Union Transfer.