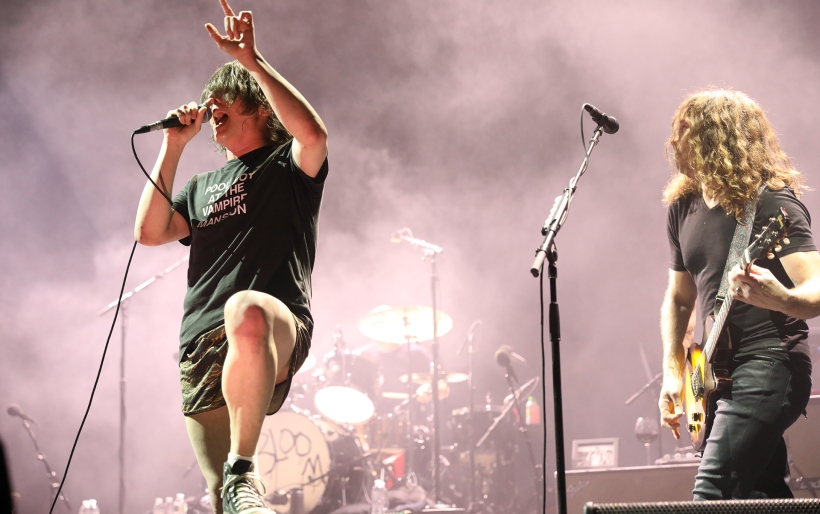 Give ‘Em Hell: My Chemical Romance reunites and rages at Wells Fargo Center

When I was a young boy – which, sure, what a cliché way to begin talking about My Chemical Romance…but I promise you it’s the truth – I lived in the city, and a friend took me to see the band. It was spring of 2003, and she’d heard great things from people back home in North Jersey, where the Way brothers and co. were beginning to make a lot of noise on the local punk scene; I was just down for a show, but firmly enmeshed in the era’s Strokes / BRMC / Walkmen school of disaffected retro-cool. Seeing fashion-conscious bands stoically rock their sets for themselves, seemingly unaware of or uninterested in the spectators in the room, was my benchmark for normal and good; I was not prepared for the energy of a wired, wild and somewhat campy goth-adjacent band stomping the stage and staring down the front row, engaging their fans directly and with bold theatricality.

I was, at best, perplexed — and more accurately bewildered; here were these musicians, playing the dumpy North Star Bar as though it was a packed house at The Spectrum (RIP). They were aware this was definitely not an arena, right? But as their breakout album Three Cheers For Sweet Revenge orbited my listening the following year, and The Black Parade drew me fully in three years later, I understood: what I initially misread as delusion was actually ambition and aspiration.

My Chemical Romance always planned to be an arena band; they also never planned to stop being a punk band. Throughout their career, they’ve wrestled with the push / pull of those seemingly opposing forces, and as we saw last night when their reunion tour hit Philly, they’ve found a way to be both things at once. In short: they played Wells Fargo Center like it was The Fire. 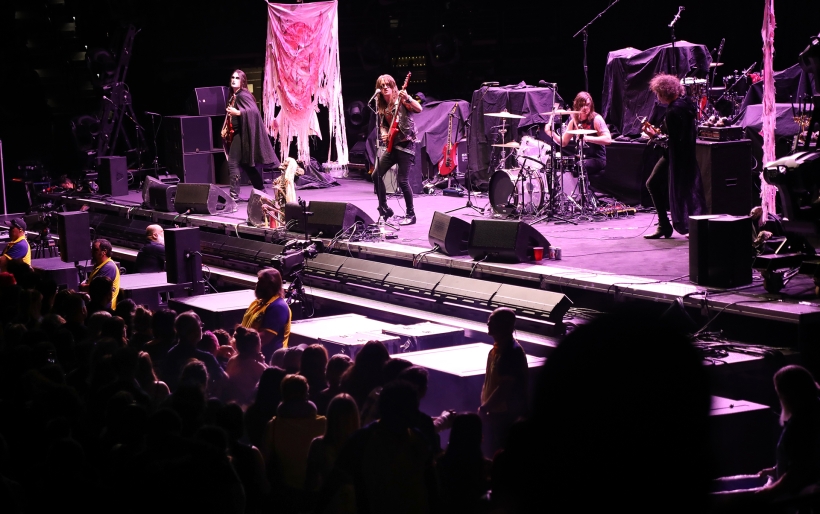 This began with their opener; Philly’s Devil Master, a doomy four-piece clad in shrouds and corpsepaint, surrounded by prop (I think?) skulls. They blasted through a gripping set of gnarly thrash and grind, wailing guitar solos and guttural vocals. It was delightfully evil, and certainly not the norm for a corporate venue that was just moments earlier flying LED screen banner ads for Bud Light and SeatGeek pre-show.

My Chemical Romance’s approach to openers on this tour seems to follow this pattern: different stops have different support, tapping into and uplifting regional artists from outside the mainstream who could use a bigger platform. (At a Long Island gig over the weekend, the band booked Philly electro-punk duo Ghösh to kick off the show.) It’s a very punk thing to do – here I’m using “punk” in the sense of compassion and community – and the headliners’ set also reflected that spirit. 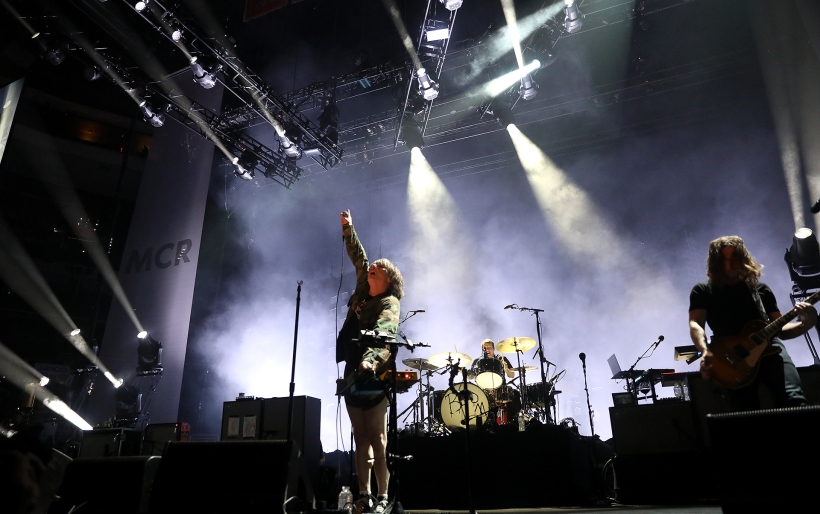 After a pensive ten minutes or so of rumbling sound design and drone, My Chemical Romance made their entrance with this year’s six-minute burner “The Foundations of Decay”; it’s their first new song since 2014, and one fueled by arena anthems, prog, screamo, and scorching post-rock. Beginning the show on an epic note, the band kicked right into the frenzied bombast of two Sweet Revenge ragers: “Thank You For The Venom” and “Give ‘Em Hell Kid.” As he did at the North Star some 19 years ago, frontperson Gerard Way paced and growled, flailed his hands in the air and struck poses, got in the faces of fans (as much as he could when separated by a security barricade). He was at once a band leader commanding the masses and a guy who rushed right from a Senses Fail circle pit to the microphone.

The slow-burning catharsis of “Welcome To The Black Parade” hit massive stratospheres, especially with the 15,000-strong crowd singing along, but it was not the set-closer, nor was it the final encore, as it might be in other bands of their stature. One of My Chemical Romance’s biggest and most beloved songs was just casually dropped in the middle of their setlist, falling between the chugging punch of “Our Lady Of Sorrows” from their 2002 debut I Brought You My Bullets, You Brought Me Your Love, and a deep pull for the EP track “Mastas of Ravenkroft.” 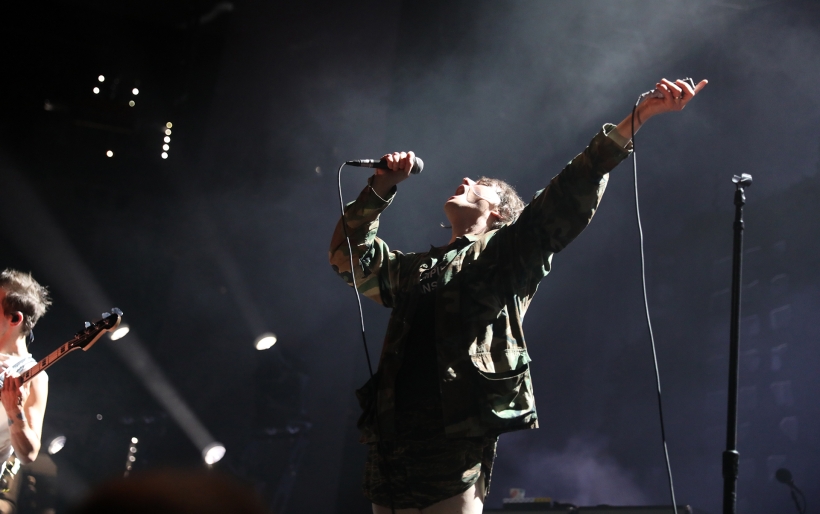 It was a very punk way to structure your setlist – here I’m using “punk” in the sense of subverting mainstream ideas and expectations – and it kept this audience of devotees on their toes, screaming along to favorites like “Helena” and “I’m Not Okay (I Promise),” gasping excited gasps when the compilation track “Boy Division” popped up in the mix, and feeling warm and fuzzy when the Danger Days single “Na Na Na (Na Na Na Na Na Na Na Na Na)” was dedicated to a fan named Indy going through a tough time. There was a striking intimacy to this very large concert, between stories of the band’s first Philly show which, yes, actually was at The Fire (“the artist Santigold booked us, we were billed as The Chemical Brothers, and still nobody came”), thoughtful pauses where Way asked the crowd to step back and give the folks up front some breathing room, the humorous send-out of “Teenagers” to the band’s family members in the house with apologies for all the couch-crashing, and the collective shedding of actual tears on the show-stopping “Famous Last Words.”

That last song was, in a sense, a microcosm of the show as a whole. At its core, whatever scope or setting they are found in, My Chemical Romance’s music confronts dark and desperate times and emotions, dives deeper than many folks might find comfortable into those corners of the soul, but also celebrates the act of overcoming adversity and fear, offering hope and many many lyrical mantras for those in the thick of it: “I am not afraid to keep on living. I am not afraid to walk this world alone.” It was a perfect sentiment for a society paralyzed by the unknown and too often afraid to go one’s own way.