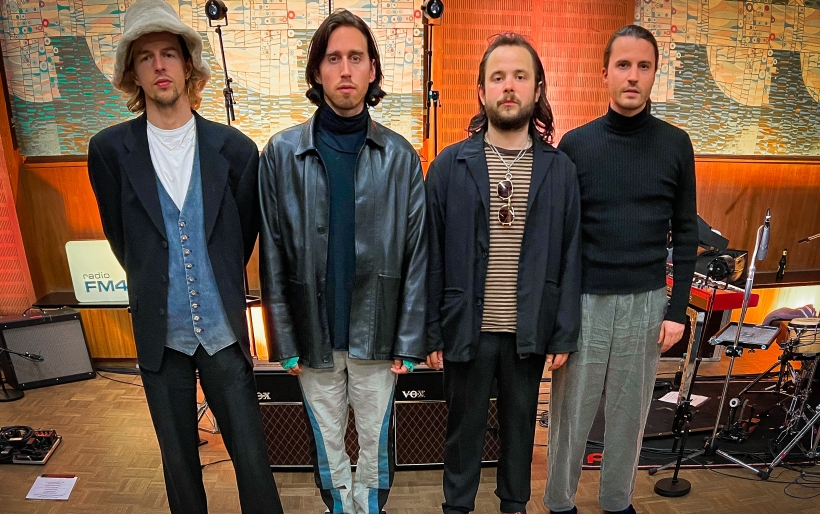 We didn’t realize quite how big they were until we landed in Vienna — Bilderbuch stops by for a Sense of Place: Vienna studio session in the middle of a sold-out arena tour.

You’re about to hear a session with one of the biggest — if not the biggest — rock band in Austria. But here’s the thing: We didn’t realize quite how big they were when we booked them for our Sense of Place: Vienna series. It wasn’t until we were actually in Vienna that we started to get it — because any time we’d walk out of the FM4 radio studios in the days leading up to recording this session, there was a chance someone would come up to us asking how they could get in; how they could get on the list to see Bilderbuch playing live for World Cafe.

Bilderbuch stopped by to play for us when they were in the middle of a sold-out arena tour. Since they started putting out albums in 2009, they’ve won awards, they’ve opened for the Rolling Stones, they’ve played outdoor shows in Vienna for 15,000 people a night. And they’ve brought their larger-than-life, completely captivating energy to the studios of FM4 for our tiny, exclusive World Cafe audience — and now, to you. Their latest album is called Gelb ist das Feld, and they begin with a song from it called “Golden Retriever”… I’m so excited to share this session with you.

Audio & Video Produced in association with Radio FM4. Special thanks to Austrian Music Export and Austrian Music Export (especially Arianna Fleur Alfreds) for connecting us with bands and various other cool corners of Vienna’s music scene. Thanks to Florian “Floxe” Parzer for mixing this session.