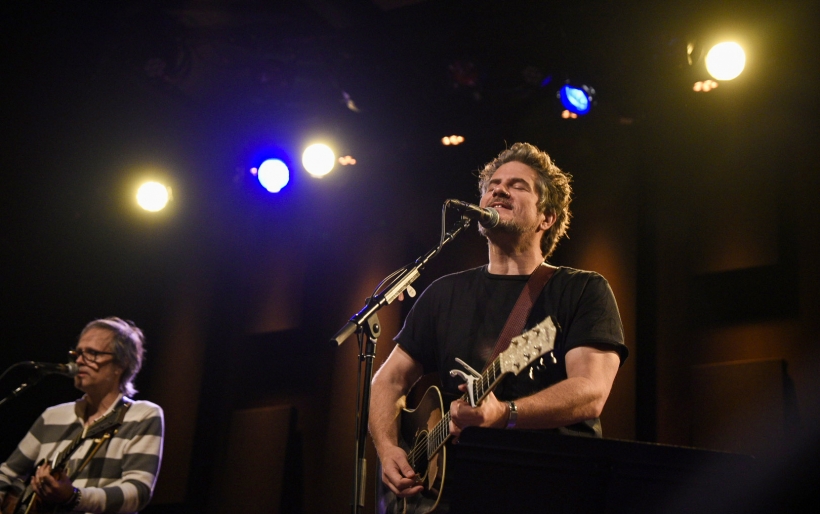 The singer-songwriter favorite kicked out Labor Day weekend with a lively Free at Noon set.

“I got a little bit of tour throat,” said longtime WXPN favorite Matt Nathanson at the top of his Free at Noon set. “So we’re going to do things mellow. Like Cat Stevens in the 70s mellow.”

This was the vibe of Nathanson’s Free at Noon performance today. Backed up in stripped-down configuration by Adam Popick on bass and Aaron Tap on guitar, Nathanson showed off his 2022 record Boston Accent, dug into his back-catalog, and brought a lot of humorous banter to the show for his trademark mix of heartfelt songs and comedy.

Between funny bits about 976 numbers becoming his new side hustle, and drivers listening to the radio, Nathanson shared vulnerable, melodic songs like “Soundtrack” — which he said was “written about my wife, the greatest human being I’ve ever known, and the greatest teacher” — and the title track of his new Boston Accent — which was about having an “unrealistic view of hometown I was born 3000 miles from where I came alive.”

Kicking off the Labor Day weekend with this gig, Nathanson also took us back to 1999 for a couple selections from Still Waiting For Spring, including the Dawson’s Creek-featured “Used to Be,” which he recalls getting its first plays on WXPN, and the set-closing “Little Victories,” which Nathanson took a serious moment to talk about the importance of compassion and coming together despite differing views of the world. “It’s really important that we coexist,” he said.

Listen back to the show below. Matt Nathanson plays The Keswick Theatre tonight; more information can be found at WXPN’s Concerts and Events page.