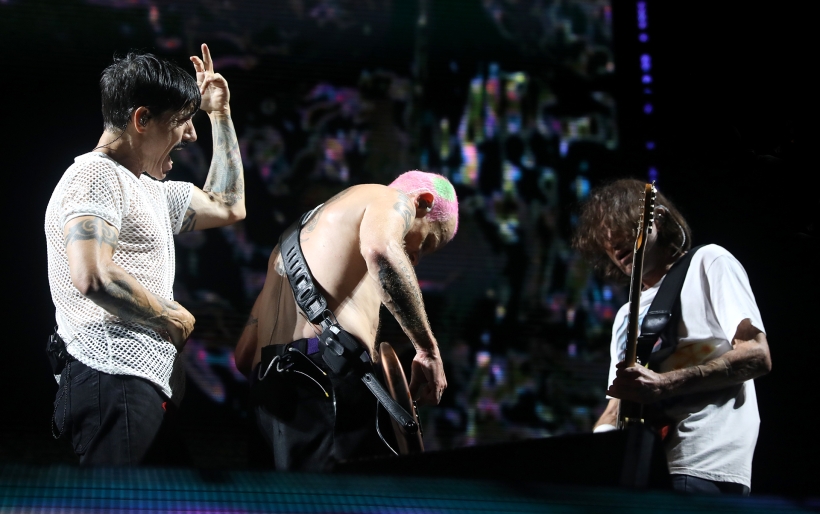 The late-summer stadium show also featured The Strokes and Thundercat.

Conventional wisdom dictates that the closer a concert gets to stadium level, the more strictly structured it tends to flow, keeping things light, familiar, and somewhat scripted, with the sure-fire crowd pleasers never far away.

Cali alt icons Red Hot Chili Peppers have never been one to follow convention (or wisdom for that matter), and while it might have been easy for them to make last night’s Philly concert at the sold-out Citizens Bank Park a non-stop hit parade, playing to the fickle attentions of the middle of the road, they chose another direction. Copious improv and heady jamming; a heavy pull on this year’s rather good Unlimited Love; jokey deep cuts and covers; and, yes, hits, but possibly not the ones you were expecting. It made the show infinitely more interesting knowing that this crowd of 43,000-odd Philadelphians was watching a band that was as in-the moment as they were. 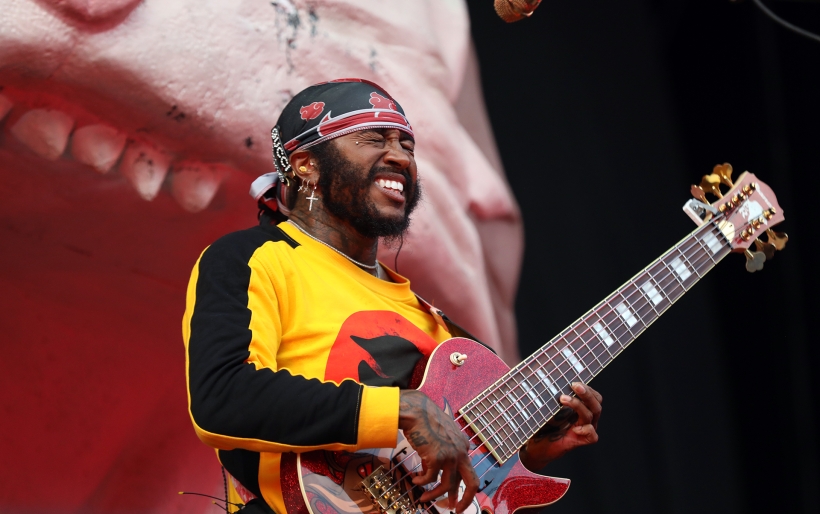 Getting things started when the sun was still high in the sky, Los Angeles bass virtuoso Thundercat played in jaw-dropping trio configuration with keyboardist Dennis Hamm and drummer Justin Browne. The hammering prog-level instrumentals “Lost In Space / Great Scott / 22-26” and “Innerstellar Love” extended to a ten-minute expanse of bass licks, airy keyboard solos, and high-octane rhythms, but the slick soul of “How Sway” dialed the edge down to a soft melodic groove, with radiant vocals from Thundercat welcoming the incoming audience to their seats. 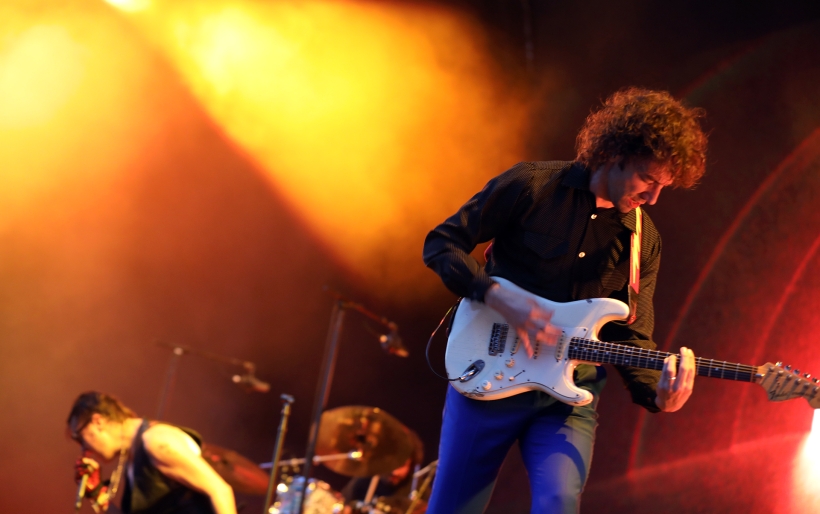 The Strokes | photo by John Vettese for WXPN

In the middle slot, New York-rooted rockers The Strokes showed how, 21 years in, they’re still rocking tight, take-no-prisoners sets that are compact and commanding. Ten songs, 50-something minutes, no encores…which, okay, they weren’t headlining, so there wouldn’t have been an encore anyway. Still, that’s not all that different from the way The Strokes played their earliest Philadelphia gigs, which frontperson Julian Casablancas fondly reminisced over. “We’ve played Philly the most of anywhere else but New York, we used to come here all the time back in the day,” he said. “But this is the biggest place we’ve played in Philly. It’s a hell of a lot bigger than the Khyber Pass.” Lead guitarist Albert Hammond Jr. gazed in wonderment out at the stadium crowd between songs (and during songs), and throwing it back to those early Philly days, the band got a healthy dose of Is This It into the mix – “Barely Legal,” “Hard To Explain,” and “Someday,” bangers all – though it was terrific to hear how well “Bad Decisions” from 2020’s The New Abnormal mixed with its older cousins. 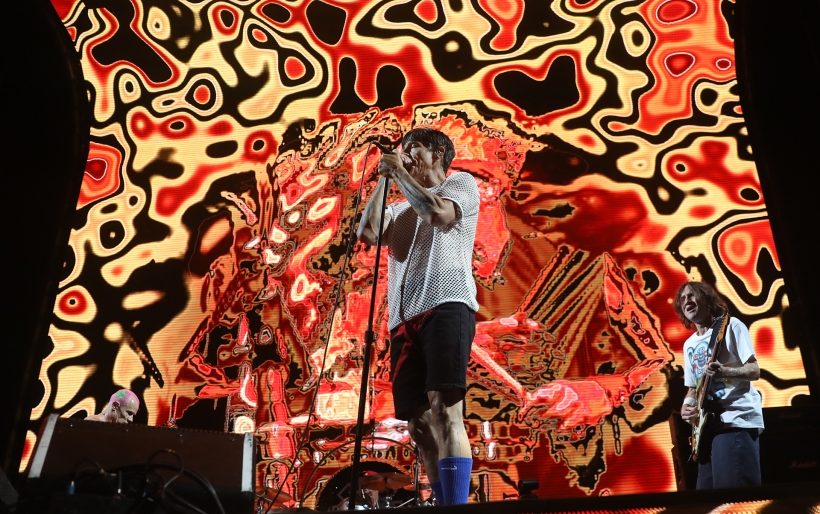 As they’ve been doing at every show on their Unlimited Love tour, bassist Flea, guitarist John Frusciante, and drummer Chad Smith started it off with a positive jam – a raw and raucous instrumental mesh of slappy low-end, moaning lead licks, and knockout rhythms to get the energy high. What was surprising was how much the Chili Peppers came back to this format throughout the night. True, lead vocalist Anthony Kiedis was a dynamic, hype, can’t-take-your-eyes-off-him presence the second he stepped to the mic to groove to the classic Californication opener “Around The World,” but as the show went on, he spent a decent amount of time dancing as his bandmates riffed, sometimes off to the side, other times getting in close to goad them on. Sometimes he stepped offstage entirely to give the harmonic journeys of Flea and Frusciante playing forehead-to-forehead their space to shine.

The chemistry of the Chili Peppers that’s most often celebrated is that of friends-since-childhood Kiedis and Flea, but the bassist and guitarist clearly have a deep musical connection of their own. They’d noodle with one another between songs before Smith slammed a downbeat to get the show back on track; they’d stretch out introductions sublimely, keeping us guessing what song was about to touch down next – as we heard on the Unlimited Love single “Black Summer” as well as an encore of the 90s hit “Soul To Squeeze.” Perhaps this chemistry is why Frusciante keeps finding his way back into the RHCP fold, and why the band’s most lasting material is stuff they made with him. 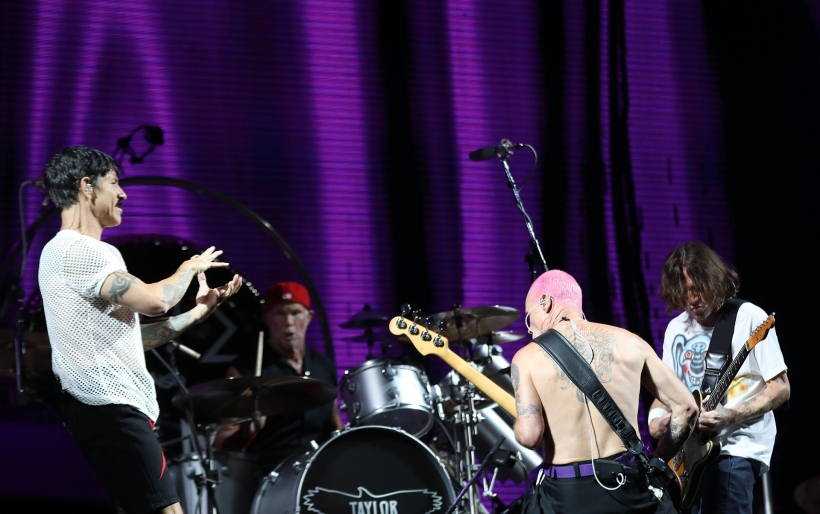 About that: a nonsense song such as “I Like Dirt” might be a throwaway in different hands, but it rocked terrifically here; the quirky “Aquatic Mouth Dance” from Unlimited went hard, and slid sweetly into a roaring “Snow ((Hey Oh))” from Stadium Arcadium. That album’s somber “Hey” was a beautiful moment of reflection before the punkish brawl of “Me and My Friends,” the oldest Chilis song of the night and one of only two that came from an album Frusciante didn’t play on. (The other was the goofy Flea solo song “Pea” from One Hot Minute, which was fun to hear but would have been funner had Flea not forgotten the line calling out “homophobic redneck dick[s],” but alas.) Origins aside, Frusciante was clearly the MVP of this production — even his off-the-cuff version of Elton John’s “Your Song” was lovely — and as such had his own cheering section in the stage left corner of the crowd.

Of course, all these freewheeling roads led to set-closing smashes “Californication,” sung at the top of Kiedis’ and the capacity crowd’s lungs, and “Give It Away,” certainly among the band’s horniest moments, and one that had people on their feet and getting down in the aisles…even if, possibly maybe, it might not have aged the greatest. But that’s the dichotomy of Red Hot Chili Peppers; they offset the raunch that made them cult faves with reflective sincerity that made them stars, and all the pieces came together on the grand finale “By The Way” – the somber melody, the driving punk, the bopping funk, the spitfire rapped bars, everything the Chili Peppers do coalescing into a perfect three and a half minute song. There was no better way to end the night, even if we never would have guessed that’s where it was going at the start.