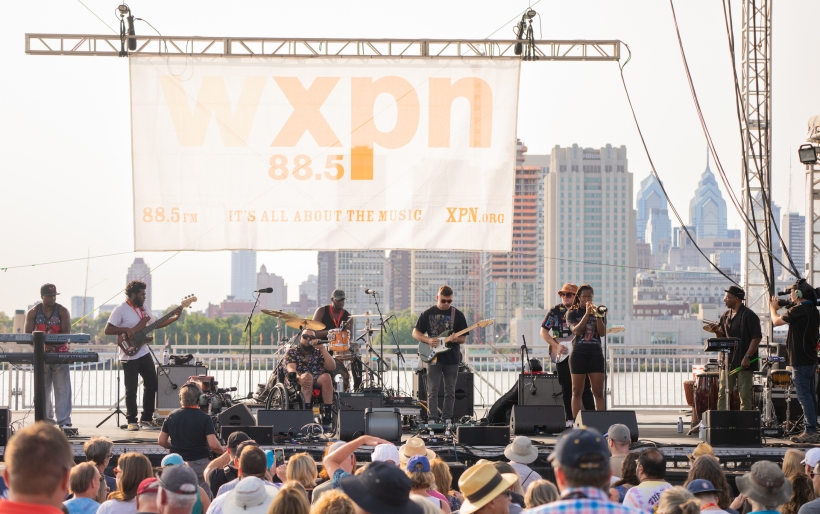 The Philly collective guided the crowd into that happy hour sweet spot as the sun slowly descended behind them.

With all due respect to The Tisburys and Tamino – whose sets were excellent in their own right – Omar’s Hat was the first band to really get the crowd moving at this year’s XPoNential Music Festival. The shape-shifting local 8-piece collective which features, per their website, “local artists and musicians at free flowing jam sessions,” was today led by local singer Ryan Gilfillian (brother of XPoNential-vet Devon Gilfillian), and featured Camden star trumpeter Arnetta Johnson, versatile bassist Doc Downs, and many others.

The first to grace the River Stage, Omar’s Hat brought fans a set of covers — including a perfectly sultry cover of Usher’s “Nice & Slow” and Bobby Caldwell’s ““What You Won’t Do For Love” — that guided the crowd into that happy hour sweet spot as the sun slowly descended behind them.

The Friday afternoon audience was more than happy to oblige, quickly making their way over from the Marina Stage to catch the third set of the day. The lawn filled with chairs, chairs that were quickly abandoned, as Omar’s Hat revealed themselves to be a band demanding movement. This came to a head toward the end of their set, when Gilfillian asked the crowd whether they might want to hear some Stevie Wonder. This, as you might expect, was very much a rhetorical question. Everyone wants to hear some Stevie, always.

Still, their rendition of “Superstitious” was especially effective, leading to dozens of gyrating hips, tapping feet, and nodding heads. Omar’s Hat seem to be a band that will give you a new and exciting show each and every time out, and we got a good one on Friday afternoon at XPoNential Festival.