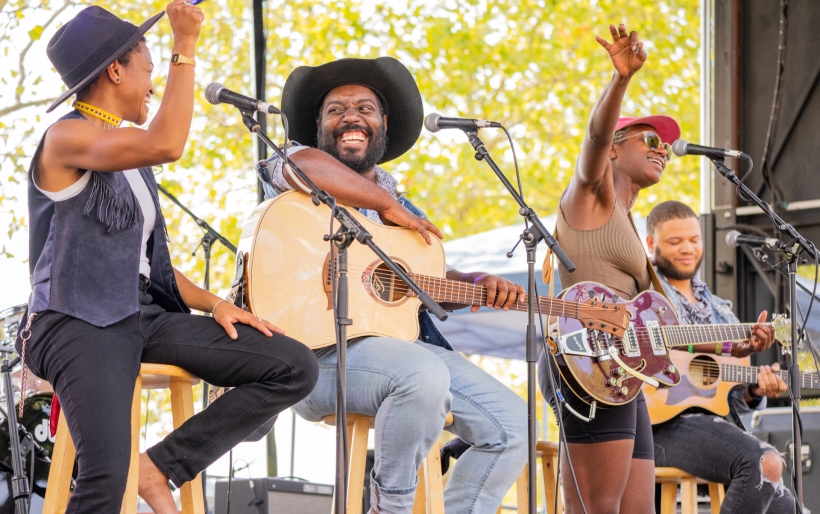 As the live music world was re-opening in 2021, Holly G — a writer, flight attendant, and country music fan from Virgina — decided to do something about a huge gap she saw in her favorite genre. She launched the Black Opry — first as a club night, then as a touring showcase, and an online network — for Black singer-songwriters working in folk, Americana and country, who often don’t get the platform they deserve.

“The whole reason I started doing this was because I did not see people in country music — and that includes the fans, the executives and the artists — that looked myself,” Holly said in The Washington Post. “It was one of those moments where it just felt historic, and like something important was happening.”

When the Black Opry Revue recorded a live session at WXPN Studios for World Cafe back in February, XPN’s Bruce Warren was so blown away that the process of booking a showcase for XPoNential 2022 began that day. Flash forward seven months, and the Black Opry Revue held court on the Marina Stage of Wiggins Park today.

Each artist had their own story to tell, some taking a broader societal perspective — Philly’s Sug Daniels explained that her song “Kitsugi,” a reference to the Japanese art of repairing broken pottery with gold, was a reflection on how to heal a broken world and make it stronger. Tylar Bryant used humor to address anxiety around the world’s post-pandemic re-opening — “I’m not upset about the world getting shut down, because I’m an introvert,” he said — and the playful “Outside The Box Of Wine” used wordplay to depict coping methods in isolation: “let’s get a little high instead of getting merlot.”

At the same time, the songwriters unpacked personal topics as well: Jett Holden’s “Necromancer,” the title track of his 2021 EP, was about walking away from heartbreak, and knowing how to let a love that’s died stay dead. And Nikki Morgan, after praising the dedicated volunteer crew at XPoNential, delivered the pointed kiss-off “Where The Sun Don’t Shine.” “I’m a second generation preachers kid,” she said, explaining that her parents and grandparents were all preachers. “So I’ve learned very creative ways to say things to people.”

A group singalong to Bryant’s infectious single “Stay Wild” closed the set, a warm showcase of songwriting, community, and strength in numbers. Listen below.