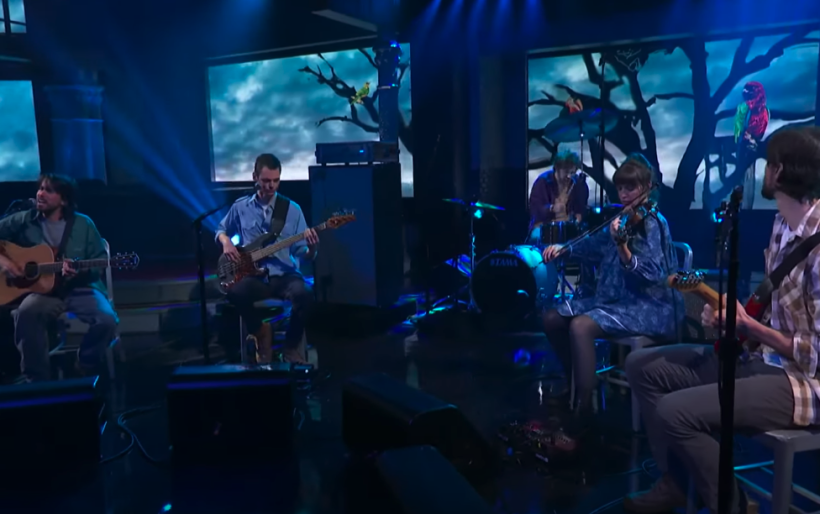 Alex G | still from The Late Show with Stephen Colbert

The five-piece played the mellow and optimistic tune sitting down.

Alex G’s beautiful God Save The Animals has been out in the world now for just over a week. It’s tender, moody, and surprising, and our own Sean Fennell published his thoughts about it here. In what I’m sure is an overwhelming press junket for our hometown hero, Alex G made their Late Show with Stephen Colbert debut with “Miracles.”

“Performing ‘Miracles,’ Alex G,” said Colbert, which is a phrase that, from the perspective of Philadelphia, works on two levels. Many of us remember the Alex G who played damp basement shows in the Temple University area. Without denying his worthiness, it seems miraculous he’s now performing on television. It’s hopeful to see Alex G’s niche brand of unassuming-genius-composer reach a nation-wide audience, and not just be contained to our little city. If you’re having trouble picturing just what a phenomenon Alex G is here in Philly, just skim the dozens of comments below the YouTube video like, “My guy over here doing his thing. Homie deserves this,” and “who would’ve thought we’d ever see this,” but mostly, “I’m so proud of Alex.”

Watch Alex G and his band play “Miracles,” a sunset of a song, on Colbert at the link below. Alex G returns to Philly for three headlining Union Transfer shows in November, the 18th through the 20th; the first two nights are sold out, but tickets and info on the third night can be found at the WXPN Concerts and Events page.