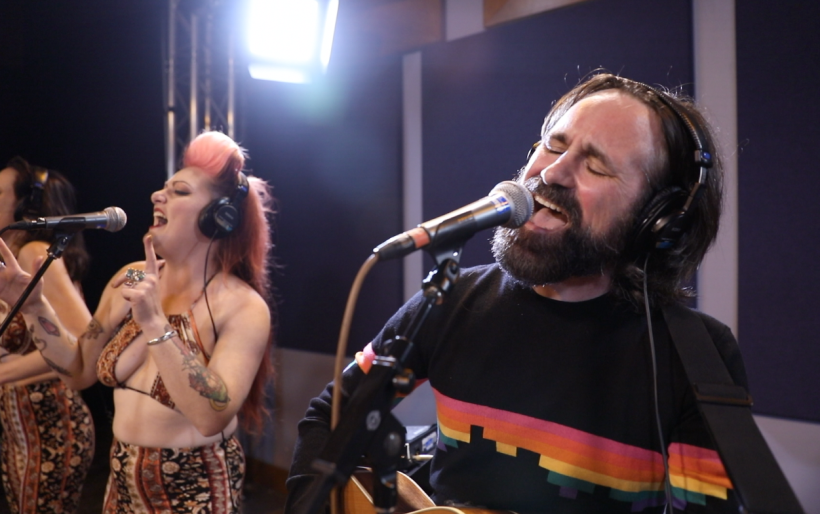 The Philly songwriter previews his Free At Noon performance with a ferocious Key Studio Session.

A poignant lyric stood out as Don McCloskey‘s Key Studio Session neared its peak: “Of all the sacred religions, the only one that ever helped me get by / Is the one that taught me the mantra ‘I IV V in 4/4 time, Faster! Louder! More Divine!'”

It’s a solid in-joke among artists, a music theory 101 nod that captures the spirit of this performance by the veteran Philly singer-songwriter and his bandmates — the frenzy and ferocity of eight musicians on a bevy of instruments, locked in and getting louder and louder still. It’s s a sublime rollercoaster of sound and release. It’s right there in the name of McCloskey’s latest album, The Chaos and The Beauty.

We’ve been loving the album here at WXPN this year; it’s a delightful yet thought-provoking set of songs in the vein of Paul Simon’s Graceland and David Gray’s White Ladder. Throw in some Phish and/or Brian Jonestown Massacre in the mix as well, and you’ve got yourself a recipe for retro-contempo psychedelic excess in the best way. Bringing McCloskey’s songs to life in this performance are bassist Devin Greenwood, guitarist Ross Bellenoit, vocal forces of nature Sarah Biemuller and Hannah Taylor, keys player Adam Flicker, drummer Chuck Staab, and percussionist Shawn Hennessey.

The remarkable band shows off four highlights from The Chaos and The Beauty in this set, from the rollicking “First In Flight” to the explosive slow-burner “Dre” that will leave you wanting more as soon as it’s done. You’re in luck, though: Don McCloskey and his band are at Ardmore Music Hall on October 14th, and before that, they play play this week’s Free at Noon concert on Friday, October 7th at World Cafe Live, so consider this session a way of whetting your appetite for both. RSVP for F@N here, and watch Don McCloskey’s Key Studio Session below.