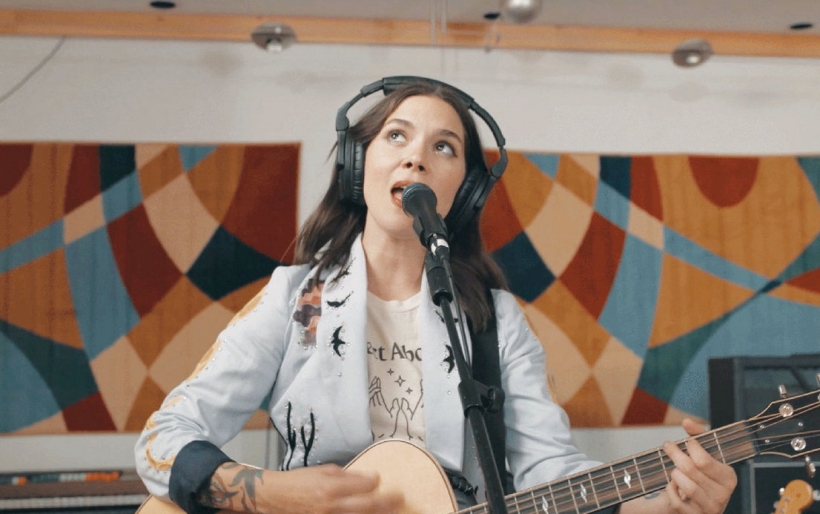 Kayleigh Goldsworthy at Studio 4 | photo courtesy of the artist

As she gets ready to release her own session taped at Will Yip’s Conshohocken studio, the Philly singer-songwriter takes us through her favorite moments from the series.

Though Philly-area producer Will Yip had been taping video sessions out of his Conshohocken home base of Studio 4 for three years, the series took on a new life during the COVID-19 pandemic. When everybody else in lockdown was stuck on lo-frills IG live performances and on-the-fly livestream video, Yip and his crew — which often included collaborators like punk videographer Sunny Singh, aka Hate5Six, as well as filmmaker Britain Weyant — were presenting professionally tracked, mixed, and filmed video sessions with Gladie, The Menzingers, Tigers Jaw, Bouncing Souls and more.

Many Live At Studio 4 performers were artists who Yip has worked with in the past; some were on the roster of his Memory Music label family. For one artist in particular, they’ve had a slow burn to a tremendous record…and a big week this week. Singer-songwriter Kayleigh Goldsworthy‘s Live At Studio 4 EP releases on Friday, and it’s a showcase of music from her sublime 2022 album Learning To Be Happy, which we got to speak with her about back in the spring. It also showed off her full band for the first time — drummer Tucker Rule, guitarist Tom May, bassist Aaron Garritillo, and pianist Justin Bartlett — and tomorrow night they’ll make their onstage / out-of-the-studio live debut at World Cafe Live for Philly Music Fest.

Ahead of the show and the EP release, we asked Goldsworthy to share what she loves about Yip and the series she participated in by picking out her five favorite Live At Studio 4 moments. Read on and watch on, pre-order your copy of Kayleigh Goldsworthy’s Live at Studio 4here, and get tickets to see her at Philly Music Fest with Lady HD, Ron Gallo and more here.

This performance fully encapsulates what I love about the sessions at Studio 4. When you’re watching this, it sounds and looks so good that it’s hard to believe it’s a live performance. It’s just how magical that place and all of the people who put it together are. I’ve been a fan of Bartees since Will told me about him, and I’ve had this song in regular rotation in my house since I first heard it in 2020. (“Boomer” begins at 7:35 of the full session video below.)

I absolutely love how delicate and vulnerable this starts out, Anthony’s voice will forever be one of my favorites. Not to mention… the GROOVE on this one is unreal. Sheesh.

Anthony Green - Follow What You Will (Live at Studio 4)

Kiley is such an incredible singer / songwriter and musician, and I feel so lucky to have entered their orbit since moving to Philly and playing music alongside them on a few shows in Anika Pyle’s band. Kiley’s vocal tone and the rawness of this arrangement absolutely kill me. Such a heart-wrenching song and a beautiful performance.

As a long-time La Dispute fan, I always love any opportunity to see them live. This session was particularly rad for me as an avid listener because it’s great to see the live element with a studio-quality mix.

La Dispute - Footsteps at the Pond

I know it’s a bit extra to pick your own, but after so many years of playing solo and finally being able to see my songs with a full band performance… it makes me so proud of what Will and I did with this record (Learning To Be Happy). I especially love this one live because it starts with me solo before everyone else comes in, sort of a nod to hoping that things continue in that direction. Plus, it was such an honor to gather the group of musicians and friends that I did to play in my band (Tucker Ruule from Thursday/the Future Violents, Tom May from The Menzingers, and Aaron Garritillo from my first band, The Scarlet Ending).