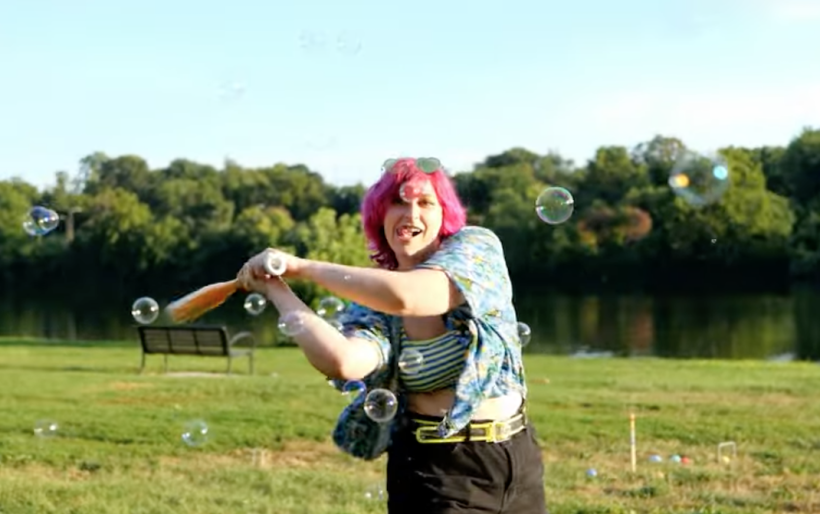 The band is playing Underground Arts this Saturday alongside Mannequin Pussy as a part of Philly Music Fest.

Philly pop-punkers Riverby just dropped a music video for “Birth by Sleep” from Absolution, their album released earlier this year on Take This To Heart Records. In a statement to Brooklyn Vegan, frontperson August Greenberg described the song as being about “how much of a shared experience it is for non-men to find themselves at the center of someone’s fantasies and projection.”

Directed by Andrew Silverman, the accompanying visual toys with expectations by embracing the trope of the “manic pixie dream girl.” The first shot after the title card features Greenberg mugging at the camera in pink hair and orange eyeshadow, as they spit out lines like “I’m not some fucking dreamgirl that needs your goddamn fixing” in their full-throated belt. The rest of the band frolics in the park, taking part in causally surreal activities like blowing bubbles and playing croquet. At a climactic moment, a pinata is torn apart in slo-mo; someone wears a pigeon mask on their head. It’s as playful and cleverly subversive as the song itself.

Check out the video below. Riverby are playing Underground Arts this Saturday, October 16th, alongside Mannequin Pussy, Empath, and justmadnice as a part of Philly Music Fest. Tickets for the show can be found here.