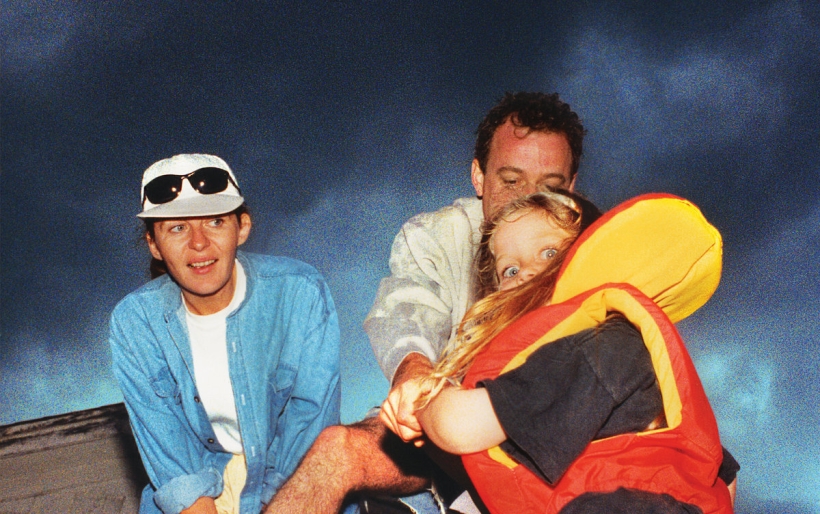 On their third album, the Canadian indie rock group channels — and meets the standard of — a half-century’s worth of musical innovation.

One of the most important drum fills in the history of modern music is also one of the simplest. Four martial thwacks on a snare, and the listener is plunged into a roiling vortex of noise unlike anything that’s been heard before or since. The song is “Only Shallow,” which kicks off My Bloody Valentine’s genre-defining opus Loveless. 30 years and some change later, it takes Alvvays only a few extra seconds to tear an MBV-sized hole in their music, when lead single and opening track “Pharmacist” explodes into fireworks of tremolo bar strums and distortion. From that broken dam pours the torrential deluge of experimentation and meticulous songwriting that is Blue Rev, the band’s third — and best — album.

Alvvays’ first two full-lengths, 2014’s self-titled and 2017’s Antisocialites, were already held close by devoted fans, and produced some of the last decade’s most endearing and enduring indie pop (check out “In Undertow” and “Archie, Marry Me”) even if they didn’t pull a lot of critical weight. Blue Rev is different; it’s an achievement in the undeniable, bowls-you-over sense. Not simply a synthesis of everything that makes this band great, it rolls up over half a century of beloved songs into a svelte 34 minutes, then does them one better. If Blue Rev already existed, there’s no way it wouldn’t be regarded as a masterpiece, so why not skip the wait to give it the praise it deserves?

From a textural standpoint, Blue Rev’s compositions are an accomplished balance of density and detail. On the one-two punch of “Pharmacist” and “Easy On Your Own?”, anthemic choruses are underpinned by woozy synthesizers and fuzzed-out guitars, which create a sea spray of overtones by bending ever so slightly in and out of pitch. Much of the credit goes to Shawn Everett, whose engineering work with The War On Drugs and Kacey Musgraves is remarkable for the way it captures each instrument in crystal-clear resolution. His collaboration with Alvvays, though, represents a new high-water mark for the producer, in how he manages to preserve their capacity to bowl you over with noise at the same time.

That could be thanks to Everett’s unorthodox approach to recording: after an extensive demoing process, he instructed the band to play through Blue Rev in its entirety, with only 15 seconds between each song and thirty minutes between each take. It brings a sense of immediacy to the album, and if it caused any strain, none of the players seem to be sweating it. Guitarist Alec O’Hanley, in particular, is in rare form across the whole tracklist. At points, he churns up squalls of noise à la Kevin Shields; at others, like “Pressed” and “Many Mirrors,” he channels both Lush and the jangle pop stylings of Johnny Marr. There’s a song on here called “Tom Verlaine,” and given O’Hanley’s grasp of interplay and harmonics, a Television comparison wouldn’t be off base.

Of course, the band’s sonic architecture wouldn’t mean much without a bedrock of songs to build on — but oh, what songs they are! Molly Rankin is a songwriter’s songwriter, clearly a student of the Picasso adage to learn the rules like a pro, so that you can break them like an artist. She’s been learning the rules since her days in the Rankin Family, and now Rankin has thrown traditional structure to the wind in favor of songs that move in flawless, innovatively constructed ways. They’re chock full of middle eights, loud-quiet-loud breakdowns, and choruses in flux — both deeply intuitive and consistently surprising. When she crams three hooks into the span of two minutes on “Pressed,” it feels a bit like showing off.

In an interview with the New York Times, Rankin said “sometimes I feel like every song I write is the last one.” It would explain the way that melodies seem to flow out of her effortlessly. One of the most beautiful of these appears on “Velveteen,” showcasing Rankin’s expanded vocal range; she sounds more immense here than ever before. While “Velveteen” takes cues from the Cure and the Psychedelic Furs, “Belinda Says” directly pays homage to another ‘80s icon. Both Belinda Carlile’s solo career and her time fronting the Go-Go’s loom large over Blue Rev, and when Rankin sings “Belinda says that heaven is a place on earth / Well so is hell,” it stands strong alongside the reference.

That turn of phrase — a pivot on a dime from happy to heartbroken — is classic Rankin lyricism. Even though Blue Rev trades in windows-down, sunglasses-on anthems, she still finds room to sneak devastating couplets into the most upbeat songs, not to mention the straight-up weepers of “Tile by Tile” and “Lottery Noises.” “Pomeranian Spinster” is a power pop rager that rhymes the title with “presbyterian minister” and also gestures at some kind of romantic tragedy. It all plays into the collegiate quality that Alvvays’ music seems to intangibly possess, whether that’s naming an album after a vodka-based cola drink or setting a Haruki Murakami short story collection to “The Boys of Summer” on “After the Earthquake.”

“I love melodies that can be sweet, but I do love when there’s some grit — a little bit of emotional weight and pain, just to make it feel complete,” Rankin said in the same NYT interview. On Blue Rev, she achieves this feat over and over again, and it’s a stunning display of virtuosity that never feels too studied or measured. After all, as Rankin sings on “Easy On Your Own?”, “I dropped out / College education’s a dull knife.” For a band called Alvvays, that name has never felt more correct. With their novelistic lyrics, deeply-felt production, and decades’ worth of references, the songs on Blue Rev might as well have been around forever. I’m sure they’ll be sticking around for a while.

Alvvays’ Blue Rev is out now via Polyvinyl Records; listen below and order it on vinyl, CD, or cassette over at Bandcamp.