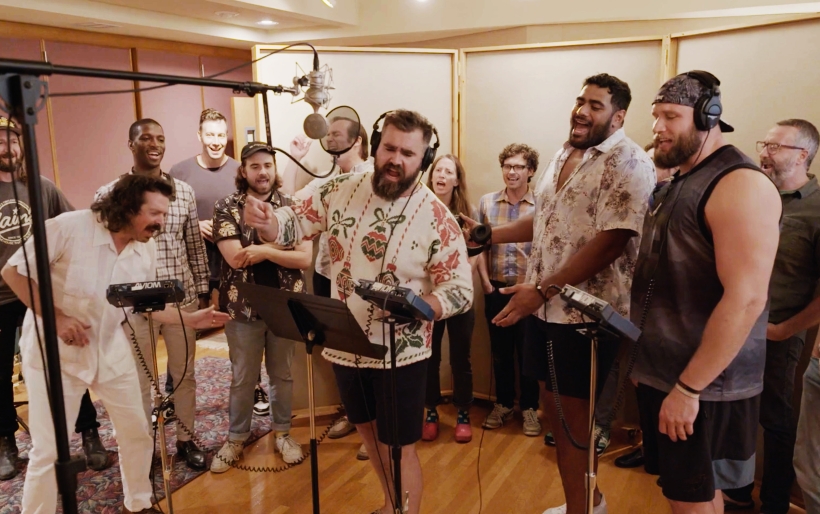 The crew of A Philly Special Christmas | photo by 9.14 Pictures

Enjoying watching the Eagles play an undefeated season? Well, they have another gift for you this season! Players Jason Kelce, Lane Johnson, Jordan Mailata, and Connor Barwin have teamed up with The War On Drugs’ Charlie Hall to produce a Christmas record with seven iconic songs. The full album, A Philly Special Christmas, comes out December 23rd, and all proceeds from sales are donated to the Children’s Crisis Treatment Center in Philadelphia.

“Earlier this year, Jason Kelce got it in his mind to make something special for Philly,” says Hall. “[He] assembled a group of teammates (who can REALLY sing, like REALLY) to make a Christmas record.” Kelce, Johnson, and Mailata sing together in the locker room before games, and wanted to share that side of themselves with the city. With Hall at the helm, the party grew to include more Philadelphia musicians including Lady Alma, Marshall Allen (Sun Ra Arkestra), Rob Hyman (The Hooters), Randy Huth (Pissed Jeans), Zach Miller (Dr. Dog), Brandon Beaver (MeWithoutYou), and many more. Eagles announcer Merrill Reese and players Jalen Hurts, AJ Brown, Brandon Graham, Haason Reddick, and Jordan Davis all make appearances.

“What started out as a fun idea with the intention of raising money for families around the holidays, turned into something much more,” says Kelce. “This project ended up becoming one of the most enjoyable and delightful experiences I’ve ever been a part of… I know it’s cheesy, but this album really came to embody friendship, joy, and giving, as if the Christmas Spirit had possessed us all.”