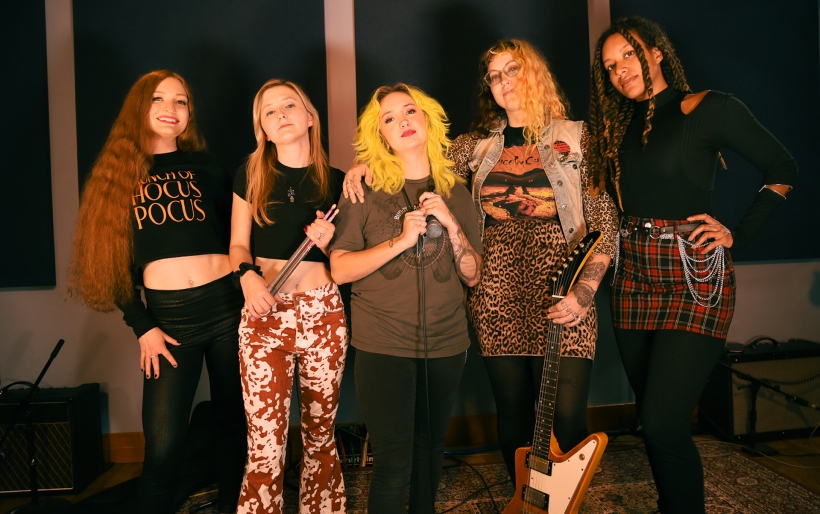 Get a taste of the bare-knuckle energy the Philly rockers are bringing to Johnny Brenda’s this weekend.

They initially touched down on the scene in late 2019, packing out Ortlieb’s for some of the last sweaty ragers we’d get to experience for a while. Two-plus years of pandemic and a couple lineup shifts later, and Philly’s Vixen 77 is right back in the mix with their Pete Donnelly-produced debut record Easy Access, which they just released last week on Megaforce Records and will celebrate on Friday, October 21st with a headlining show at Johnny Brenda’s.

The band was founded by lead guitarist Caitlin D’Agostino, a serious shredder who always wanted to lead an all-femme punk band, as the backstory goes. She found kindred spirits in bassist Jaz and guitarist Liz Cartwright, with asskicking drummer Sarah Novack and charismatic lead vocalist Samantha Joan coming into the mix more recently. Collectively, they channel the blistering hard rock of the 80s, from the gritty garage tones of The Runaways to the arena-aspiring riffage of ZZ Top (whose “Tush” they played a ripping cover of to close the set).

This Key Studio Session hits on Easy Access’ highlights and dynamic range, from the bare-knuckled punk of “Record Store” and “Some Days” to the brooder “Evade” and the anthem “Rock & Roll Royalty.” Check it out below, follow the band on IG at @77vixen7777, listen to Easy Accesshere, and find tickets and information on their Johnny Brenda’s show at the WXPN Concerts and Events page.