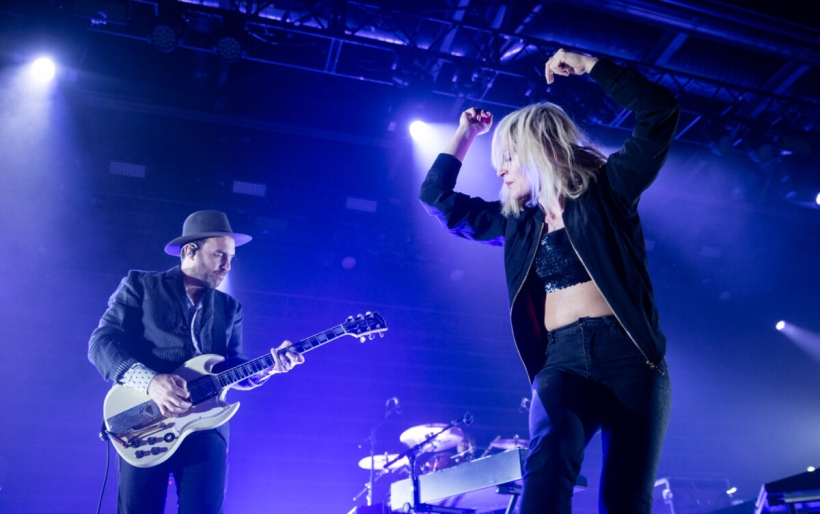 Are you ready to head into the final week of October? We sure are — and we’re bringing you a second round of concert picks later this week focusing specifically on Halloweekend events (the cover shows, the dance parties, all that stuff). But right now, there’s plenty else  to be excited about, from modern rock vets Metric returning to The Fillmore tonight to Philly folk fave Meg Baird at Johnny Brenda’s Saturday. Here are 14 concerts to see in the next seven days, all around Philly; for tickets and more information, consult the WXPN Concerts and Events page.

Canadian indie rock success story Metric make their way down to The Fillmore on Sunday on tour for their new record Formentera. Metric’s stadium-worthy electronic sound is a good match for the cavernous Fillmore; get there early for a place close to the stage. // 8 p.m., $37, AA

Catfite, the hardcore version of Philly ska band Catbite, makes it debut at Ukie Club on Monday. Expect the high-energy songs you love by Catbite, but twisted into raging punk bangers. This fun show is also a great chance to experience the Northern Liberties event hall Ukie Club under the curatorial oversight of local independent promoter 4333 Collective. // 7:30 p.m., $17, AA

Celebrated Philly emo outfit Algernon Cadwallader played its first hometown reunion show last night at a sold out Union Transfer, it was delightfully unhinged, and they’re back for round two tonight. Truly this band has had a strange trajectory; when it parted ways almost a decade ago, it was working its way from basement gigs to “big shows” at The Church; now it’s headlining rooms quadruple that size around the country, and easily selling them out. Their influence in the years they’ve been away has been undeniable — even if folks focus maybe too much on their Cap’N Jazz leanings and not enough on their Pavement leanings — and you don’t want to miss out on their second night at UT, especially with the solid roster of Philly openers that is Eight, Lizdelise, and Big Nothing. // 6 p.m., $25, AA

Freewheeling New York City-based saxophonist and improvisor Zoh Amba stops in Philly this week for a show at Solar Myth — the South Broad Street venue that used to go by the name Boot & Saddle. Now a home base for Philly experimental tastemakers Ars Nova Workshop and their musical adventures at the intersections of jazz, punk, and instrumental soundscaping, Amba is an ideal candidate to inaugurate the new/old space. She’s got formidable chops under the free jazz umbrella and a resume that this year alone has seen her release albums in collaboration with double bassist William Parker (O Life, O Light Vol. 1), Philly-rooted metal-adjacent guitarist Matt Hollenberg (Bhakti), and revered multi-instrumentalist John Zorn (O, Sun). For Tuesday’s show, which ANW expects to sell out in advance, Amba will be joined by Irreversible Entanglements bassist Luke Stewart and Gang Gang Dance percussionist Ryan Sawyer. // 8 p.m., $20, 21+

Tegan & Sara have had a big year. The twin sisters and decades-long musical partners just put out their new confessional and reflective record Crybaby, and are rolling out episodes of their original TV show High School based on their own life story. They’ll be at Union Transfer on Wednesday to play the second of many shows on this tour cycle. // 7:00 p.m., $45, AA

Bela Fleck and Abigail Washburn are THE authorities on banjo in the 21st century. The couple, who first bonded over mutual admiration of each other’s playing, exhibit a deep appreciation of the banjo for its roots in the American south and further back to the Caribbean and West Africa. Listen to Fleck’s 2021 album My Bluegrass Heart and Fleck & Washburn’s 2014 self-titled record in preparation for the show, not to mention the second regional performance on Sunday, October 30th at the Zellerbach Theatre. // 7:30 p.m., $49 and up, AA

After opening for pop sensation Harry Styles this summer, folksy singer-songwriter Madi Diaz comes to Johnny Brenda’s on her own headlining tour. Fans of Phoebe Bridgers and heart-aching lyrical songwriting in general will revel in her music. For an easy introduction, check out the EP Same History, New Feelings she released this year featuring Waxahatchee, Courtney Marie Andrews, and Angel Olsen. // 8 p.m., $18, 21+

In a recap of their Free at Noon concert earlier this year, XPN’s John Vettese described this Doylestown-based outfit as “one of the most compelling live bands in modern rock.” Fresh off their run of dates opening for the Black Keys, Ceramic Animal is ready to deliver on that promise, bringing their retro genre-blended sound to Underground Arts. After all, if The National has taught us anything, it’s that you can’t go wrong with a band of brothers. // 9 p.m., $20, 21+

With an aesthetic steeped in grizzled Americana, punk rock, and Criterion DVDs about existential dread, Philly’s Dan Bruskewicz cultivated a strong and evocative aesthetic in the twenty-teens via his band TJ Kong and the Atomic Bomb, culminating each year in a “Murdershow” celebration ahead of Halloween. This year the Murdershow returns in a new home at Johnny Brenda’s, and now features Bruskewicz’s new outfit Dan the Movie, a COVID project that became a new full-time pursuit. They’ve got a new single on the way, and they’ll share the stage on Thursday with York Street Hustle, as well as veteran Philly vocalist Ali Wadsworth, who’s back home from the left coast for a Guns N Roses covers set. // 8 p.m., $15, 21+

It’s hard to think of a better venue than local gallery and art collective Space 1026 to play host to Saintseneca’s nostalgic brand of indie folk. The Columbus, OH band just put out a new single — the spooky season-channeling ”Wild Violent” — and concertgoers can expect an intimate crowd to collectively revel in the joys and pains of Zac Little’s endlessly referential songwriting. // 7:30 p.m., $23, 18+

Venture out to Lancaster if you’re ready to rock with Welshly Arms’ emotional bangers. Those unfamiliar with the band can imagine something between the Lumineers and Imagine Dragons, but frontman Sam Getz has described their new album, Wasted Words & Bad Decisions, as a return “ to the raw rock-n-roll that we had built the band on when we were jamming in the basement together.” // 8 p.m., $20, 21+

If there’s one month out of the year that ghoulish Philly indie rockers Sixteen Jackies make more sense than the rest of the calendar year, it’s the month of October. The band, which fuses retro 60s rock with a horror B-movie camp aesthetic, will headline night one of Losers Fest at Ortlieb’s on Friday. The event, celebrating local indie imprint Born Losers Records, also features Surf Rock Is Dead and Stray Fossa, with the Suburban Living DJs keeping the energy high between sets. // 8 p.m., $12, 21+

Philly-rooted singer-songwriter Meg Baird has spent a decades-long career musically spanning the beautiful, the tragic, the haunting and mysterious though plaintive songs indebted to the UK folk of the 60s and 70s. Her new album, Furling, is out this fall on Drag City Records, and she returns to her Fishtown stomping grounds this Saturday for a show with her old neighbor Chris Forsyth at Johnny Brenda’s. // 7 p.m., $15, 21+