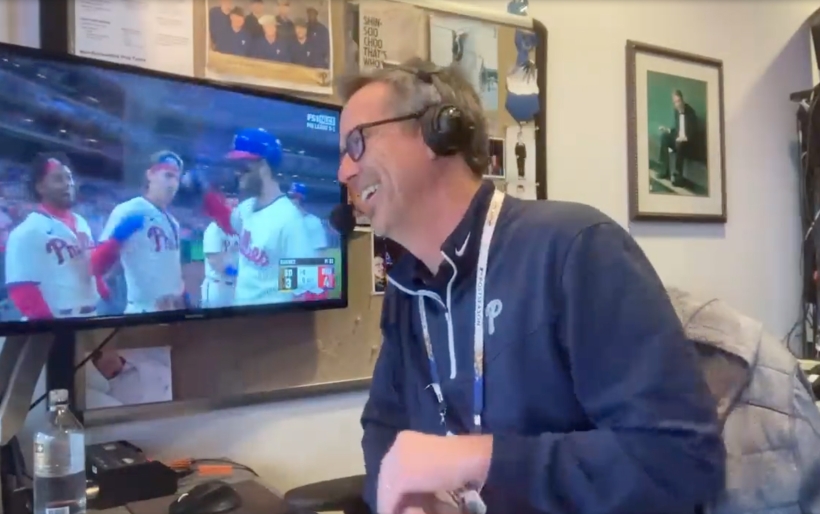 The Phillies play-by-play announcer shares the excitement around calling Phillies games, Bryce Harper getting hot, the fans, and the franchise’s future with WXPN host Dan Reed.

For MLB fans, the voice of their home team’s play-by-play announcer often becomes a part of their longtime memories, just as much as the players and big plays themselves. Harry Kalas’ 2006 “Chase Utley you are the man,” Mike Schmidt’s 500th homerun in 1987, and Joe Buck’s “Stairs rips one into the right” during the 2008 pennant race, to name a few, will live on forever in the ears and memories of Phillies fans.

Perhaps the next call to go down in Philadelphia sports history is Scott Franzkie’s “bedlam at the bank” call during Bryce Harpers 2 run homerun on Sunday’s radio broadcast. The 382 ft bomb gave the Phillies the lead and ultimate win over the Padres in game 5 of the NLCS – clinching their spot in the 2022 World Series.

Like many others in recent history, this call came from Scott Franzke on the Phillies’ Radio Network, 94 WIP in Philadelphia. To celebrate the Phillies’ trip to the 2023 World Series, WXPN Afternoon host Dan Reed invited Franzke onto his show to discuss his excitement around calling the games this year, Bryce Harper getting hot, the fans, and the franchise’s future. Hear the complete segment in the audio player above.