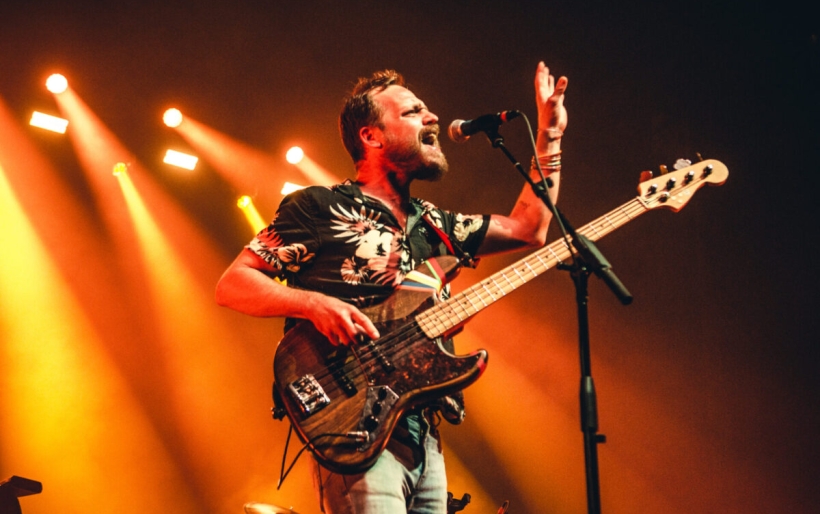 A surprise six-song EP dropped on Friday, recorded in collaboration with Leaman’s bandmate Eric Slick and an array of scene friends.

In this strange world of not-broken-up, no-longer-actively-touring, it’s been murky what the next new thing would be out of the Dr. Dog camp. A studio album? A solo project? And if it’s the latter, who would go solo first?

Turns out that, following up on this fall’s run of live releases from the archives, solo is the next move, and bassist Toby Leaman is the one making it. Though his bandmates in Dr. Dog have a long history of releasing their own projects — his songwriting partner Scott McMicken released the great Scottman LP in 2016, and reportedly has something new on the way, while drummer Eric Slick has a vast discography, most recently including 2020’s Wiseacre — Leaman has yet to go it alone, despite taking the lead some of Dr. Dog’s most impactful songs (“Bring My Baby Back,” “Broken Heart,” “Stranger,” “The Beach”).

That changed Friday with the surprise drop of Military Applications, technically released under the name dd Toby Leaman over on Bandcamp. It was recorded at three studios and studio-esque spaces — Montross Studio in Richmond, Slippery Slopes in Wilmington, and the band’s Mount Slippery studio in Clifton Heights — and features an array of friends-and-fam collaborators. Longtime friend Eliza Hardy-Jones sings backup vocals, as does Leaman’s father Mel, while live band karaoke leader and viral content creator Pat Finnerty plays lead guitar on a couple tunes; Slick drums on the entire project.

At the center, of course, is Leaman himself, and these six songs show his eclectic array of sonic leanings, from rootsy soul to heady dub, his ever-gruff vocal cutting through the mix with warm and uplifting melodies. The opening
“Spooked By The Kooks” gets the set off to a strong start with a reggae-toned organ verse that explodes into a punchy rock and roll chorus; lyrically, like Leaman’s best moments, it straddles feelings of deep despair and signs of hope in the distance.  The title track has a driving new wave feel, the drum loopy bop “Rider” struts in an atmosphere equally indebted to William Onyeabor and Lipps Inc., and again, speaks to that desire to find an optimal headspace when the world makes it so very hard: “only the lonely get lonely so I try my best to stay out of my mind.”

At its most far-out, Military Applications finds Leaman trying on aesthetics that might not have necessarily been expected from him in the context of his full band — the hazy midtempo tropical sounds of “Don’t Worry” seems to be him working in an aesthetic that McMicken would often claim for himself. And taken as a whole, the project shows the songwriting strength Leaman brought to Dr. Dog; every one of these six songs has an impeccable pop hook, and despite the wide-reaching aesthetic range, it all holds together, all the way to the closing exuberance of “The Runaway,” a song that recalls The Clash’s “Train In Vain” as much as any of his own catalog of hits.

Listen to Military Applications below; Leaman’s next two regional gigs find him opening for Alex G’s sold out November 19th show at Union Transfer, as well as opening for Cosmic Guilt’s headlining set at Arden Gild Hall on December 17th. More information can be WXPN’s Concerts and Events page.