Hit 'Em With The B-side: A conversation with DJ Aktive - WXPN 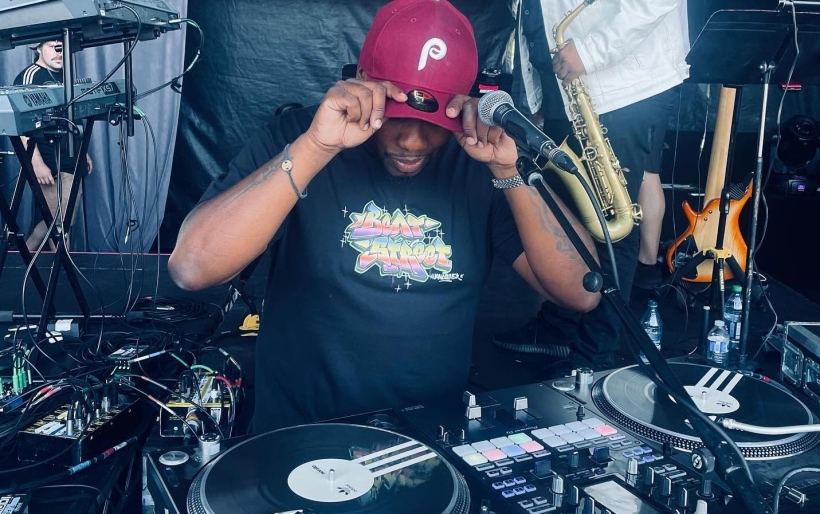 Hit ‘Em With The B-side: A conversation with DJ Aktive

A conversation with the veteran Philly DJ ahead of his World Cafe Live party Sunday.

Throughout his career, DJ Aktive has been actively proving that some of the best DJs come from Philly. Like the hometown legends before him, DJ Jazzy Jeff and Cash Money, DJ Aktive’s top-tier skills in scratching and mixing along with having a great ear for music has allowed him lend his talent to tours for legends such as MusiqSoulchild (the first artist he worked with), Diddy (whose Bad Boy Reunion Tour is still his favorite tour he’s been a part of), as well as Nas, Common, Kanye West, Queen Latifah, and currently Janet Jackson.

You can even see his activity on national television thanks to connection from his good friend Adam Blackstone, who got him the opportunity to spin for Jimmy Fallon’s celebrity karaoke show That’s My Jam. Yet with all the moves he’s been able to make, whenever given the chance Aktive loves to go back to his hometown and collaborate with the local artists. A perfect example would be on his album The Tour that featured local Philly artists like Chill Moody, Evita Colon, and Khemist.

Presently DJ Aktive is getting ready ready to spin at his Halloween event Protect Ya Neck at World Cafe Live this Sunday alongside hip hop legends Slick Rick and Young Guru. Leading up to the show, I was able to talk to him about a variety of topics such as how his cousins DJ Ghetto and Kid Swift influenced him, linking up with Musiq Soulchild Child and Janet Jackson, his current favorite local artist and what he loves most about today’s DJs from his city.

Rahman Wortman: Let’s take it back to the beginning and give a shout out to DJ Ghetto and Kid Swift.

DJ Aktive: They my cousins, shout out to those two! I came underneath them, that’s where it started, I learned from Ghetto. He put me in the game with BMC, the battle world. What I learned from them was the showmanship in DJing. When he battling he would be creative and pointing at the opponent, interacting with the crowd, and I took those things I saw from him. I was twelve at the time and he was sixteen and I saw that and knew I had to add them into my sets instead of just standing there and just mixing.

RW: Who was the classmate that gave you the name DJ Aktive?

DJ Aktive: I think her name was Christy! We in 8th grade in class and we were in class and everyone started to call me that because I was always moving around and fidgeting a lot. They were like “You DJing now so we going to call you DJ Active because you so active and running around.” It stuck so they did a poster of me once I was done with school. She made a poster of me and everybody signed it so I was like I’m just going to run with this.

RW: Your come-up started in the early 2000’s working the nightlife circuit. I was told by HBK and AMH that the Philly DJ community is more friendly and less cutthroat and competitive than it was in the past. How do you compare the community from twenty years ago to now?

DJ Aktive: You know what? For me, I came in 2003 and 2004 and it wasn’t competitive. You had older cats like DJ Storm, Baby DST, and others, but I was never in competition with them. We had our own little group called the Skratchmakanics: me, JaySki, Excel, Sat-one, DJBee, Question, and Rome, we all use to share each other’s gigs to keep us on. If I can’t do a gig I’m going to pass it to Ex, or whoever, we kept it in the circle. Also for me I was on the road, I started with J-Ervin in 99 and got on tour with Musiq Soulchild in 2000. I was even spinning in the clubs until 2003 man. I had my little Wednesday night I did at this spot called Red Sky and one spot called Glam and I was chillin’, man.

RW: You mentioned touring with Musiq Soulchild and I read that your first show with a music artist was with him at a Courvoisier event in NYC in 2000? You were dropping different breakbeats and hip-hop tracks to have him sing over. What was your favorite song from that performance?

DJ Aktive: Absolutely, it was the “When the L is Gone.” We introduced it by playing “Top Billin,” and had him freestyling to it. I remember we also did one later on to Joe Budden’s “Pump It Up.” It’s basically what I do with Janet, remixing her old school music over newer hip hop beats.

RW: You were also on the first track of the Soulstar album. What was it about Musiq that you liked working with him?

DJ Aktive: Oh man I would say his hungriness, because Musiq came from the bottom, man. That guy was homeless at one time, so to see where he’s at now is dope. He was a hip-hop head too, so that made me want to work with him. We also had the same managers, Michael McArthur and Jerome Hipps were the ones who found Musiq and got him a record deal. They found me in southwest and put the two of us together. I didn’t understand what I was going to be doing with an R&B artist because I was strictly into just hip-hop. Once me and him connected we gelled, man. We also put out a project outside of his label Def Soul called Gritty in 2005 where I had him singing over a bunch of hip hop beats like Eric B and Rakim and a bunch of J Dilla beats.

RW: You’re currently touring with Janet Jackson, but in the beginning you were aware of her hits but wasn’t that familiar of the B-sides. You started to learn more of her discography as well as the house records to play to the crowd. What some of your favorite discoveries from Janet Jackson’s catalog that you personally like or enjoy playing for the crowd?

DJ Aktive: Sheesh, let me see! “Call Me Your Lover,” is a good joint. “Night” off her Unbreakable album. So many house remixes that I can’t think of off the top of my head. She has so much music out that it’s mind-blowing bro. I had to really know it because all I knew were her hit records, knowing she had so much more. The crowd wanted to hear her B-side records and she would tell me to don’t do any of the songs that are going to be performed, only the B-sides. The crowd will know them word for word, she legit has a cult following.

RW: You and your partner Adam Blackstone have been making some noise on television, working on the Pepsi Super Bowl Commercial by adding mixing and scratches to Mary J Blige’s part and Dr Dre and That’s My Jam Hosted by Jimmy Fallon. How did the two of you link together?

DJ Aktive: You know what? I’m going to give that one to Adam. Adam actually made that marriage happen, he had the relationship with the people over at NBC. He gave me a call and asked for me to do it. Much respect for Adam for bringing me involved with the TV stuff.

RW: You have a label called Aktive Music and dropped an album called The Tour that featured local artists such as Chill Moody, Khemist, and Evita Colon. Seeing how you’re working on signing and developing new and upcoming artists and that you have your ear to the local scene are there any current local artists in the Philadelphia region that you would like to work with?

DJ Aktive: You know what? I love new talent, especially from Philly. If can put you on a platform and help, then I would love too. I do this thing called Chill Vibes about two or three times a month and I had my home girl Frenchie rock on there. I had Chill Moody, Black Papi, Khemist, and Young Chris on my album, just a lot of dudes that I’m cool with who I know are talented. I always try to keep the hometown involved and keep it Philly first before asking a big name like Common or Estelle to get on the track you know what I mean?!

RW: Are there any local artists that you like currently?

DJ Aktive: You know I like Beano, that’s my man right there! He’s definitely a problem. And I like Frenchie too!

RW: You got an event coming up this weekend called Protect Ya Neck at World Café Live with Young Guru and Slick Rick The Ruler. You also have attended and have been a part of a lot of events created by local DJs in the city. From seeing how they’re doing their thing, is there something that you noticed them doing that DJs didn’t do when you were coming up that makes you proud?

DJ Aktive: Shout out HBK, AMH, Caution, and some of the other youngins. I love what they’re doing by throwing their own parties. Back in 2009 and 2010, some DJs weren’t doing that, you know what I am saying? Even though he’s a promoter, shout out to my man Nas, but it’s not just about him, it’s about the DJs HBK and AMH. So salute to those brothers man, they putting on for their city, especially on the R&B tip. That U+Me+RNB jawn is fire! Bobby Flowers is killing it! Nash, Selekta, Killsing, I’m loving what she’s doing. That’s my girl right there! Rebel is my youngin, he done came to the crib to practice a couple times. I love his ear for music, love for hip hop. Salute to Rebel man, he’s next! He’s the next one in my opinion.

Protect Ya Neck with DJ Aktive and Friends comes to World Cafe Live on December 30th; tickets and more information can be found at WXPN’s Concerts and Events page.