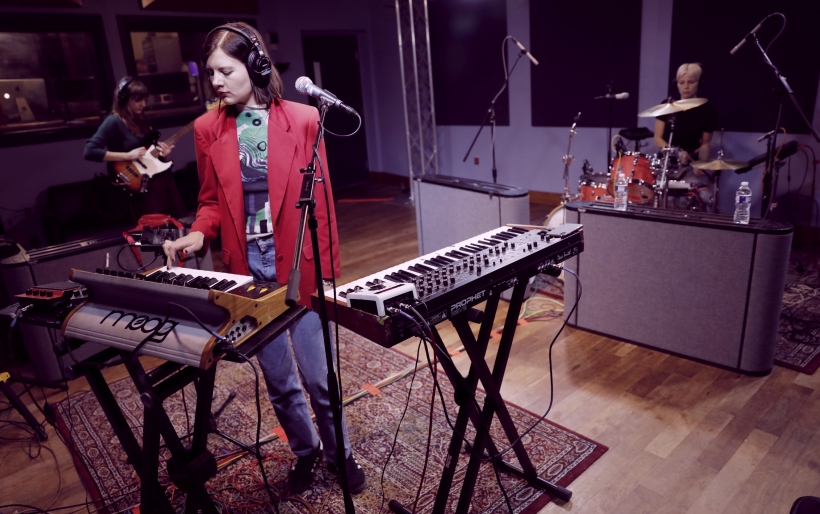 The Los Angeles trio showcases songs from their new album, Excess, live in our studio.

Joining us in the studio for this Indie Rock Hit Parade live session is a group whose visit perfectly coincides with the spookiest time of the year. Formed just five years ago, the LA trio Automatic offer a modern take on dark, mechanical new wave. Taking their name from one of the Go-Go’s most sinister album tracks, keyboardist Izzy Glaudini, bassist Halle Saxon, and drummer Lola Dompé released their debut album, Signal, in 2019. Propulsive rhythms and ominous synths made the album a quick favorite on IRHP playlists; it also garnered the attention of folks like Sudan Archives and Osees leader John Dwyer, who contributed remixes to a companion EP released last year.

Automatic returned this summer with their second full-length, Excess. Like the chrome-plated bodice on its cover, the album has a technological sheen. Offsetting the precise, otherworldly arrangements are Glaudini’s vocals; the intro to “New Beginning” is wistful and intimate, while the call-and-response with Dompé on “Skyscraper” and “Venus Hour” is playful. The band performed these songs, along with new single “Teen Beat” live in our studio.

Have a listen to Automatic’s Indie Rock Hit Parade session below. Check out photos from the studio by John Vettese and watch the video for “Teen Beat,” too.