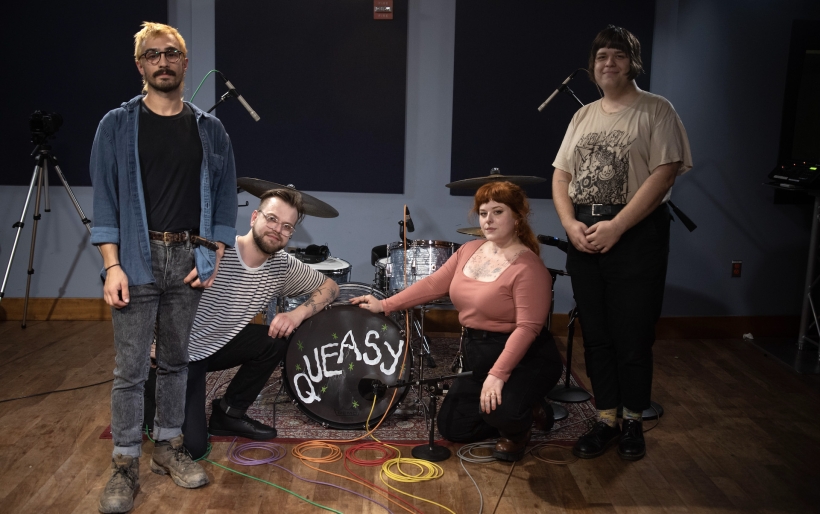 Before they wrap up 2022 with a run of gigs around the east coast, the Philly indie four-piece showcased their terrific album ‘Shining Now’ and debuted a new song in WXPN Studios.

As we approach AOTY season, Queasy‘s debut album Shining Now is not exactly on the lips of a lot of curators and tastemakers — but it absolutely should be.

A wholly independent release that hit streaming services this summer, it is hands-down one of the best things I heard 2022: an electrifying amalgam showcasing not only the Philly four-pieces’s wide-reaching and impeccable taste, but their ability to make a spectrum of genres from shoegaze to screamo to shimmering alt-pop co-mingle seamlessly.

Comprised of bassist and singer Corinne Dodenhoff, guitarist-vocalists Maddog Davis and Stevie Dodge, and drummer Pavlo Demkiv, the band founded in 2018, released some demos ahead of lockdown, and returned in a big way this spring with “Nice.” It’s a soaring Yo La Tengo-esque anthem about the cosmic absurdity of making friendly small-talk when we’re bombarded with news about war and death, natural disaster, folks having their rights stripped away and whatever else: “the whole world’s fucking burning, but when you ask me how I’ve been I’ll say ‘just fine.'”

As I gushed to Dodenhoff this summer, I would have been stoked if Shining Now had been a full album of “Nice”-s, but the variety it boasts is remarkable: dreampop moments in the vein of Slowdive and The Sundays, noisey and mathy stretches indebted to Sonic Youth, searing bits of post-emo catharsis out of the Thursday school. We get a snapshot of the album’s cohesive variety in this performance at WXPN Studios, beginning with a brand new song they’re debuting here.

The waltzing indie pop of the new “Wayside” finds Dodenhoff taking lead and shifting the perspective from the global to the personal, describing moments of connection that were once fulfilling but have frustratingly imbalanced and disconnected. As the set continues, it’s a showcase of Shining, from the interlocked guitars of Davis’ riveting “Spherical” to the deadpan melodies of Dodge’s pensive “Stained Glass” — two songs that abstractly look at questions of faith and existence — closing on another Dodenhoff number, the emotive “Funny Feeling.”

Watch Queasy’s Key Studio Session below, and catch them as they wrap up 2022 with a run of gigs in Philly and beyond — they’ll be at a series of concerts at South Philly DIY spot The Pharmacy on November 2nd, November 18th, and November 26th, with an election night gig at World Cafe Live on November 8th, an Ortlieb’s gig on December 2nd, and a show at NYC’s Bar Freda closing out their year of shows on December 10th. For more on all, follow the band’s IG at @queasy.does.it, and check out Shining Nowat their Bandcamp page.