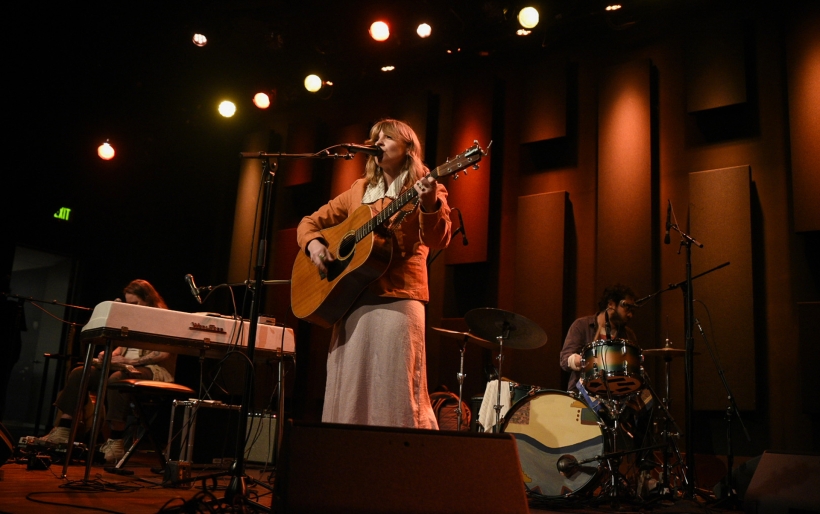 Backed by a band with Philly roots, the Arizonan singer wasn’t much for small talk, but her songs were downright enchanting.

Courtney Marie Andrews isn’t shy per se, but there was something reserved about her presence on the Free at Noon stage today. Maybe it was her bangs, which swooped to nearly obscure her eyes. It could’ve been the lack of audience banter, even when Andrews paused to tune her guitar. Of course, those impressions were done away with the moment she launched into her set, featuring songs from her new record Loose Future.

Andrews’ voice is remarkable for its piercing clarity. At times, she sounds kind of like Celine Dion, if Dion had traded French Canada for Phoenix, AZ, pop ballads for folk country, and bombast for a gentler kind of splendor. Andrews tells stories of the things we don’t say that get in the way of love. To put it another way, “Who am I kidding? We’re halfway there, / But I’ll keep pretending that I don’t care,” she intoned on the set opener, which doubled as Loose Future’s title track.

The singer-songwriter did pause twice to address the crowd. The one time, she dedicated “Burlap String” to her “dear friends Amy and Derek [Ross],” Arizona musicians from the band Nowhere Man and a Whiskey Girl who inspired Andrews to take up the touring life, and passed away seven years ago. The other was to introduce her own band: “It’s great to be here Philly. We love Philly, we’ve got two Philly members in this band.”

Guitarist Jerry Bernhardt (sporting a Phillies raincoat) and drummer Dom Billett were the Philly musicians in question, and both played their instruments to resonate with the emotional timbres of these songs. On “Change My Mind,” Andrews lamented how “Something deep inside me won’t believe you / Even when you tell me I’m enough,” and Bernhardt’s guitar wept along with her. Billett’s bossa nova groove on “These Are The Good Old Days” sounded like a ticking clock, perfectly matched to a chorus refrain of “Don’t let time slip away.”

Almost a plot twist — the show really began to dazzle when Bernhardt migrated to the keyboard. The band kicked up a twinkle of electric piano, pedal steel, and bells that wavered like a starry night over the grasslands. Out of this haze emerged “Break The Spell,” one of those three-chords-and-the-truth numbers that holds sway with simplicity. The band constructed their angelic three-part harmonies like an old school Crosby, Stills, and Nash record, forging a bubble of suspended time where Andrews could hover above the ground for a few minutes.

Courtney Marie Andrews’ music is totally lacking in hesitation; these songs feel comfortable and lived-in, never tried on for a lark. Their range of tempos and chords is limited, but their capacity to grab your attention and hold it is unrivaled. Andrews isn’t fashionable or unfashionable, and she won’t be going out of style any time soon.

Listen to a recording of the show below. Courtney Marie Andrews and her band will be playing 118 North in Wayne this Sunday, November 13th; more information can be found at WXPN’s Concerts and Events page.