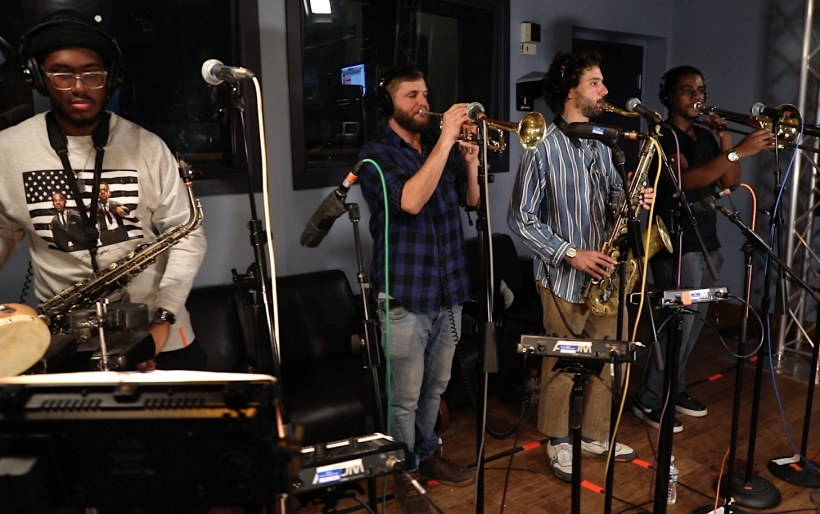 Philly’s premiere brass band plays a live set for Public Radio Music Day and talks about their journey from pandemic pop-ups to the TLA stage.

Philly’s SNACKTIME has been on a journey these past two years and change. The array of immensely talented brass musicians from the Philly scene — sax player and vocalist Yesseh Furaha-Ali, sousaphonist Sam Gellerstein, trombone player Michael Spearman, trumpet player Eric Sherman, and tenor saxophonist Ben Stocker — joined forces with a propulsive funk rhythm section — Austin Richard Marlow on drums and Larry Monroe Jr. on guitar — during the COVID-19 lockdown of 2020 to 2021. Live music was not yet able to happen in the traditional sense, so they found a way to make it happen, playing pop-up concerts in every imaginable nook and cranny of the city…and they became beloved across Philly because of it.

In the beginning, SNACKTIME’s repertoire was largely covers of 70s soul and 90s hip-hop favorites, from Stevie Wonder to Ginuwine. But as they played more, they began composing powerhouse originals and getting them in the mix, coalescing into their debut album, SOUNDS FROM THE STREET, recorded live over a weekend at Germantown studio Rittenhouse Soundworks.

Joining us live for a Public Radio Music Day livestream concert on October 26th, SNACKTIME reflected on that journey in an interview and blew us away with live performances: the brand new ripper “I Don’t Give A Damn,” an anthem for creative folks about keeping your eyes on the prize and focused on your goals and not letting external stressors weigh you down, as well as “Tipbucket Luvr,” a feel-good love song as Furaha-Ali puts it. In between we hear a Beatles cover they worked up on the fly, and we find out more about their biggest hometown show to date, headlining South Street’s famed Theater of Living Arts this Friday, November 18th. Tickets and more information on that show can be found at WXPN’s Concerts and Events page; listen to SNACKTIME’s full interview and studio session above and watch videos of the performance below.