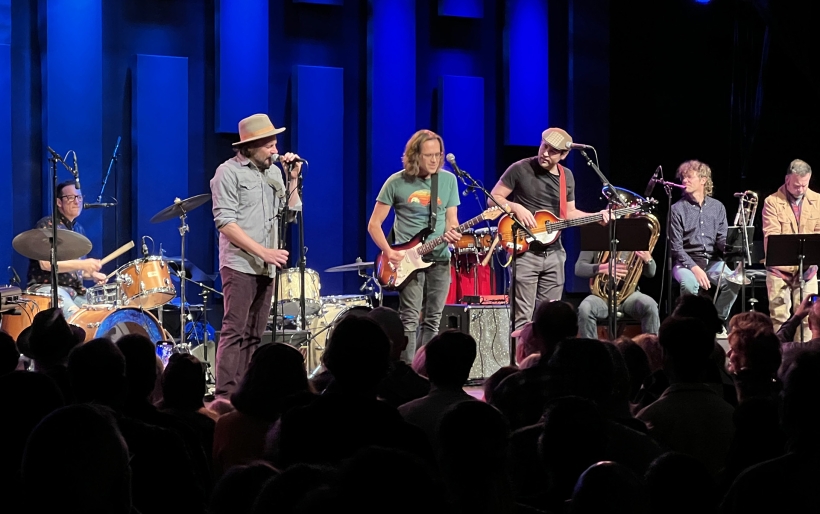 The Last Waltz Philly | photo by Bruce Warren for WXPN

As midday host Mike Vasilikos put it, this eight-song set was the appetizer before the main course Saturday night.

46 years ago today, The Band played their final concert at San Fransisco’s Winterland Ballroom, filmed by Martin Scorcese for their legendary swan song documentary The Last Waltz. Before a massive cast of Philadelphia musicians congregates at Franklin Music Hall on Saturday night to perform the iconic live album in its entirety, they took the stage at World Cafe Live for a post-Thanksgiving Free at Noon, playing some of the album’s highlights.

The expansive ensemble was led by singer-songwriter Andrew Lipke, who took lead on the opening “Don’t Do It” as well as “It Makes No Difference.” Joining him were Adam Flicker on keys, Nate Graham on piano, Andrew Napoli on bass, and dual drummers Freddie Berman drums and Matty Muir, as well as the horn section of trumpet player Matt Cappy, saxophonist Jay Davidson, and tuba player Sean McCusker.

In addition to the core band, some of the big show’s guests joined in: Chris Kasper absolutely nailed the lead vocal of “Up On Cripple Creek” and Muir did a fine job with “Ophelia,” Mutlu got the crowd singing along to “The Weight,” Casey Parker went all in on “Caravan,” and Tanqueray Hayward stole the show with a dynamic “Further On Up The Road,” which featured Hooters drummer David Uosikkinen taking over behind the kit. The set wrapped with Cowmuddy doing “The Night They Drove Old Dixie Down.”

XPN midday host Mike Vasilikos called it an appetizer for the main course tomorrow night — eight songs of a planned 25 that will be performed at the Franklin Music Hall show — and Lipke spoke of the show’s two-pronged celebration of community, both by raising funds for the Make The World Better Foundation (which rehabilitates city parks and creates safe spaces for Philly youth) and celebrating the life of concert promoter Bryan Dilworth (who passed in 2020 and, as Lipke said, knew better than anyone the healing power of music).

Listen back to the performance below and get tickets to The Last Waltz Philly here.