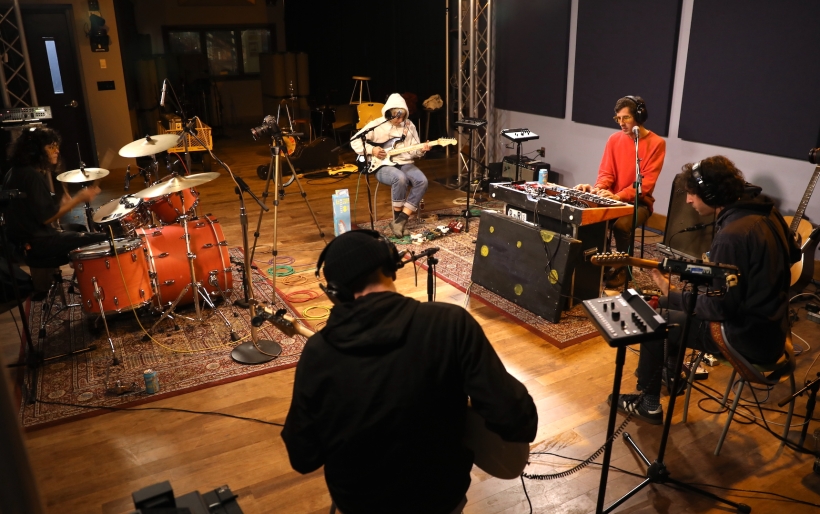 DIY scene singer-songwriter Russell Edling has been honing his aesthetic in several projects over the past decade: first through the punkish fuzz-rock band Kite Party, then in the blissed-out pysch-pop group Cherry. The latest iteration of his creative vision is Golden Apples, a textured and heady group that explores deep memory, trauma, growth and connection through songs that can be contemplative burners, snappy pop numbers, and rock-out ragers alike.

Along with primary collaborators Mimi Gallagher on vocals and lead guitar and Matt Scheuermann on vocals and bass, Edling builds out Golden Apples with a roster of musical peers and friends on their self-titled sophomore album, released this past April on Lame-O Records. For this Key Studio Sessions performance, guitarist Kian Sorouri and drummer Melissa Brain round out the live band, and collectively Golden Apples delivers a terrific showcase of the new album with the hooky “Grass,” the trippy “Cosmic Candybar,” and the explosive “High School”; a pensive performance of “Jock” from their 2020 debut album Shadowland opens the session, and you can watch the full set below.

Golden Apples performs live at the First Unitarian Church in Philly this Friday, December 2nd, for the Lame-O Turns Ten festival; tickets and more information on the show can be found at WXPN’s Concerts and Events page.