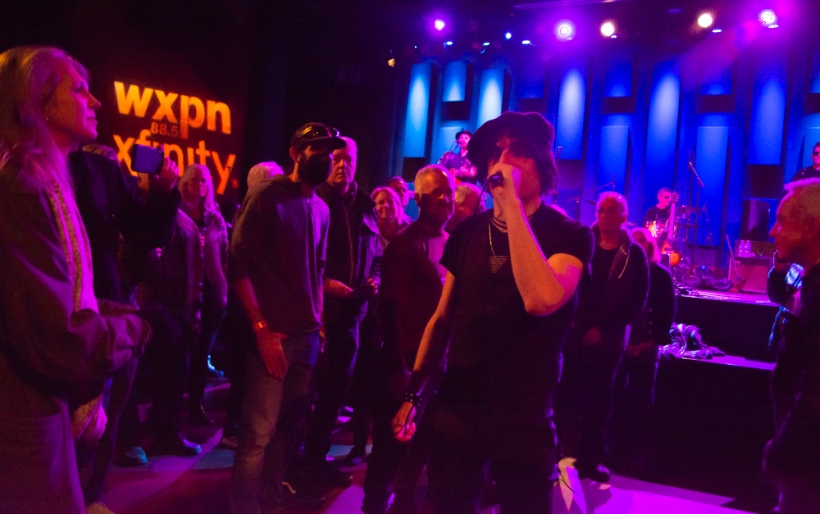 Jesse Malin gives Free at Noon a reason to believe

It’s right there in the name—Free at Noon—but that didn’t stop Jesse Malin from greeting today’s crowd with an enthusiastic “Good morning Philadelphia! It’s good to be alive.” His address was par for the course, though; the New York City scene veteran is a self-professed late riser. Dressed like some sort of wayward minstrel, Malin fully embraced the character of the rockstar desperado, with retrofitted bar rock anthems engineered to match.

Malin captivated with a sort of manic intensity. His voice had traces of James Taylor and Bob Seger’s speak-singing, with a Dylanesque curl to it but no one-to-one analogue. On the Spoon-indebted stomper “The Way We Used To Roll,” he sang “I was charged with a crime / I was misunderstood,” leaning down and pleading as though the audience was judge, jury, and executioner. When Malin called out song names, he wasn’t just announcing them to the audience; he was cueing the band through the set’s hairpin turns.

That band—Derek Cruz on guitar, James Cruz on bass, Paul Garisto on drums, and Rob Cloris on keys—were the calm, cool, and collected counterpart (two even wore sunglasses) to Malin’s letting it all hang out. And they laid down every pastiche in the book to back up his rock ‘n’ roll paeans: post-chorus guitar solos, keyboard slides, rollicking tom breakdowns. Set opener “Room 13” sounded so much like an AM radio staple that I half-expected it to fade out at the end.

As for many touring musicians, the pandemic was a struggle for the whole band. Malin described the horrors of Zoom dance parties, and how “whenever we were allowed to see each other, we snuck into a studio.” The fruits of those sessions were the double LP Sad and Beautiful World from 2021, and this year’s Glitter in the Gutter. On “Backstabbers,” from the former, Malin sang about Cadillacs and drug dealers in hooks too catchy to argue with.

Twice during the set, Malin wandered his way down into the crowd like a preacher delivering his gospel. “She Don’t Love Me Now” was embellished with gorgeous harmonies, bringing us back to an era of bands like Boston where every member could sing. He climbed onto one of the tables in front of the sound booth, would pull the same trick again on “Brooklyn,” which was the kind of sappy, love-drunk ballad that made it all the more remarkable he didn’t fall from his vantage point.

So what was the message Jesse Malin had to deliver? “I think the music is the healing, the medicine, the life support, the thing that brings us together in this world,” he said. It may sound cheesy, but he made it easy to believe.