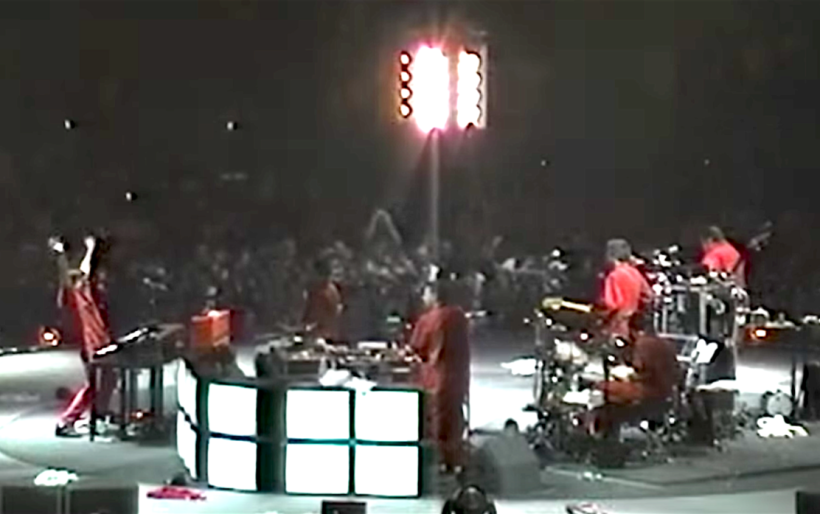 Beastie Boys at the First Union Center | still from video

This article was originally published on August 20, 2018.

NYC rhymesayers Beastie Boys were at a point of reinvention when they came to Philadelphia on August 20, 1998. They had a solid decade under their belts as a hip-hop combo — longer as a punk band — and with their fifth LP, Hello Nasty, they were pushing things further still. Out was the psychedelic groove and contemplative flow that defined their previous two albums, the iconic Ill Communication and Check Your Head; in was a retro-futuristic clubby sound, based around turntablist big beats and cartoonish sound bites, with no shortage of contagious energy.

For the live show, out were longtime collaborators DJ Hurricane and percussionist Mark Bobo, in was Mix Master Mike on the 1s and 2s, Alfredo Ortiz on the drums, and an expanded role for keyboardist “Money Mark” Nishita. On the band were coordinated red jump suits, while the band was on a slowly rotating stage as they performed in the round in the center of the CoreStates Center (the name the Wells Fargo Center went by at the time).

The 27-song setlist was a survey of just about all the styles, old and new, that the Beastie Boys had successfully rocked over the years. The old school punk of “Egg Raid on Mojo”; the frat party rhymes of “Time to Get Ill” and “Paul Revere”; the acid rap (decades before Chance) of Paul’s Boutique-era faves “Shake Your Rump” and “Egg Man”; 90s classics “Gratitude,” “Root Down,” “So What’cha Want,” and “Sabotage”; instrumental vibescapes like “Groove Holmes,” “Something’s Got To Give,” and “Sabrosa”…and a healthy assortment from Nasty that hit on the album’s highlights (“Remote Control,” “Body Movin’,” “Intergalactic,” “Three MCs and One DJ”) while somehow not even scratching its surface.

Watch video of the show below, care of Philly concert documentarian Markit Aneight, Were you at this gig? Leave your memories in the comments.