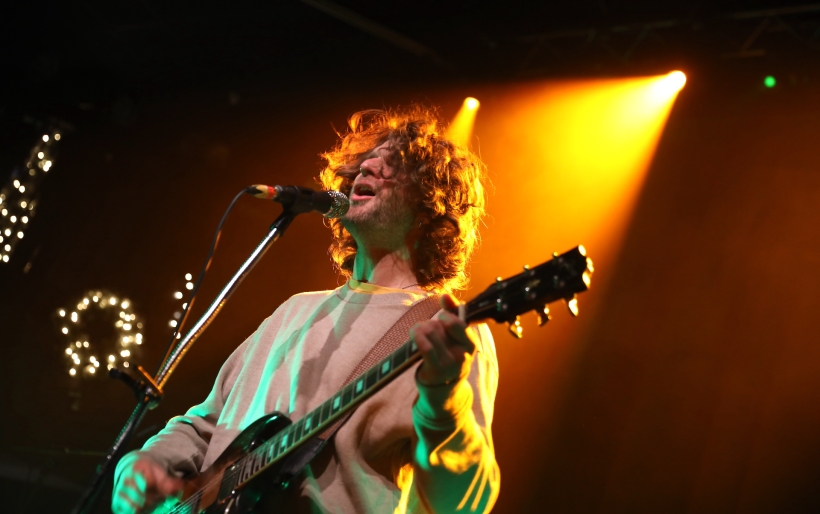 The Asbury Park, NJ singer-songwriter, who belongs more to the internet than one town in particular, showcased a number of songs from his latest EP French Blonde.

Former Deal Casino frontman turned solo artist Joe P joined XPN at Ardmore Music Hall this Friday for Free At Noon. The Asbury Park, NJ singer-songwriter, who belongs more to the internet than one town in particular, showcased a number of songs from his latest EP French Blonde and a smattering of viral TikTok singles including this year’s “Off My Mind.”

The last couple of years have been kind to Joe P, who found creativity in the restrictions of the pandemic. While his dream of traveling cross country in a van, performing directly for fans on their front lawns never came to fruition, he was able to grow his audience in another unorthodox way: playing hours-long, stripped down sets from home on TikTok every night.

Joe P’s success on the social media platform landed him a spot on the roster of boutique New York record label Neon Gold Records alongside Charli XCX and HAIM. And now, in addition to the hundreds of clips of songs debuted on the Gen-Z preferred app – with thumbnails documenting Joe growing out his shaggy blonde hair, then cutting it short, then growing it out again – fans can see Joe P perform at venues across the country.

At Ardmore, the charismatic frontman delivered a “too cool for school” set with a small band consisting of bass and drums equipped with a sampler pad. His straight-forward guitar rock style featured some fuzzy breakdowns and electronic interludes, and mostly served to frame despondent lyrics like “We watched movies until we fell asleep.”

The whole set had a Day-&-Age-by-The-Killer’s-era vibe to it, especially Joe P’s vocals which find their sweet spot in the rumbling mid range. Between songs, Joe P kindly and calmly addressed the audience, taking time to teach the audience the lyrics to French Blonde standout “Color TV” or noting, as many other Free-At-Nooners have, that 12 p.m. is much too early for a rock concert. “I’m a musician…this is like 7 a.m. for me.”

Winding down his set, Joe P performed a special mashup of “All Day I Dream About” with the classic lullaby “You Are My Sunshine,” before ending with the finale-worthy “Off My Mind,” his most popular song on Spotify. His Free At Noon performance is Joe P’s last Philly show of 2022, but you can find the artist online, and stream his latest EP French Blonde on Spotify.