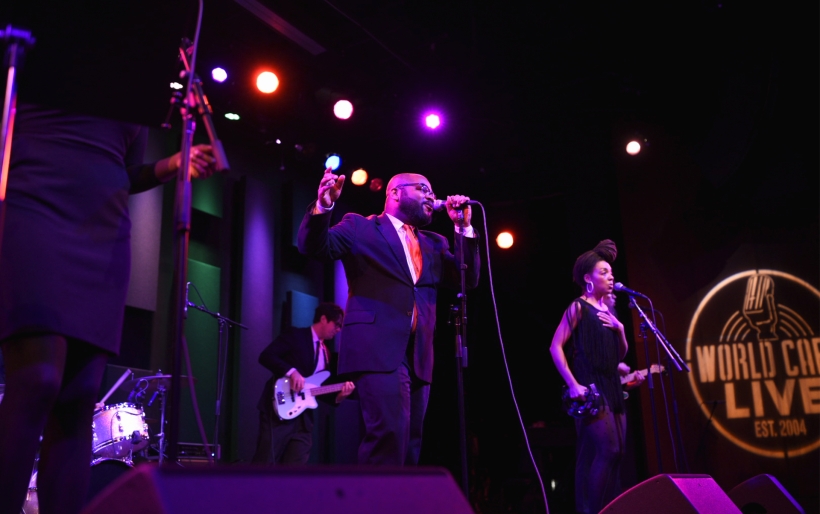 The Philly band’s concert left no doubt that their 10th annual Holiday Spectacular is sure to be just that — spectacular.

If the past week’s weather is any indication, it seems climate change has robbed us of yet another white Christmas in the Mid Atlantic. All that is to say, for those in need of other ways to boost their holiday cheer, Philly’s York Street Hustle are more than happy to oblige. This Saturday, December 17th, the band will be throwing their 10th annual Holiday Spectacular at World Cafe Live, and today’s Free at Noon was a thrilling preview of the evening’s festivities.

But first, Mike Vasilikos popped his head out early to announce some celebratory news of our own: for the first time since 2019, WXPN played host to a full year of Free at Noons (and all the recordings can be found in XPN’s archives!) When it was time for the ten-piece to take the green-and-red-lit stage, they emerged snazzily besuited and led by three powerhouses on the mic: Ms. Stephanie Cole, Ms. Imani Roach, and Ryan Williams, who served as ringleader with such enthusiasm that he had to mop his brow between each song.

Williams took the lead on opening number “What Christmas Means To Me,” one of two selections from the Stevie Wonder Christmas catalog. Imani Roach and guitarist Doug O’Donnell dueted on “Someday at Christmas,” with Roach impressively belting her verses an entire octave up. This was jazzy, exuberant big band pop music, played with just enough technical chops and heaps of soul.

Sandwiched between those two was a rendition of “Please Come Home For Christmas” courtesy of Stephanie Cole, the group’s newest member. As Cole lamented how “bells will be ringing the sad, sad news,” the song’s arrangement still felt triumphant. At least 80% of that festive cheer factor, I’m confident, was courtesy of percussionist Zachary Kuzel and his array of twinkly xylophones, tambourines, and sleigh bells. A “Jingle Bells” coda was just the icing on the figgy pudding.

The next suite of songs was a break in the strictly holiday programming, but no less spirited for it. “Cruelty” was an original off York Street Hustle’s 2020 EP, and an homage to classic Motown soul that Williams pulled off with an unimpeachable vocal turn. “River Deep, Mountain High” followed it up with even more ecstatic energy; the singers started dancing less like they were trying to get the crowd moving and more like they simply couldn’t help themselves.

Of course, everything paled in comparison to “Christmas (Baby Please Come Home),” which is a prime candidate for Best Christmas Song of All Time. Roach simply couldn’t help herself from stealing the show, delivering a devastating, note-perfect performance that proved the band’s Holiday Spectacular will be just that—spectacular.

Listen to a recording of the show below. York Street Hustle’s 10th annual Holiday Spectacular will take place on the World Cafe Live stage tomorrow, December 17th, at 8 p.m. Tickets are still available, and more information can be found at WXPN’s Concerts and Events page.