Thinking of a Place: The War on Drugs return to Johnny Brenda’s and Fishtown - WXPN 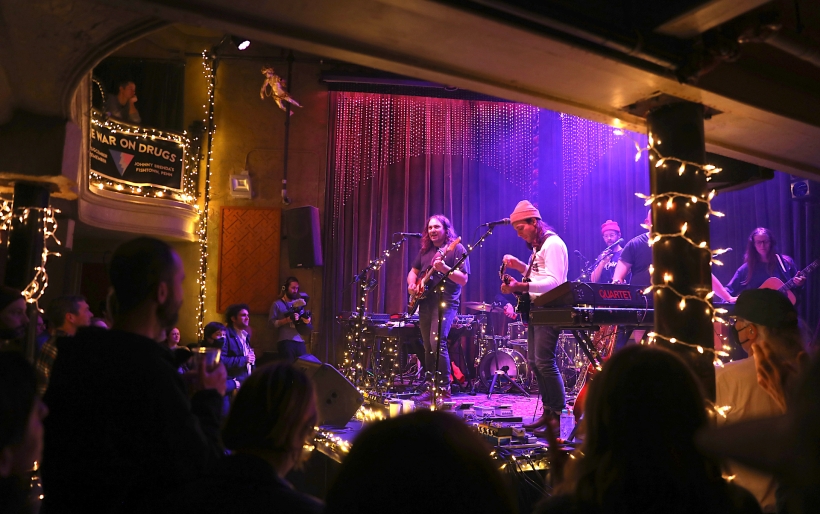 Thinking of a Place: The War on Drugs return to Johnny Brenda’s and Fishtown

A sit-down with the Philly-rooted rock stars at the club that gave them their start.

Long gone are the days of Fishtown being the final stronghold for the city’s working class Irish Catholic population. The main corridors of Philadelphia’s famed River Wards neighborhood are now lined with dense apartment complexes, fancy restaurants and dog-walking transplants from New York. But while the neighborhood as a whole may have changed, Johnny Brenda’s hasn’t.

“If I’m being honest, it feels like something’s been lost in the soul of Fishtown, but I do feel like Johnny Brenda’s is a little oasis within it,” said Dave Hartley, bassist of The War on Drugs, from a booth in the dimly-lit upper level balcony of JB’s where XPN interviewed the band Sunday night. “It’s awesome that Johnny Brenda’s feels exactly the same.”

Scattered about the venue floor were friends and family of the band, tables with boxes of Santucci’s square pizza to feed them and yellow strings of Christmas lights crawling over every inch of the balcony and every piece of gear onstage.

The whole band, who at this point had just finished soundchecking, was in town for the third edition of A Drugcember to Remember, a series of three shows in three days at Johnny Brenda’s slated to raise lots of money for the School District of Philadelphia. The first two featured special guests Rob Hyman of The Hooters on Monday (covering The Waterboys’ “Strange Boat”) and Craig Finn of the Hold Steady on Tuesday (performing his own song “Blankets” with the Drugs). Tonight, the band will play their final Drugcember show and complete more than just a run of three magical performances in Fishtown’s famed 250-capacity club. It’ll also cap off a year filled with “bucket list gigs,” as drummer Charlie Hall put it, including headlining Red Rocks Amphitheatre in Colorado and Madison Square Garden in New York City. 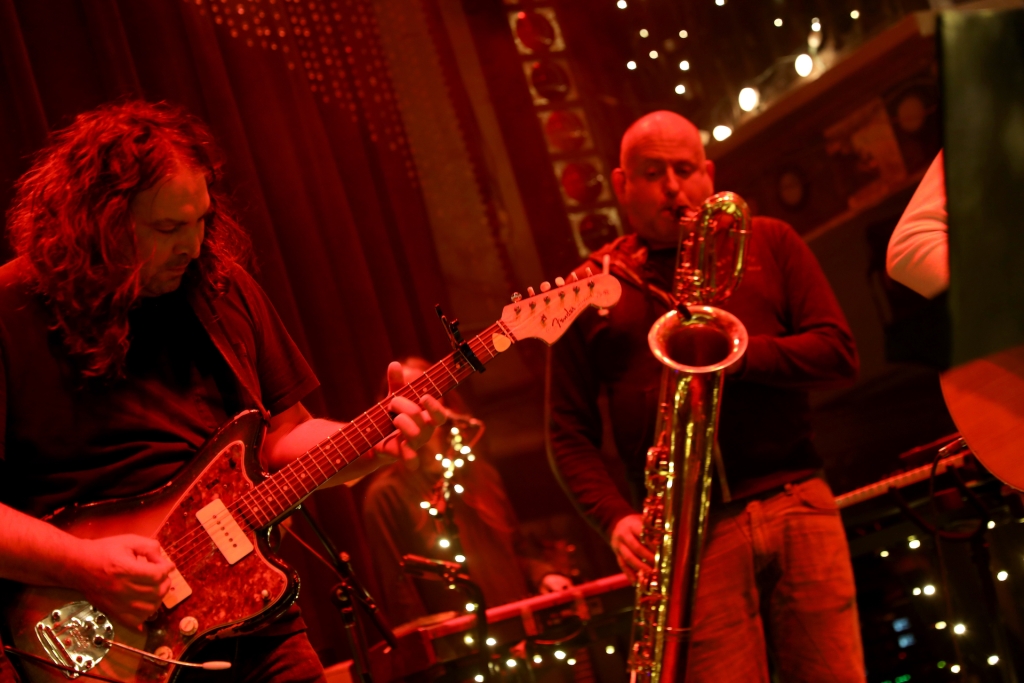 But for the War on Drugs, the 2022 edition of the event will simply add to the countless memories they’ve already had at the historic Fishtown venue. They opened the first ever show at JB’s in 2007. They drank Heaven Hill on the rocks here, saw countless great shows as fans and ate “those crouton things with the frickin’ garlic horseradish stuff,” which, according to Hall, used to always be available on the bar free for the taking.

“It was actually kind of gross,” he sneered. “But on the bar there were these jars of Oyster crackers and horseradishy shit.”

Then there was the time the band opened for the Besnard Lakes, a band with so much gear that most of The War On Drugs had to play their opening set on the ground.

“We had two drummers up on the stage” — Hall and former drummer Kyle Lloyd — “and the rest of us set up on the floor,” said frontman Adam Granduciel. “It didn’t sound good.”

And then there were the bands they saw as fans, of which there were many. Hartley saw Silver Apples. Hall saw The Clientele. Granduciel saw Richard Swift, David Vandevelde and Woods.

“I loved having a bar where you didn’t have to call anyone,” said keyboardist Robbie Bennett. “You’d just go to Johnny Brenda’s and sit at the bar. A couple friends would be there and you’d be like ‘who’s playing’ and we’d be like ‘alright, I wasn’t planning on going to a gig, but I’d spend $7 to get into the gig.’”

JB’s is one of the many places the band members have to hit up when they’re back in town – the ones who don’t still live in the area that is. Only two of the band’s members – Eliza Hardy Jones and Robbie Bennett – still live in the vicinity. Jones lives in Philly while Bennett lives in nearby Collingswood, New Jersey.

“Last time when we were here for a day off, I had to come here,” said Hartley, who now lives in Asheville, North Carolina. “I had a burger.”

Granduciel also eats at his favorite spots when he’s back in town, which usually includes ReAnimator coffee, a turkey sandwich from Palm Tree Market and Santucci’s pizza.

“I love Philly food tours,” he said. “They’re like my favorite thing coming back here.”

The other thing Granduciel misses about Philly? His main mode of transportation, which was a 15-passenger van. He could parallel park it anywhere, he claimed.

“I used to just find something on the side of the street,” he said, “and throw it in my van for two months.” 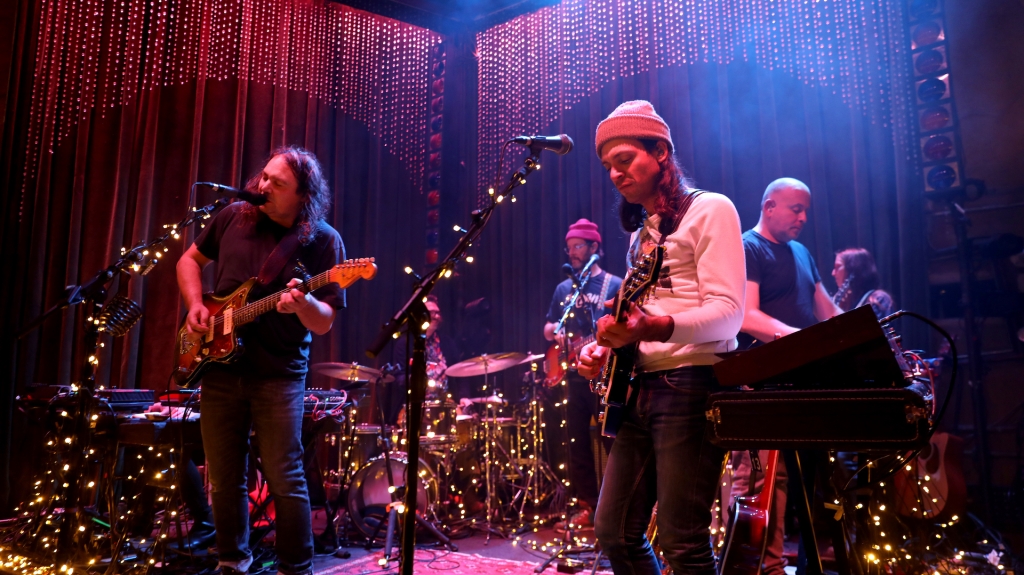 Since his days of living in Fishtown, Granduciel hasn’t really been connected to any neighborhood he’s lived in since he moved to Los Angeles in 2014, and he doesn’t believe he will ever feel that a part of a neighborhood again. And that’s just one reason why the band only plays charity club shows here.

Over the years, Granduciel said, previous Drugcembers have helped secure funds for the School District of Philadelphia that helped pay for new school uniforms, lockers and a repaved playground.

“We lived in Fishtown and South Kensington and played music and worked on an idea and we just wanted to be able to give back to the city that allowed us to do that,” said Granduciel. “It feels good to be able to come back here and do something for the place that we all came up as a band.”