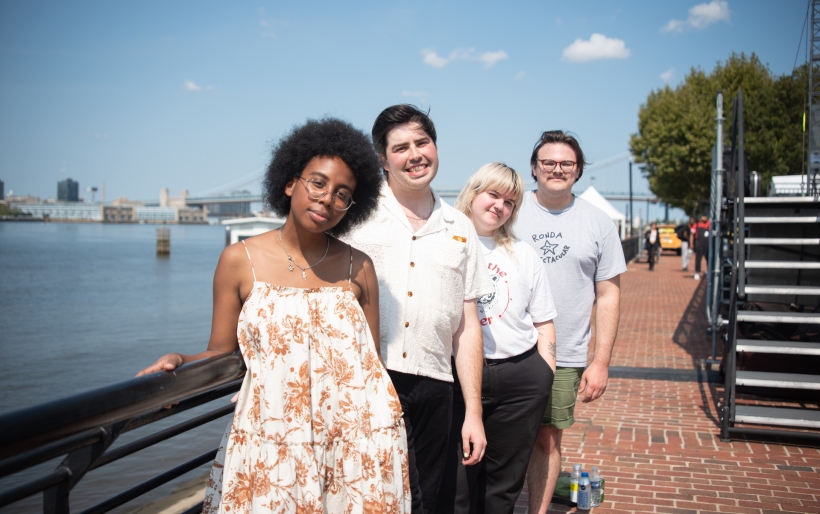 Highnoon brings pure pop magic to “Are You With Me”

The Philly four-piece’s new single is accompanied by a music video showing a cosmic picnic on Belmont Plateau.

Philly indie four-piece Highnoon is getting 2023 underway with a dazzling new studio recording of “Are You With Me,” a favorite of their live sets from over the past year. Heard previously in their 2022 Key Studio Session, the bright and brisk song builds and blooms in step with classic alt pop artists like The Sundays, as frontperson Kennedy Freeman meditates on how a person can have a confounding presence (even in their absence).

The song officially hits streaming services on Monday, but today we’ve got an early listen and look at Highnoon’s music video for “Are You With Me.” Directed Lucy Soutter, it intercuts footage of the band performing with scenes of a cosmic picnic on Belmont Plateau where Freeman and their bandmates dig their hands into brightly-colored cakes and veggie trays. Accented with 3D animation Matt Michaud, the video follows Freeman on a journey through a dreamscape of magical realism, ending along a river and a window into another part of the world.

“‘Are You With Me’ is the most thoroughly I’ve ever been able to see one of my ideas through,” Freeman tells us over email. “Working with my friends Danny Murillo to produce the song and Lucy Soutter to create the video has been such a challenging and wonderful experience. The song came to me while I was playing guitar in my bedroom during a time when I was feeling most inspired by pop music. It’s been a privilege to be able to give a song enough time and effort to sound so big, emotive, and cathartic. I loved filming the video with my band and I love playing it with them even more.”

You can see Highnoon play it live this Wednesday, January 11th, when they perform at Johnny Brenda’s alongside Kississippi and Julian; tickets and more information on the show can be found at WXPN’s Concerts and Events page.