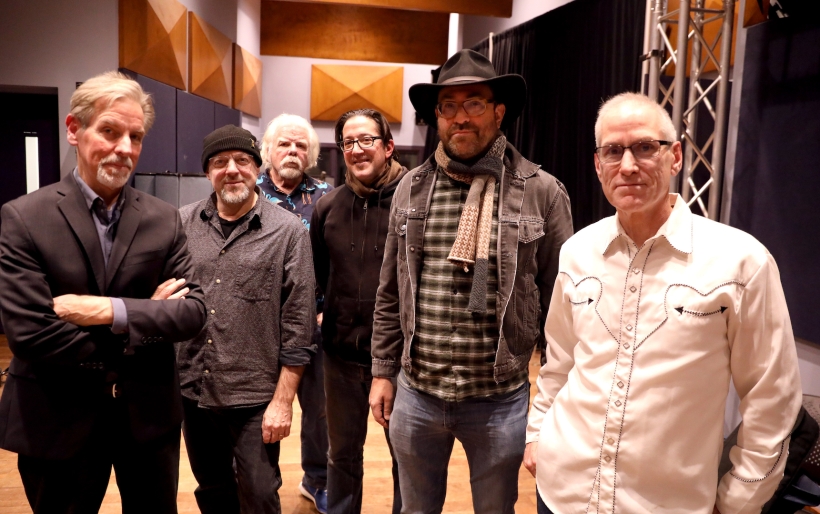 The long-running Philly roots-rock sextet plays selections from their latest studio album ‘Cowboy Dreams’ ahead of a winter residency at Fergie’s Pub.

On New Year’s Eve, John Train — the 27-years-running “band, not a person” of the Philly alt-country world — released its seventh full-length release Cowboy Dreams, and it’s about to spend the winter celebrating. The sextet attracted something of a cult following in the city for its legendary runs of free concerts upstairs at Fergie’s Pub in center city, and beginning next Friday — and continuing every Friday this winter and into the spring — John Train will play live on that storied matchbook-size stage, bringing on the weekend with warm and welcoming roots rock tones.

Centered around the husky vocals of singer and songwriter Jon Houlon, John Train is comprised of scene vets Mike “Slo-Mo” Brenner on dobro, Mark Tucker on electric guitar, William Fergusson on mandolin and bouzouki, Mike Frank on bass, and Mark Schreiber on drums. Together, they channel a range of influences from the roots rock pantheon: in this Key Studio Session recorded live at WXPN studios, you’ll hear undeniable tones of Johnny Cash as much as the raucous jams of Uncle Tupelo, most notably on the opening “Blood Horses.”

Our equine friends factor heavily into this set of songs John Train performs. The album’s atmospheres evoke the American west or, as Houlon frames it up, “west meets east”; “Concrete Cowgirl” is a storytelling vignette of a journey along the Wissahickon trails with Philly’s Erin Brown and her Philly Urban Riding Academy, while “Twister” is a bittersweet dedication to a horse Houlon and his wife often traveled with, who passed away several Christmases ago.

Also in the mix is the title track of Cowboy Dreams, a cover of an early 2000s single by UK sophisti-pop faves Prefab Sprout; listen to the session in full above, watch video of the performances below. John Train’s 2023 residency at Fergie’s Pub begins Friday, January 13th, and the band plays for free every week from 6 to 8 p.m., through March 31st. More information at their website, trainarmy.com; grab a copy of Cowboy Dreamsat Bandcamp, or at your favorite local record store.