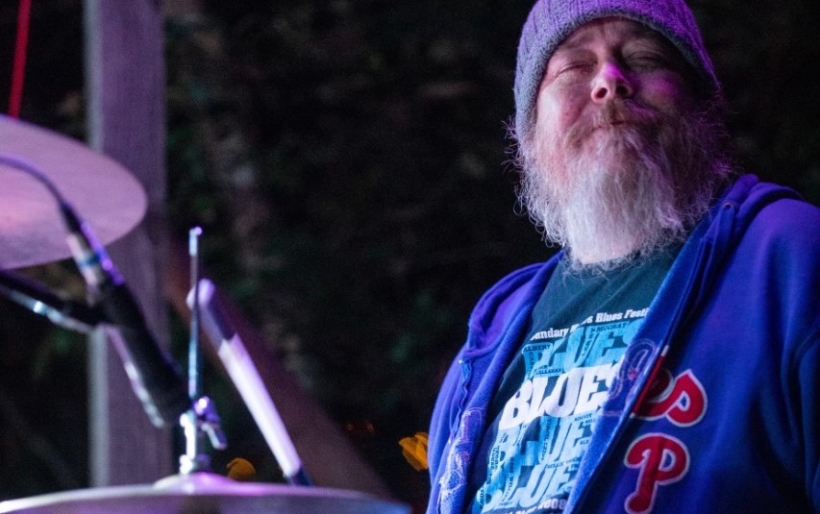 Remembering Philly’s Tom Walling, a gentle giant of the drums

The veteran Philly percussionist passed away in November, and his friends in the music community are celebrating his life at Underground Arts this weekend.

Over Thanksgiving weekend, you could see love and grief pouring from all corners of the Philly music community as word got out that veteran drummer, collaborator, and educator Tom Walling passed away suddenly on November 25th. He was 51 years old. Particularly in the Manayunk / Roxborough music scene where he devoted so much of his time, Walling was remembered as a versatile and adaptable drummer, one who could play with precision but was more apt to ease back and flow with the style of whatever players he was sharing the stage or studio with. He’s also thought of warmly as a gentle giant, a formidable presence in person and behind his instrument, but one who — once he opened up to you — was full of camaraderie, compassion, and passion for whatever he put his energy to: his music, his garden, his cooking and more.

Following up on a memorial service on December 3rd in the shore town of Manasquan, New Jersey, where Walling grew up, a celebration of life concert is planned this Saturday, January 14th, at Underground Arts — the venue where Walling was the longtime cook. Many artists who he performed with over the years are slated to play, from singer-songwriter acts like Deb Callahan Band and Matt Santry to a reunion of Walling’s force-of-nature hip-hop fusion outfit Burndown Allstars.

“It’s going to be a pretty amazing event that really shows the breadth of Tom’s involvement in the music community,” says co-organizer Barbara Adams, who first connected with Walling in the 90s when she was the audio engineer at South Philly’s Sonic Studios and Walling was one of her go-to session drummers.

“He was there whenever we needed somebody to play drums,” she says. “I had opportunity to record him with Mia Johnson, Mike Dutton, and so many more.”

Walling was born in Wall Township, New Jersey, on March 15th of 1971, and graduated from Wall High School; he moved to Philadelphia for college, and got his bachelor’s degree in percussion performance and his master’s in music education from University of the Arts. His tastes were wide-ranging and versatile, from Led Zeppelin to John Prine, and in Philly, he connected with a network of similarly adventurous musicians. He played in a jazzy groove-oriented instrumental trio called Gravy while working as a session drummer and live band member for the city’s turn-of-the-millennium singer-songwriters — the folks he connected with through Adams.

In 2001, Walling co-founded Burndown Allstars with singer-guitarist Dave Quick — a singer-songwriter in his own right, as well as Adams’ spouse, and someone he connected with as Quick’s band Princes of Babylon wound down. The project also featured guitarist Tom Copson Jr., bassist Rico Joseph, and MCs Kuf Knotz, Carlito, Rok Bottom, Arcane, JawnZap7, Syne, and Lord Biz. Together, they fused hip-hop, funk, and alternative rock in a heady post-millennial melange in step with nationally-renowned acts like Ozomatli and Jurassic 5. The band released three albums, most notably 2007’s Wake UP; the same year that album dropped, they toured the U.S., and were featured on the Fuse Network reality show Bodog Battle of the Bands, placing third.

Despite his commitment to that band, Walling still managed to get involved with other up-and-coming artists in the city, giving each project his all. Deb Callahan said he’s played with her band since 2006, and “I would say he was on 90 percent of our shows since then. And there’s a lot of years we were really busy, booking months ahead. But he toured with us, we did a lot of blues festivals and concerts. He’s traveled all up and down the east coast to midwest, trips to California and the Virgin Islands.”

Callahan remembers seeing Walling play live for the first time in 2006; she and guitarist Allen James popped in one a gig he was playing at Dawson Street Pub when they were in need of a new drummer. “We checked out the set and we loved his vibe, his feel,” Callahan says. “We heard the snap of his snare drum and said ‘that’s it, that’s it.'”

Callahan and her bandmates, which also include bassist Garry Lee, have worked with other drummers before and since they brought Walling into the fold, but they say he was a perfect fit. He understood the concept of improvisation, Callahan said, describing the way he’d tap out a rhythm to match her vocal runs — something a lot of drummers don’t think to do — and praising his versatility. “I am in the blues genre, though I write a lot of singer-songwriter music too,” she explained. “But I don’t have a typical blues band. We don’t do only shuffles, we do a wide variety of music. What was great about having Tom is he played a wide variety of music too. He could do something funky, he could do something jazzy. He could do something with a New Orleans kind of vibe, he could really do a folk vibe.”

Lee says that in his playing, you could hear the love and appreciation he had for so many different styles of music. “He just enjoyed playing so much,” Lee says. “Punk bands, prog rock, and also really simple folk stuff. He would request we do ‘Angel from Montgomery.’ It wasn’t wasn’t like he just wanted to get up and bash away. He had such sensitivity and subtlety. It doesn’t come along that often.”

The core trio of Walling, Lee, and James first connected in Callahan’s band and went on to work together in a variety of other settings. They had an instrumental trio called Earthbound, and they also backed the gritty electric blues of Greg Sover. They worked in the poppy singer-songwriter zone with Matt Santry. “I believe he and I had a psychic connecting, my playing and his playing,” says Lee. “It just worked. I feel in a way as if I lost my right arm.”

Santry has been playing with Walling since the early aughties; they came together when he needed a session drummer, and the connection was instant. “I had seen him play with K-Floor, and he just came in the studio and crushed it,” he says. “I just started calling on him for gigs, and we became friends pretty quickly.”

No matter the setting — a nightclub, a casino, or a wedding — Santry said you could count on Walling’s drive and commitment. “Even if we were doing a cover gig, he would put everything into it,” Santry said. “The last gig he played was with me, it was a wedding gig the Sunday before Thanksgiving. I was playing ceremony separately, I walked in to where he was playing cocktail hour with rest of band, doing instrumental stuff. He was so happy, talking to himself out loud about how grateful he was to be playing with this particular group of musicians at this particular time.”

Santry praised Walling’s laid-back, behind-the-beat style of playing — a phrase also used by Callahan to describe his appeal — but said that his approach comes from a degree of mastery that was clear any time they got into a conversation in the studio. He recalls working on remote recording sessions during the pandemic lockdown, and said that when Walling’s first pass at the song “Your History” didn’t quick match what he and the producer had in mind, they described their vision, and Walling’s response, was “Oh, you mean like this,” followed by a perfectly-executed pass and a music theoretician’s explanation of what he’d just done.

“He was always a very technical guy, and he loved to talk about it,” laughed Santry. “In studio sometimes he’d get over my head.”

His multiple-degree education shone through at times like that, but as Lee sees it, that ability was in Walling anyway.

Beyond being a technically phenomenal drummer, Walling was described all-around as someone who became family to everyone he worked with.

“We have a son, he’s 14 now, and Tom was the first person who showed up at the hospital the day he was born,” says Adams. “He was very much a part of my son’s life, he taught him how to play drums, and instilled that passion in him.”

Santry says that Walling could be shy, depending on the setting; “If you didn’t know him, he seemed stoic and not very responsive to like the normal chitchat in a group. But then he would pull you aside and tell you how a moment he had made him feel. You didn’t expect it. He was a teddy bear in the facade of this gruff Philly sports fan.”

The “bear” image is used by Callahan too, albeit differently: “Tom was a very warm, big-hearted person who could be an interesting combination of a bear who just rolled out of bed and somebody who wanted to be there as a team player. He was very kind, very caring. ‘You want some heirloom tomatoes from my garden?’ or ‘Try some of this ghost pepper hot sauce I made!'” Adams too praises Walling’s love of food, saying he was an amazing cook and recalling how, during his stint at Underground Arts, he’d often times get up on stage to play a gig, and then go back to the kitchen and work.

Adams sums it up: “Tom was one of a kind, an amazing soul who touched many lives through his music, love, and friendship.”

Underground Arts’ Tribute to Tom takes place on Saturday, January 14th and features Deb Callahan Band, Matt Santry, The Fractals, Burndown Allstars, Dave Quicks, Yonder Hearts, & Many more. Tickets and more information on the show can be found at WXPN’s Concerts and Events page, and donations at the show will be collected for MusiCares.