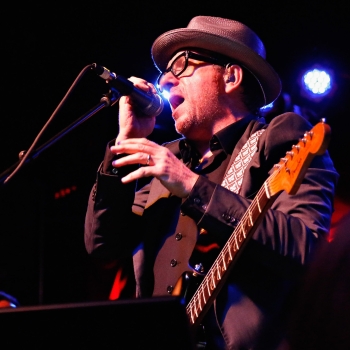 Who They Are: British new wave rocker Elvis Costello produced some of the most iconic records of the late 70s and 80s. His illustrious and often-controversial career began in England, but Costello found a wide audience in the U.S. after signing to Columbia Records for his sophomore record, This Year’s Model. Costello’s backing band, known as the Attractions and later The Imposters, has always been comprised of talented musicians including members of Huey Lewis and the News and the Doobie Brothers. Elvis Costello is the only musician to be banned from the late-night show Saturday Night Live; against the wishes of creator Lorne Michaels, Costello performed live his song “Radio Radio,” which critiques the commercialism of TV and radio.