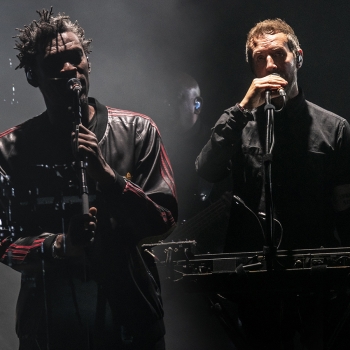 Where They’re From: Bristol, UK

Who They Are: A heady fusion of musical styles from hip-hop to house to jazz and dub, Bristol’s Massive Attack emerged from the crate-digging record store culture with a true do-it-yourself spirit. By melding together complementary components of genres they loved, they arrived at a truly singular sound – dubbed “trip hop” by the 90s alternative music press. Comprised of vocalist Robert “3D” Del Naja and DJs Andrew “Mushroom” Vowles and Grant “Daddy G” Marshall – with a young Adrian “Tricky” Thaws featuring in their original lineup – the band delivered an instant classic with their 1991 debut Blue Lines (particularly its soaring single “Unfinished Sympathy”) and followed it up with equally inventive records, making their biggest impact with 1998’s gripping Mezzanine, which featured memorable vocal contributions from reggae singer Horace Andy and the ethereal-voiced Elizabth Fraser of Cocteau Twins. Though their 21st century output has been moderately glacial, when they do release new music, it’s nostalgic, futuristic, and of the times all at once.