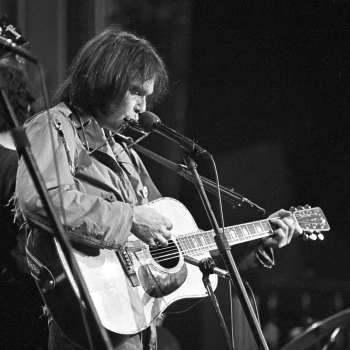 Singer-songwriter Neil Young is a rare commodity; an artist who’s been at it for over a half century, who’s been consistently active the entire time, and who continues to challenge himself at every turn of his career. A player in the Winnipeg folk scene, his first break came in the mid-60s when he moved to Los Angeles and co-founded Buffalo Springfield with Stephen Stills. This led to their storied supergroup with David Crosby of The Byrds and Graham Nash of The Hollies, as well as a vast and eclectic solo career that runs the gamut from rumbling rustic rock with his band Crazy Horse and tender acoustic country / folk, experimental 80s synth excursions, and more. In the late 80s, he penned the iconic post-Reagan anthem “Rockin’ In The Free World” and was embraced by a new generation as “the godfather of grunge,” due in part to Pearl Jam’s enthusiasm for his work. His discography surpasses 40 LPs – including the stirring score to the Jim Jarmusch film Dead Man – and he’s an active philanthropist and humanitarian outside his musical work, speaking up about environmental concerns and playing shows to support The Bridge School, an educational organization for children with severe verbal and physical disabilities.