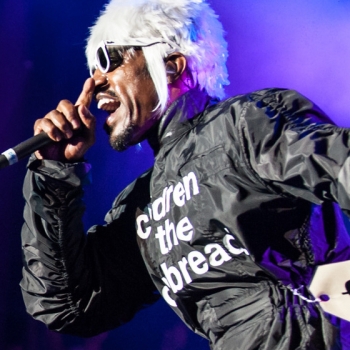 Where They’re From: Atlanta, GA

Who They Are: “The south got something to say.” Rapper and singer André Benjamin, André 3000 spoke those words onstage at The Source awards in 1995, a year when much of the music world still saw hip-hop through an “east coast vs. west coast” lens. The co-frontperson of Atlanta sensations OutKast was correct, and folks began to listen over the ensuing years, as his duo with Antwan “Big Boi” Patton blended funk, psychedelia, and rock and roll into a heady stew, basted in the sounds of their longtime production collaborators Organized Noise and seasoned with guest spots by friends and neighbors Ludacris and Killer Mike. Always forward-thinking players, their 2003 double album Speakerboxx / The Love Below saw them going solo while staying unified, with each MC having time to shine on their own disc, but remaining a force together. They dabbled in film in 2006’s Idlewild, and after a hiatus, got back together briefly for a thrilling summer festival tour in 2014.