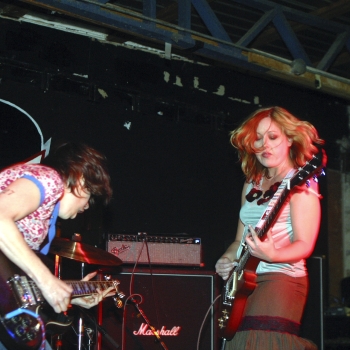 Where They’re From: Olympia, WA

Who They Are: Sleater-Kinney is a riot grrrl-era, indie rock band founded by Carrie Brownstein and Corin Tucker. After releasing seven critically-acclaimed albums in a decade, and being heralded as one of the greatest rock groups of the early aughts, the band went on hiatus. They returned almost ten years later with continuing shocks and surprises including their first live album, a collaboration with St. Vincent, and the departure of long-time drummer Janet Weiss. Sleater-Kinney is not shy about being labeled “feminists;” the dissolution of gender roles is a theme on many of their albums, and is the subject of popular single, “Modern Girl,” the lyrics of which serve as the title of Brownstein’s memoir.