The War And Treaty - WXPN

The War And Treaty 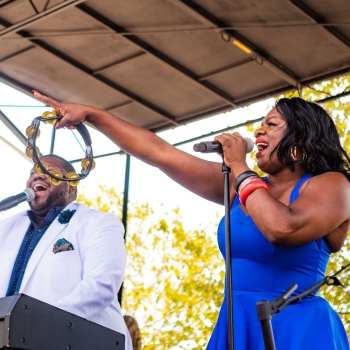 Where They’re From: Nashville, TN

Who They Are: The War and Treaty are husband and wife Michael Trotter Jr. and Tanya Blount. The Americana music duo mix together blues, gospel, country and soul music for an uplifting, joyful sound. They couple met in 2010 at a music festival when both were working on their musical careers. Trotter began his musical career in the military when he served in the Iraq War, when he learned to play piano, writing and performing songs about his fallen comrades. With the music festival as a launching pad for their musical and romantic relationship, The War and Treaty’s big initial musical moment was in Nashville at the Americana Music Festival in 2017 when they stepped in to fill a spot by the headliner who had gotten sick. That night at the Cannery Ballroom two mostly unknown musicians burst on the scene like the bright stars of hope and optimism they’ve become.