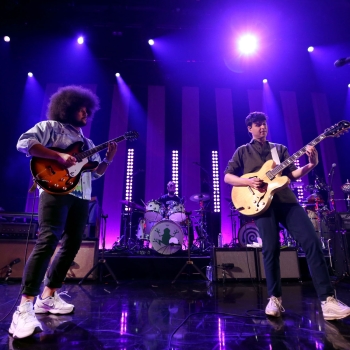 Who They Are: Vampire Weekend was fast-tracked into celebrity and critical acclaim in the late aughts. Formed by four undergraduate students at Columbia University, and rooted in Ezra Koenig’s adventurous and witty songwriting, the band delivers a thoughtful mix of world music — specifically Afropop influences — and North American punk. Their self-titled debut in 2008 garnered attention from blogs and critics even before it was publicly released. Vampire Weekend won the Grammy for Best Alternative Music Album for their record Modern Vampires of the City in 2014. Founding members Ezra Koenig and Rostam Batmanglij have pursued successful careers in music production as well.