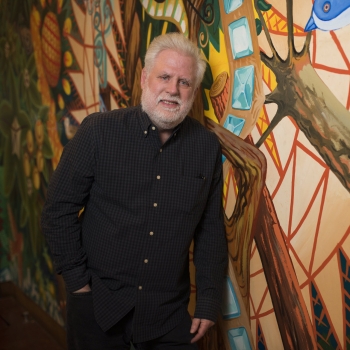 Been at this awhile. Originally from Swarthmore in Delco where I used to run in the fog behind the truck spraying DDT. That’s where I first heard Bob Dylan, went to Charlie’s Hamburgers, discovered I had little talent as a musician, went to college, and to my surprise got hired at WMMR for a Sunday morning show in 1970.

Highlight of the MMR years was dancing with Dianne, Bruce’s girlfriend, to “Thundercrack” at the Main Point. Spent time at WIOQ in the 1980s where my Friday Flashback dance party at the old Chestnut Cabaret, along with a shit ton of beer, vodka, and repeated play of “Build Me Up Buttercup,” facilitated Philadelphia’s mating rituals for seven years. Was the original host of World Cafe for 26 years starting in 1991.

Dave’s World is the synthesis of all my radio experiences and I love doing it! Especially enjoy a perfect segue and getting feedback. on Sunday from 11 a.m. – 1 p.m. I am usually on Twitter.