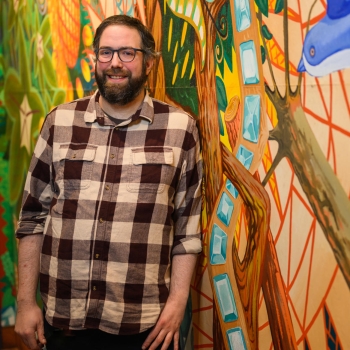 WXPN has always been part of my life’s soundtrack. Growing up in Norristown, PA in the 90’s, listening to Kids Corner allowed me to connect with other children my age and have my first experience talking on the air! My parents would ease into the weekend mornings with Sleepy Hollow, and in the car, it was always a battle between WXPN and WOGL (I was the big oldies fan!). My dad had boxes of old cassettes that he had taped from Gene Shay’s The Folk Show. Popping one of those in would create a feeling of peace and transport me to my earliest memories of being on that magical field at The Philadelphia Folk Festival.

In my late teens and into my twenties I was playing in a couple dozen or so bands. I ran three successful open mic nights where I discovered the joy of the Philadelphia music community and the pleasures of hosting. It was then that I more fully realized the importance of folk music in my life and decided to learn as much as I can about it. I approached Gene Shay in 2013 and he invited me to hang out on a Sunday night during his broadcast. I assisted with Gene’s show for about two years while also hosting a weekly program on G-town Radio called Bridging the Gap. When Gene was ready to retire I worked closely with Bruce Warren to make sure he got the sendoff he deserved and we created four very special episodes.

Learning from Gene Shay and following in his footsteps as the host of The Folk Show has been an absolute thrill. I keep him in mind as I create an atmosphere where we are all just hanging out and listening to music together. The “folksiness” is as authentic as it is essential. There truly is nothing I’d rather be doing on a Sunday night!