Land of the Lost / Your First Cup / Q-Zine 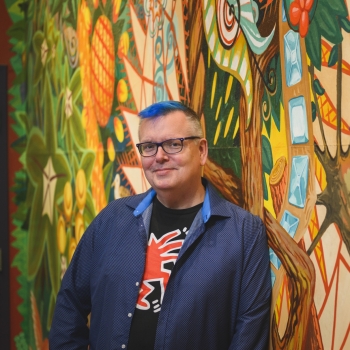 Born and raised in Philly, I pride myself on my insane level of #PhillyLove!

I began spinning the new wave sounds when they were NEW wave sounds , working in various underground clubs in Philadelphia during the gritty era of 1981-1990. From off-radar spots like The Love Club to commanding nights at Philly’s premier alternative hotspots The Kennel Club, Omni’s, and a few special nights at Danceteria in NYC, the Rock of the 80s became my passion.

Professionally, I was general manager and co-founder of Au Courant NewsMagazine, Philadelphia’s gay arts & culture paper, back in 1982. In 1988, I began a wonderful journey at WXPN, where I have worn dozens of various hats over the past three+ decades including producing Kids Corner, America’s longest-running daily radio show for kids.

During that same time, I launched a weekly guide to the underbelly of Philadelphia nightlife – called THING – it didn’t last long, but led to my role as publisher of Swirl Magazine in 2001. A glossy full-color weekly guide to gay arts/culture in Philly, it just began to take hold in September of that year – sadly, as the psyche of America shifted after 9/11, the advertising dollars dried up and we had to cease operations.

Since 2003, I’ve shaped Philly’s nightlife scene by introducing the new wave genre to a whole new generation of ears with my monthly Sex Dwarf dance party inside the historic Divine Lorraine Hotel, to hosting Land Of The Lost (my 4-hour block of the Rock of the 80s), to welcoming 80s bands as they return to the city for live concerts… it’s all about the music!