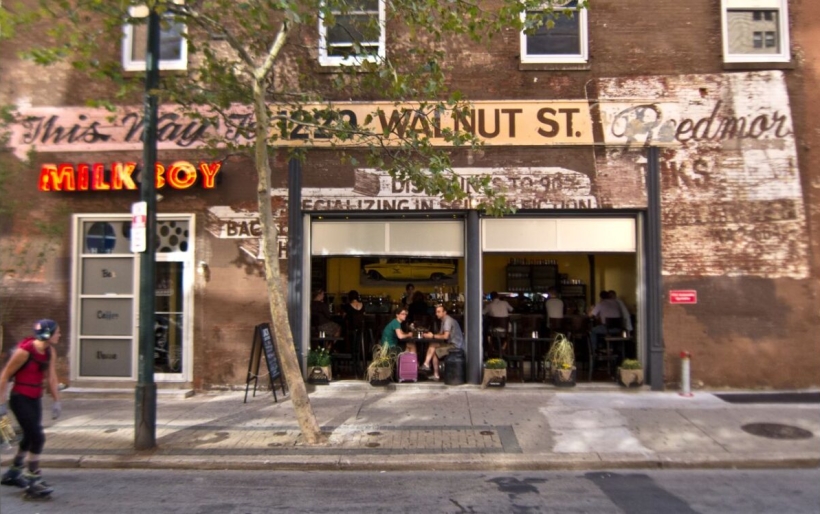 In 1999, a partnership began between Jamie Lokoff and Tommy Joyner, and the result was the MilkBoy empire we know today. Starting out above Zapf’s Music off of Roosevelt Bouelvard, the two joined forces to take Joyner’s MilkBoy Recording Studio to the next level. After two years at the North Philadelphia location, Lokoff and Joyner chose to move the studio to a space in Ardmore, where it resided for just over ten years until moving to its current location – 7th and Callowhill, the same building as the Electric Factory. Before the studio was even moved, they chose to expand their brand, create something more out of MilkBoy, something that everyone could enjoy. I got to chat with Tommy and Jamie about how they went from just a recording to studio to a full out bar, venue, coffee shop combo and their upcoming MilkBoy Philly anniversary shows.

The Key: How did you go about expanding the recording studio to become a venue and a coffee shop?

Tommy Joyner: We were approached by people in the town and became very involved in Ardmore. I was on the Board of the Ardmore Business Association, and Jamie on the Board of Ardmore Initiative. The coffee shop/music venue was opened in February 2006 followed by the Bryn Mawr location in 2007, which no longer exists. Then just over a year ago, the folks who owned the property in Center City contacted us. We were looking to get into Philly so it was really perfect timing.

TK: What is the difference between MilkBoy Coffee and MilkBoy Philly?

TJ: MilkBoy Philly is a bar and a rock club. It’s larger, and we’re able to do louder shows because the PA is robust, to say the least. The stage is bigger, and you’re more likely to see a national act perform at MilkBoy Philly. We have to be choosy about doing all-ages shows there, whereas MilkBoy Coffee is smaller, more for acoustic-oriented acts, and always all-ages and BYOB. They are both booked really well to showcase the best talent, but they feel really different from each other.

TK: How did you choose the bands you wanted to play at the anniversary show?

Jamie Lokoff: All of the acts have some sort of connection/relationship with MilkBoy; whether they are friends who have played at the locations previously, been in the studio, personal friends of ours, or recorded under MilkBoy. We reached out to all of them to see if they would perform and they graciously accepted.

JL: Thursday, Friday, and Saturday are the prime days for shows. So why not do all three?

How do you feel MilkBoy Philly has progressed over the past year?

JL: We love that place, we’re very proud of it. I like to go there and hang out, I think it’s such a great environment. I don’t go to other bars, I just go there and hang out. I’m so happy with how it’s been received, I love the way the room sounds upstairs. For our first year it’s been a tremendous success. I think some people still don’t know about it, but it has been steadily growing month by month.  It’s a place built for where The Black Keys were six years ago, it’s the bands you don’t know about that are just starting to percolate. We’ve had some great bands you may or may not have heard of, that will grow and become huge. And that’s the beauty of a place like this, seeing a band before everyone knows about them. Some bigger acts that played include Spacehog, Youth Lagoon, and a 1 a.m. after-party with Skrillex.

TK: What has been one event that stands out in your mind as particularly awesome?

JL: One was one of our favorite bands called “Le Butcherettes”, a female-fronted band. She came out in an apron with blood all over it totally in character. It was sexy, it was rock. Other favorite shows include Leslie & the Ly’s, Craig Finn from The Hold Steady did two sold out shows, and Lisa Hannigan.

TK: How do you see yourself standing out among the other Philadelphia venues?

JL: We just try to do what we do. There’s nothing like MilkBoy in Center City. We’re just who we are, organically, because we started as a studio so we have the music in our blood. We moved to coffee, so we’re open at 7 in the morning and then we added the bar element and the venue, so we’re very unique. You come to our place at 8 a.m and you’ll see shifters from Jefferson Hospital because they just got off work. In terms of the bookings that we do, we’re all trying to pull from different artists out there, just trying to put on good shows. You know MilkBoy, you know that we booked it, so it will be a good show.

TK: What would you like to change or see happen as time goes by?

JL: Continue to do what we’re doing but just get better at it, we’re always tweaking and trying to get better and improve what we do; and just maximize the place to the best of our abilities.

The MilkBoy Philly anniversary shows will be Thursday, Friday, and Saturday evening. All shows are completely free for folks 21+, doors open at 8:30 p.m., shows kick off at 9:30.