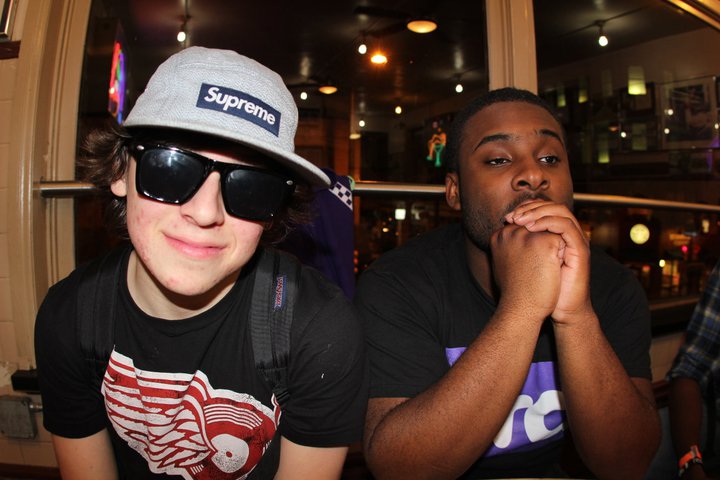 Friends since childhood, rap duo DeQuincy “Moosh” Coleman McRae and Oliver “Twist” Feighan, better known by their performance name, OCD: Moosh & Twist, continue their rise as one of Philly’s most popular hip-hop acts. The pair have been recording together since they were still in high school–which, surprisingly, was not so long ago, despite their seasoned performance style.

Moosh and Twist caught audiences by surprise in 2011 with a fresh perspective on following dreams and keeping cool under pressure with addictive tracks like”Possibilities” and  “Take Me Back.”  After the explosive success of their debut mixtape, Up Before The World, Moosh and Twist continued recording and started popping up in different venues throughout the area, which landed the pair to a tour with Aer this past summer. In the midst of the chaos preparing for their upcoming headlining tour, we swapped e-mails with Moosh and Twist to get the skinny on how they started, what they’ve got coming up projects and their shared excitement about performing.

The Key : So how did you two start rapping together?

Moosh & Twist: Well, we started rapping together in seventh grade with our Spanish teacher at The Philadelphia School. We would record in the basement of our school, and that’s really where our desire to become musicians started.

TK: When did you guys start performing in public?

M&T: We would perform for a few small birthday parties every now and then for our friends early on in high school, but we didn’t seriously perform until our junior year in high school.

TK: Was it difficult to stay friends and record music while going to different high schools?

M&T: Music really kept our friendship together. We’re pretty sure we would have remained best friends and all, but without the music there’s really no telling where we’d be.

TK:What in particular is it that you think makes the two of you work so well together?

M&T: We’re very different which creates a really healthy balance with everything. When it comes to music, business, or just life on the road, we agree and disagree a lot. It’s great to have such a dope friendship as our foundation because we can disagree and settle on a compromise, which usually results in making the right decision.

TK: Where did the nicknames “Moosh” and “Twist” come from?

M&T: Well, Moosh has always been Moosh–his family gave him that nickname. And Twist came from Oliver “Twist.”

M&T: It’s a really crazy feeling watching fans’ faces when popular songs like those come on. Everyone in the crowd gets hype before we even do anything. It makes it really easy to take the energy coming from the crowd and use it on stage.

TK: What inspires you as musicians?

M&T: From gospel to soul music to alternative rock, everything inspires us. In hip hop, our major influences would be Outkast, Kanye West, and Drake.

M&T: It was awesome–they’re the homies now! We had a lot of fun, and we wish them all the best.

TK: Who would you like to collaborate with or is that something you’re not really interested in?

M&T: We did a track with Black Thought of The Roots, which was an honor. The Roots have always held it down for Philly, so working with him was amazing. And we really don’t do many collabs…there’s never much room on a song because every song is basically OCD featuring Moosh and Twist anyway.

TK: What was your favorite show you’ve done so far?

M&T: Oh man. We’ve had a lot of crazy shows, but the favorite would probably be the TLA last January in Philly. It was sold out, Twist’s birthday, we just released The Vestibule, …the whole night was pretty emotional. It was really crazy to see our names on the marquee because we grew up looking at other artists names on there. The whole night was just surreal.

Moosh & Twist have just wrapped recording for their newest mixtape, Back To The Basement, which they plan to release in early 2013, and their next tour starts up again in February. Tickets for Saturday’s all-ages show at First Unitarian Church are available at our concert calendar here; doors open at 7:30. You can download Up Before The World here, and below watch Team OCD’s video for “Victory” from their A3C Volume 2 album.