Review: Ideal Bread, Sonic Liberation Front and The Gate push the boundaries of jazz at The Rotunda
Artists

Review: Ideal Bread, Sonic Liberation Front and The Gate push the boundaries of jazz at The Rotunda

If the ground seemed to shake in the vicinity of 40th and Walnut on Friday night, it may have had something to do with the triple bill at The Rotunda hosted by Philly “Afro-futurist” ensemble Sonic Liberation Front. To complement the hometown headliners’ percussive array, bandleader Kevin Diehl invited two Brooklyn-based bands with a taste for gut-rumbling low end. The Gate | Photo by Jennifer Brady

Tuba player Dan Peck’s trio The Gate opened with a single 35-minute improvisation that began with a distorted howl that grew slowly and intensely to become a grinding, doom metal sludge before ending with sparse sputters and bleats. Drummer Brian Osborne provided a constantly shifting clatter as bassist Tom Blancarte switched from striking his strings with a drumstick to harsh bowing, to a passage resembling a Japanese koto. At one point he laid his axe aside to stomp violently on the floor of the stage. In the set’s final moments, he bowed a drumstick with one end resting against the body of his bass, generating a jackhammer creak. Peck himself used a variety of effects to turn his tuba into a fuzztone guitar, a moaning wildebeest, or a diesel engine. 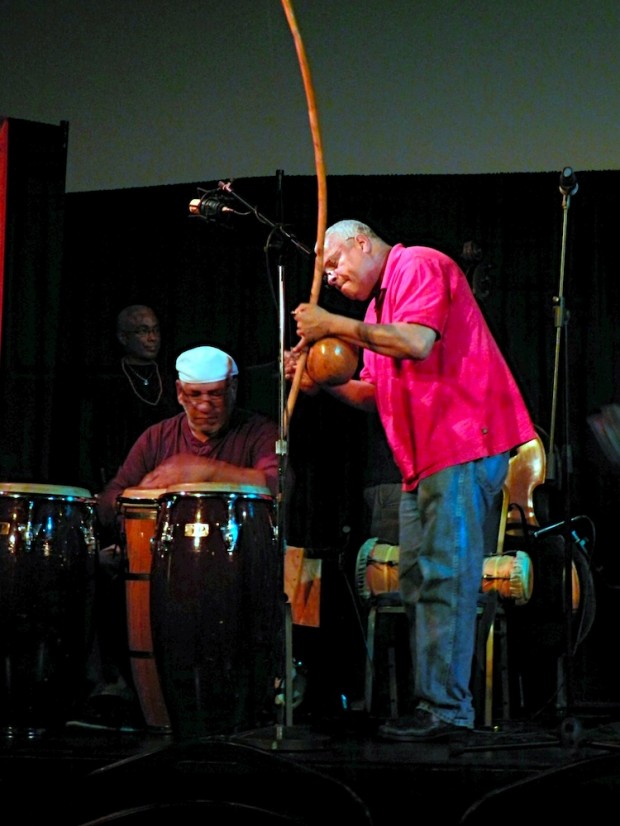 Sinton’s “recompositions” often deviate radically from Lacy’s originals, with open structures allowing a great deal of free improvisation. On Friday, the quartet flowed from one tune to the next, an angular fanfare giving way to Sinton summoning foghorn blasts while trumpeter Kirk Knuffke provided sparse, pointillist clucks and chirps. The quartet’s newest member, Adam Hopkins, switched between acoustic and electric bass, at one point locking into a stop-start metal riff with drummer Tomas Fujiwara. Sinton compared Lacy to the likes of Henry Partch, Marcel Duchamp, and John Cage, and his inventive new takes on the master’s material is certainly in the spirit of those renowned iconoclasts.

Ideal Bread’s set ended with nine of Sonic Liberation Front’s members sitting in on a raucous horn and percussion explosion based on a Lacy piece inspired by a friend’s postcard from West Africa. SLF expanded to eleven for their own set, as always a wide-ranging exploration of the conjunction of rhythmic traditions and avant-garde jazz. They led with “Pow!,” blending a steady, mesmerizing beat with roiling, tempestuous horns; later, they paid apt homage to Sun Ra with “Jetway Confidential No. 3,” the title track from their latest album, with the shimmering celestial guitar textures of current Arkestra guitarist D. Hotep. “Ochun Libre” blended space-age noises with a sound reminiscent of Ethiopian jazz, featuring Diehl in a lively duel with saxophonist Elliott Levin.

As varied as the three bands were, all showcased an interest in exploring the further edges of jazz, where it collides with other musics and continues to evolve. 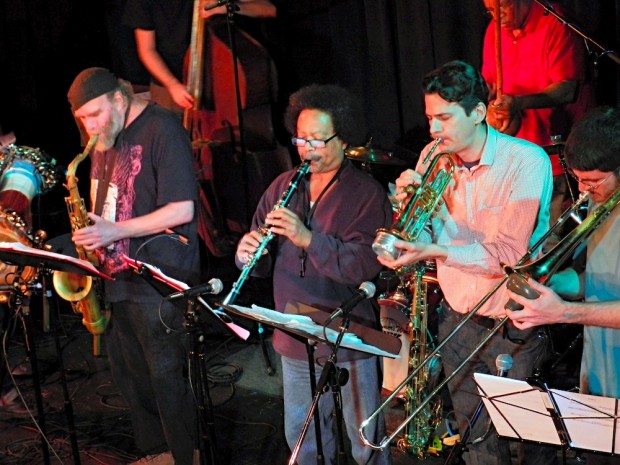