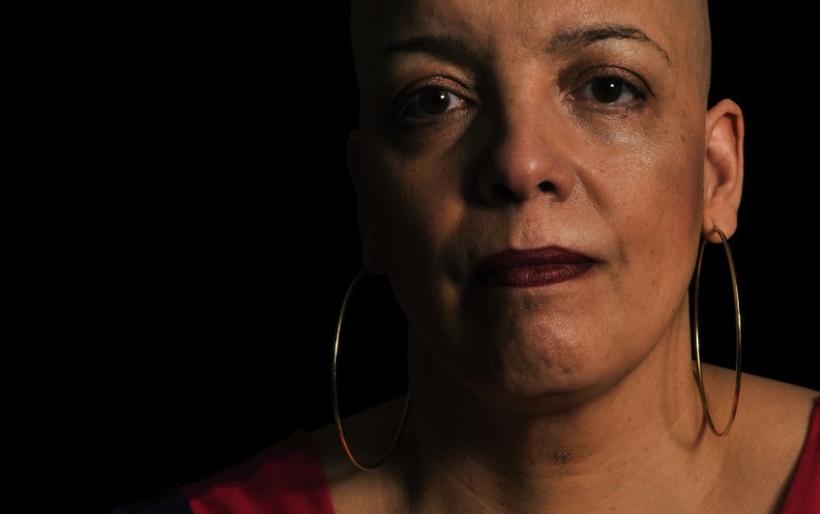 There’s a definite hope implicit in the title of Lili Añel’s new CD, I Can See Bliss From Here. But in its image of a happiness on the horizon, there’s also a dark undertone, an admission that bliss is still something far off, something that needs to be journeyed towards.

That darker side is understandable given what the Philly-based singer-songwriter has lived through in the four years since her last release, 2009’s Every Second in Between. In rapid succession she lost both her job and her hair, the results of the recent economic crisis and her long-running battle with alopecia areata, an autoimmune disease that causes hair loss. After all that, Añel could be forgiven for losing sight of anything resembling bliss, but has maintained an admittedly bitter-tinged optimism.

Añel will be celebrating the release of I Can See Bliss From Here upstairs at World Café Live on Thursday night, with special guest John Lilley of The Hooters sitting in with a band led by her co-producer on the album, Dale Melton of the Melton Brothers. Añel initially met Melton’s twin brother Dennis after a show in Kennett Square in 2007, and confused the two when she later met Dale – a mix-up she’s well acquainted with as a twin herself.

Melton proposed that she record some songs in his Chester County home studio, a suggestion Añel initially greeted with some trepidation.

“When most musicians say, ‘I have a studio,’ you go into their bedroom or basement and they’ve got a couple computers set up and some comforters on the wall,” she says. “Not the case. Dale has a full studio. When you look at the outside it’s a barn, and when you walk through the doors it’s like entering a whole other world.”

Initially intending to test the waters with a couple of songs, they emerged from Melton’s Sandbox at Buck Hollow Farm with the twelve soulful, deeply-felt songs on I Can See Bliss From Here, which fully capture the trials and joys Añel has been living through. The album also includes two covers: a version of Ray LaMontagne’s “This Love is Over” and “Today,” a song by Philly guitar great Jef Lee Johnson, who passed away in January. “Jef was supposed to play on this record,” says Añel, who hopes to record a whole album of Johnson’s songs. “I loved his playing. He had a discography a mile long, and his music was so influential to me. We often talked about wanting the world to hear our music. He was a brilliant songwriter, and I wanted the world to hear him on my record.”

Whether it was the studio’s bucolic surroundings, the hardships of the last several years, or simply Añel’s songwriting gifts, Bliss is the songwriter’s most personal effort to date. The album’s title is drawn from its opening track, “Climb the Wall,” an intimate song about overcoming struggles; “The Best Part of Me” is a gorgeous, delicate balled inspired by her son Joey; and “Something To Do” is directly autobiographical, relating Añel’s childhood in the South Bronx, the death of her mother, and her hair loss.

“That was challenging, because I don’t always want people to know my business,” Añel says. “I’ve been writing that song for a few years. It took time. I had to live life to go back and look at the whole story.”

That story began in New York City, where Añel first fell in love with singing while attending Catholic elementary school in the South Bronx. “We had to go to church every day before school,” she recalls, “and what got me through that drudgery was the music. We had to sing during the mass, and I felt like if anybody had a direct line to god, it was our singing.”

Living in a bad neighborhood, Añel and her sister were rarely allowed to play outside, so their mother compensated by bringing home records once a week from a department store across the street from her workplace. “Every week we’d give her a list of the songs we wanted, and it was always the Beatles. Then on weekends, when she wasn’t working, my mom would take control of the stereo and play Cuban records and Latin jazz. And in the neighborhood we heard James Brown and Aretha Franklin and people on the corner playing rumba for hours. That’s why my music is a hybrid of styles.”

Añel studied music for a year at the Leonard Davis Center of Performing Arts at City College where she had the opportunity to study with jazz singer Sheila Jordan, but soon found that she wasn’t inclined toward the school’s more classical-leaning focus. She found a better fit at the Guitar Study Center, run by Paul Simon’s brother Eddie Simon. “Then after a certain point it was time to take off the training wheels and start going to open mic nights,” she says, which launched her career in NYC’s folk scene.

“I was always the odd duck because my music had rhythm and a lot of different scales and chord progressions because I was listening to people like Michael Brecker and John Coltrane,” she says. “To the people in the folk world it wasn’t plain enough, so I never really fit in. I don’t fit into a lot of scenes, because all of the music I heard growing up is in my music.”

Añel continued to play and record in New York until 2004, when she relocated to Philly. “New York was never the same to me after 9/11,” she says. When she met her now-husband, who lived in Philadelphia, she saw her chance to escape. “He proposed and said he could move to New York, and I was like, ‘Hell no, I’m outta here.’ And I wasn’t aware that Philadelphia had the music scene that it does. It’s very active and there seems to be room for everybody. I got very lucky; I met my life partner and major doors flew open for me here in a way that it wasn’t happening in New York.”

She found a job in legal documentation with the venerable law firm WolfBlock, which turned out to have been involved in the risky financial maneuvers that resulted in the economic recession and closed its doors after more than a hundred years in 2009. The stress of finding herself out of work exacerbated the alopecia that she’d been diagnosed with eighteen years earlier, and she debuted her new, bald look at the Tin Angel in 2010. “I walked out on stage and expected to hear gasps,” she says. “After the first song I introduced myself and said, ‘How do you like my new look?’ People who love you don’t see you how you see yourself. They love you and think you’re fantastic. I guess the audience liked me as well, because they applauded.”

After scrutinizing the mirror for dime-sized bald spots for so long, Añel says that losing her hair comes as something of a relief – though she’s quick to say it’s not a choice she would have made. “I’m not of the Lady Gaga persuasion. You think that if I was a normal-minded female who also happens to be in the public eye, that I would shave my head? When I had hair I had a huge, thick, Angela Davis afro. I had Yoko Ono hair. I didn’t take it off for sport.”

What has gotten her through these difficulties, Añel says, is community. She realizes that in the current downturn, she’s one of millions struggling to find work. And she’s worked closely with alopecia charities, hosting a charity concert at World Café Live to help raise money for the Children’s Alopecia Project (CAP) in 2011.

“The songs on the new record reflect what I’ve been through,” she says. “Therein lies the concept or the thread of the record: facing adversity and getting through it and having hope.”