Review: The Jazz Orchestra of Philadelphia brings the community together for a gala fundraiser at The Kimmel
Artists

Review: The Jazz Orchestra of Philadelphia brings the community together for a gala fundraiser at The Kimmel

Trumpeter Terell Stafford and director Deena Adler founded the Jazz Orchestra of Philadelphia last year with a mission of celebrating the city’s rich jazz heritage. That couldn’t have been more evident at the Philly-centric big band’s gala fundraising concert at the Kimmel Center on Tuesday, which hosted some of the city’s finest talents playing music by some of its favorite sons.

The concert in Verizon Hall began in high spirits as Stafford bantered with emcee (and lifelong jazz booster) Bill Cosby, who arrived sporting a Temple sweatshirt. After a rambling introduction during which he name-dropped venues and DJs and musicians from the city’s past, Cosby taunted guitarist Greg Kettinger to play a bit of the band’s opening number, McCoy Tyner’s “Passion Dance.” After a bit of schtick with Kettinger and the bandleader (Stafford: “He’s got a capo.” Cosby: “What’s wrong with his pants?”), the legendary comedian led the audience in a humalong of the tune. Acknowledging the sold-out crowd, Cosby encouraged Stafford to keep going here at home, discouraging the mention of a Carnegie Hall concert by saying, “Don’t go on the road. Let them come here.” 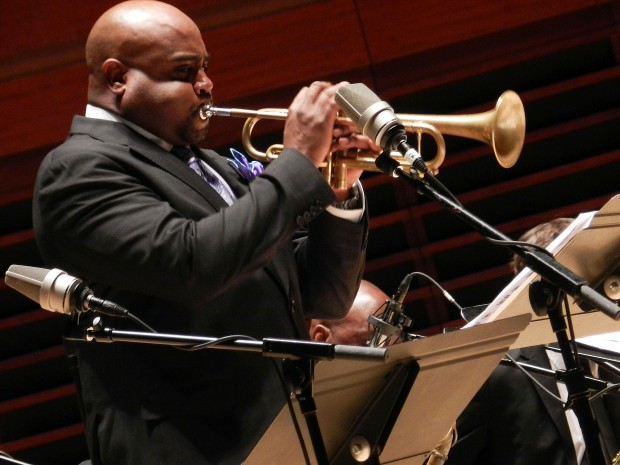 That riotous introduction necessitated a lively follow-up, and the 17-piece ensemble delivered with a spirited arrangement of “Passion Dance” propelled by Chris Beck’s combustible rhythms. Longtime Stafford compatriot Tim Warfield Jr. stated the sultry melody of Benny Golson’s “Along Came Betty” in a short quartet intro before the full band entered, while UArts instructor Chris Farr turned in a graceful tenor solo on a lush rendition of John Coltrane’s ballad “Central Park West.” The chair of instrumental studies at Temple, Stafford pointed out that members of both schools’ faculty in one band is evidence of the city’s jazz community “coming together for the betterment of music in Philadelphia.”

Stafford himself provided one of the evening’s highlights with an extended, thrilling solo on Lee Morgan’s “Candy.” But for the most part he stuck to conducting the band and shined the spotlight on the musicians in the band and, as the night went on, to a succession of high-profile guests. Saxophonist Odean Pope stayed in the audience but contributed his knotty, treacherous composition “To the Roach,” a tribute to the legendary drummer Max Roach.

On stage, the all-star roll call began with pianist Kenny Barron, who applied his impeccable swing to Thelonious Monk’s “Evidence,” in an arrangement that began as pointillist deconstruction and cohered into a lively sprint through the tune’s familiar angles. Next up was trumpeter Randy Brecker, who blasted a clarion solo on his own buoyant “Free Fall.” 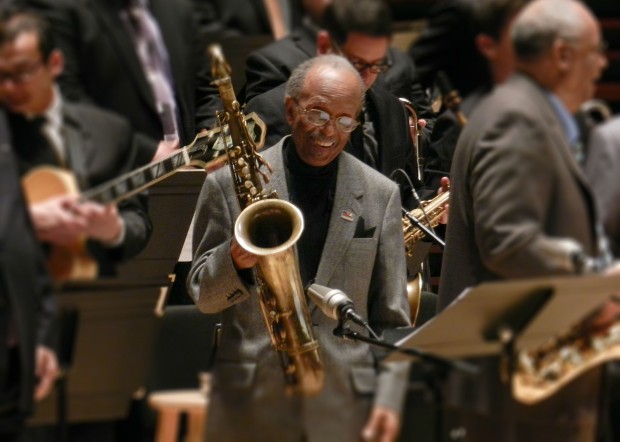 A very special moment followed as three of Philly jazz’s elder statesmen joined forces on Duke Ellington’s “Perdido.” Tenormen Larry McKenna and Bootsie Barnes and altoist Tony Williams played a lively round of deeply-rooted, effortless bop. One of the inspirations for the formation of the JoP, trumpeter Wynton Marsalis arrived next to a standing ovation, essaying an electrifying plunger-mute solo on Ellington’s “Tutti for Cootie.”

The night’s final guest was small in stature but huge in accomplishment. Tenor great Jimmy Heath was all smiles and finger-pistol pointing as he arrived, but soloing on his own ballad “The Voice of the Saxophone” he gave a master class in melody, weaving a deceptively simple, warm and tender heartbreaker. And Heath’s “Gingerbread Boy” provided the occasion for all of the guests to return to the stage for a blow-out, once in a lifetime finale.

The focus on Tuesday night was about showcasing this new endeavor to the city in a big way, and the all-star lineup certainly did the trick. But the band itself comprises some of Philly’s finest musicians, and the most promising part of the evening was how good they sounded on their own, making this band a must-see even on future occasions when the marquee may be a little less top-heavy.